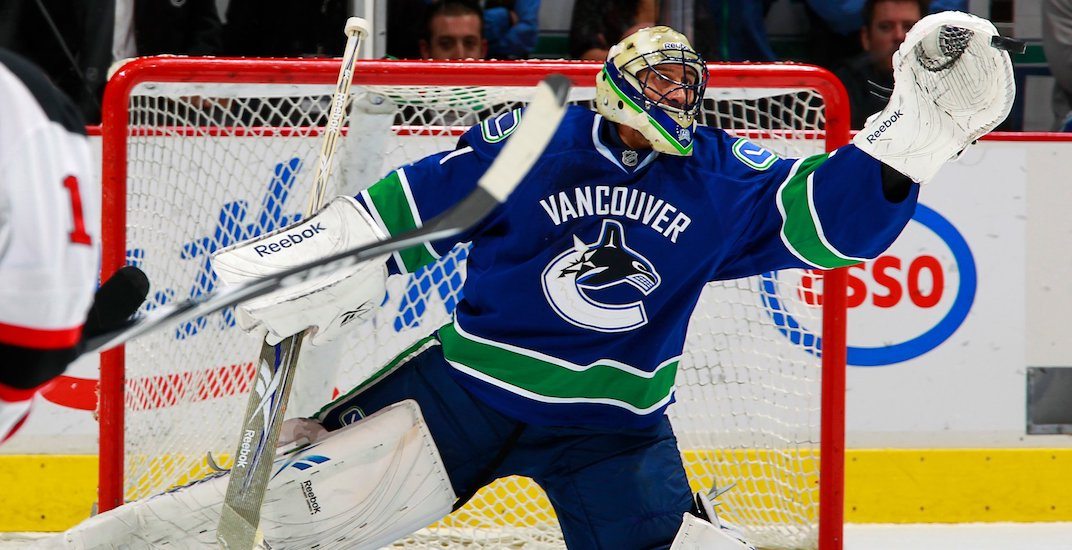 Let’s be honest for a moment, on many nights Roberto Luongo was Alain Vigneault’s game plan.

He didn’t need bounces to make an impact – he was so consistent that he simply was the strategy, especially in the early years in Vancouver. And because of the impact he had on the Vancouver Canucks over his eight seasons here, Luongo deserves to be celebrated the same way the Sedins were when they announced their retirement.

You may be right – after all, the Sedins did spend their entire careers with the orca on their chest. Still, when you think about the stretch Luongo was with Vancouver, the team was identified by two names: Sedin and Luongo.

The three of them were the core of the team and we shouldn’t forget how Luongo served as team captain for two years before Henrik took over the C.

Mike Gillis, Canucks President and GM during the majority of the Luongo era, spoke with TSN 1040 on Tuesday.

“I think the body of work in Vancouver speaks for itself,” he replied when asked if he thought Luongo’s number should be retired at Rogers Arena.

“He was an instrumental part of a very good hockey team when I was there. He deserves that for sure.”

Gillis’s opinion on it is clear, and so is the fact that Luongo is the best goalie in Canucks history.

During his time in Vancouver, Luongo was nominated for the Vezina Trophy twice, the Lester B. Pearson Award, and the Hart Memorial Trophy. He is a slam dunk selection for the Hockey Hall of Fame, and Vancouver was his home for the most magical moments of his career.

Another Canucks player with a similar bio? Pavel Bure.

Just like Luongo, Bure was in Vancouver for only a portion of his career, he was a Hall of Famer (Luongo will be too), yet most of his best moments came with the Canucks.

Perhaps the most convincing argument for Luongo’s number being retired is the way his teammates regarded him. Gillis spoke about this too.

“He was a true professional, a great teammate, one of the hardest working players I’ve ever seen,” said Gillis.

“He was so well thought of by his teammates and the coaching staff that Alain in his wisdom thought he would be a great captain. He didn’t realize the pushback that’d occur from that, but he deserved the honour simply for being such a great person and such a great teammate.”

Alex Burrows, another key part of that team, elaborated on Luongo’s time as captain of the Canucks.

“We never had an issue with Lu being captain,” said Burrows.

When the Sedins announced they were going to retire, hockey fans, media from around the league, Canucks management, and anyone who had been involved with or observed the team during their time in Vancouver celebrated their careers.

They’ve all been doing that for Luongo as well since he dropped his memorable retirement tweet on Wednesday.

Roberto Luongo is my favourite goalie of all time. I can’t say enough how lucky I feel to have been able to watch him up close and cheer him on since 2006.

Congrats on one of the greatest goaltending careers ever, Lu. Can’t wait to see you in the Hall of Fame.

When we joined the Panthers in 2016 my goal was to help one of my all-time favorite players win a cup. My biggest regret is not being able to make that happen for you @strombone1 , but couldn’t be more thankful for being able to witness your greatness #HHOF

Too many great Luongo memories, but one of my in-person favourites was his first game in Montreal with the Canucks. Spent the night in hospital after getting hit in the throat with a shot in practice, then shut out the Habs 4-0.

All jokes aside, Roberto Luongo played a huge role in my life and career. Really got into hockey with those late 2000s Canucks teams. Who knows what I’d be doing now if he didn’t come to Vancouver and help bring a certain level of relevance and importance to hockey. 🙏

Underrated game (arguably the greatest) in Luongo’s career: Game 5 of the Stanley Cup Final. #Canucks won 1-0. Lu stole the game, playing behind a beat up team.

Canucks Nation will come together again when 33 and 22 are raised to the Rogers Arena rafters in February.

The point I’m making here is that fans in this city are ready to give Luongo that same due, to celebrate the man and his career as one of the finest this city has ever witnessed, if given the chance.

He deserves that for everything he did for the Canucks, for the way he led the team.

Luongo deserves to see his number one retired in Vancouver and the outpouring of love that comes with it.