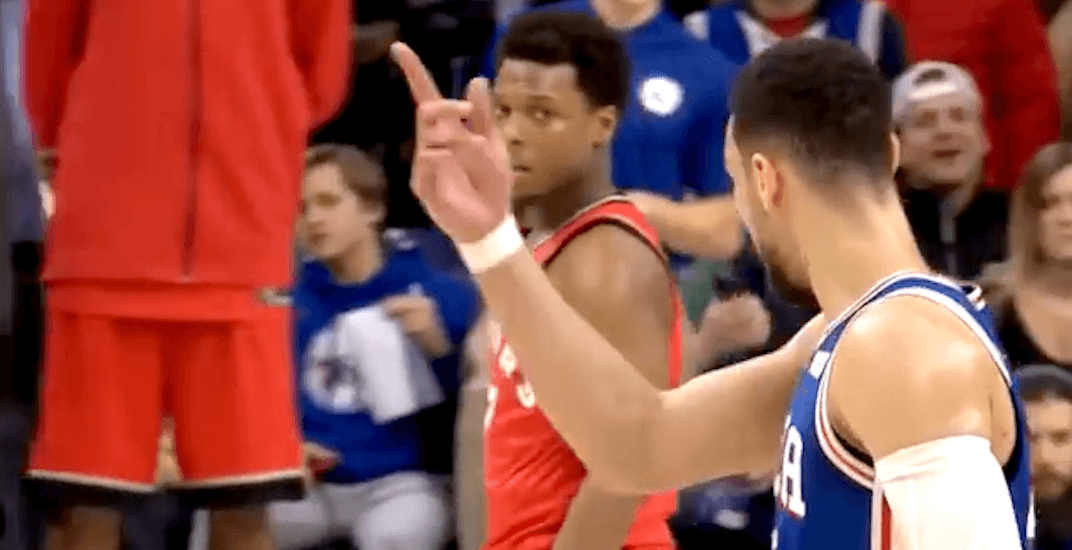 After missing three straight games due to injury, Kyle Lowry had a noticeable return to the Raptors’ lineup on Monday.

Playing in his hometown, he scored 13 points, adding seven rebounds and four assists. But his night ended early when he and 76ers rookie Ben Simmons were ejected after a war of words near the end of the game.

The heated conversation started after a Raptors’ made-basket with less than seven seconds on the clock.

Simmons reached towards Lowry, appearing to trip or undercut him in the process of grabbing the basketball as the Raptors point guard conveniently blocked his path.

Lowry took offence, and after a subsequent foul to stop the clock, he and Simmons engaged in a heated discussion. After the free-throws were made, Lowry wasted no time to get into Simmons’ face, which led to the two being ejected from the game.

As they were leaving the court, Simmons appeared to gesture to Lowry to meet him in the back – with Lowry eagerly sprinting towards the exit.

Looked like Simmons suggested he and Lowry should continue their 'conversation' in the tunnel after both were ejected. Lowry (paraphrasing) said let's go and sprinted to the back.

Philadelphia sports reporter Jon Johnson reported that an altercation occurred between the pair.

Simmons denies anything happened with Lowry. Said, “it’s nothing “.

RE: rumors about Simmons and Lowry getting into it in the tunnel:

Ben Simmons says there was no altercation with Kyle Lowry after the game pic.twitter.com/bA8ko0ASmA

Lowry on Simmons incident: “I don’t know. I guess he thinks he’s somebody.”

Kyle Lowry tried to pursue Ben Simmons after the pair were ejected from today's game, per a source. I'm told Simmons went straight to the locker room; never made contact with Lowry.