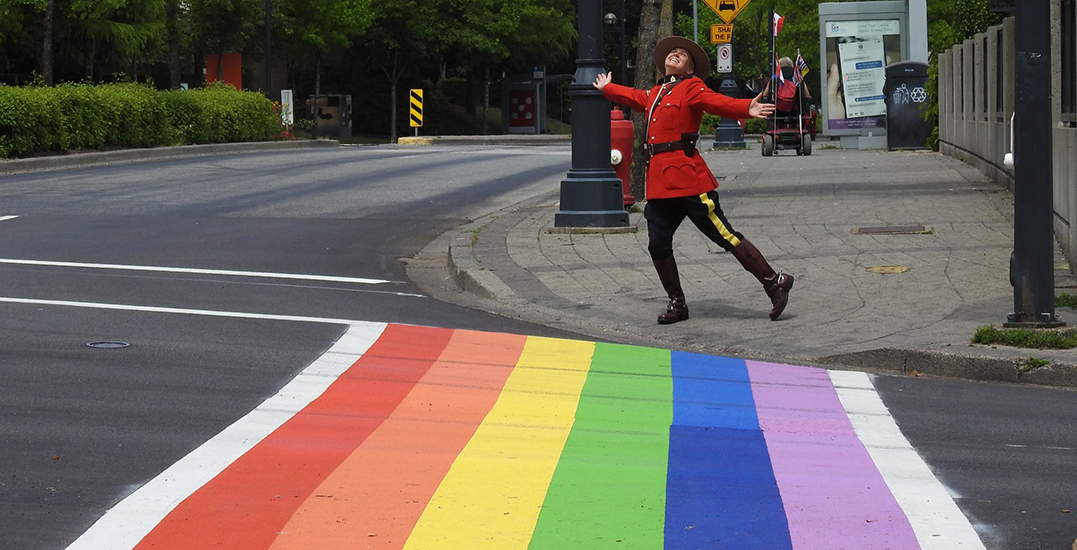 The Vancouver Pride Society (VPS) announced earlier this month that police would no longer be welcome to march in future Pride parades or partake in its festivities.

The organization made the decision last Wednesday, saying that they were joining those across the world in “denouncing the murders of Breonna Taylor, Tony McDade, George Floyd, Ahmaud Arbery, David McAtee,” and other Black and marginalized victims of police brutality.

VPS says that police “are not welcome to participate” in their events and argues that the history of Pride is “righteous in anger, riot, and uprising against police brutality.”

Police across Metro Vancouver have since spoken up, including Corporal Elenore Sturko, a member of the Surrey RCMP. In addition to identifying as a member of the LBGTQ2+ community, Sturko’s ties to both the LGBTQ2+ community and the RCMP stretch back as part of her family’s history.

She tells Daily Hive that while she doesn’t disagree with the VPS’ position, her disappointment comes from her perspective as an LGTBQ2+ police officer.

“I didn’t expect to see my tweet on the news,” she says, referencing a Twitter post voicing her sentiments, that she was “disheartened” to hear about the ban.

“I was surprised by the dialogue and opportunities to have some really interesting conversations.”

“I am in no way disagreeing that we need to plan a better way forward,” she explains. “To find a way so that we can address things that exist. Racism exists. The excessive use of force exists. It’s true that not everyone feels safe in the presence of the police.

“Those are true statements.”

Sturko says that she wishes she could be a part of the conversation, however, and help pave a better way forward.

“I think where we differ is our idea of how we can address the issue,” she points out. “One of the things I’ve witnessed myself is being part of the importance of how we’ve had change in our institutions and our ability to participate in activities in the community such as pride, whether it’s a festival, a parade, or a gathering.”

Sturko says that “it allows the opportunity to not only support the community,” but also to act as a role model for the change she wants to represent.

“Community engagement, whether it’s with pride or with different community events or public events, provides an opportunity for police to interact with the public in a way that’s not enforcement.”

Sturko’s great-uncle was a victim of the LGBT purge, a period of time in Canada that began in the Cold War era and carried on into the 1990s. The government sought to expel LGBT members from public service, under the false belief that they were more susceptible to blackmail and posed a security risk to Canada.

“My great-uncle Dave was part of the RCMP and expelled in 1964,” she says. “They tried to interrogate and identify people they believed to be part of the LGBT community.

Sturko argues that she’s an example of how things can progress and how it’s there’s a constant need to introduce people of colour, Indigenous people, and members of the LBGTBQ2+ community into different institutions.

“I knew my great-uncle’s story before I joined the RCMP,” she says. “I had known that he was part of the purge and here I was, a gay person, coming to the RCMP.”

“It’s important to bring my perspectives as an LGBT person to the RCMP. That remains an important part of how we will navigate our way forward and encourage people of colour, First Nations, LGBT persons to join institutions. Not just the RCMP but places where we want their perspective.”

When thinking back on the decision of the VPS, Sturko says that they’re “definitely on the same page” and hopes that it’s a conversation that they can soon have together, moving forward.

She adds that people are passionate and want their voices heard, pointing out that it’s just as important for her to hear what other people are saying as well.

“We don’t differ in our beliefs that we need to tackle issues,” she says. “And it’s okay that we don’t have all the answers right now. I don’t think that everyone has all the answers about how we’re going to navigate our way forward, but I think as long as there’s a willingness, I think there’s going to be a really good way forward.”

The VPS has limited police presence at parades as early as 2016 when they were asked to remove their armoured vehicle from the Pride Parade.

In 2017, marked vehicles and sirens from law enforcement vehicles were banned. The year after, the decision was made to have no uniforms, weapons, marked vehicles, or sirens allowed in the parade either.