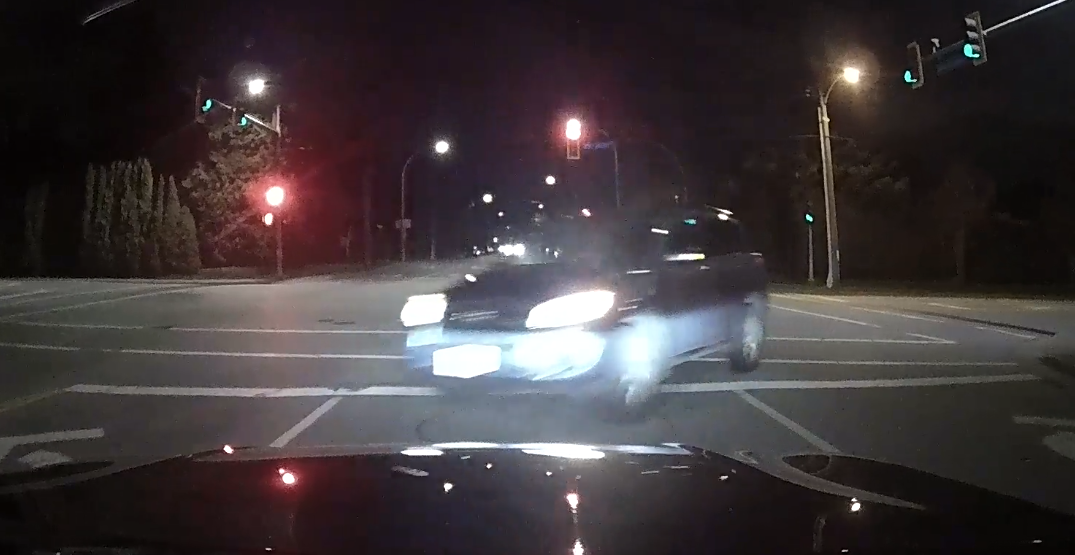 A Metro Vancouver driver shared a video of a close call on the road Sunday night where a car turning left drove into the opposing lane, nearly hitting him.

Jay P., who asked to keep his surname confidential, was approaching a red light at Shaughnessy Street and Pitt River Road in Port Coquitlam around 11 pm when the left-turning car came hurtling toward him.

The other driver was completely in the opposing lane, and Jay had to stop several metres before the stop line to avoid being hit. The other driver honked and swerved to the correct side of the road.

“For that split second, I actually thought I was gonna get hit,” he said. “I know some sloppy drivers cut into the left turn lane as they make the turn, but this person was fully in my lane. Had I not slowed down, I would’ve been hit for sure.”

Jay’s dashcam didn’t catch the other driver’s licence plate. He thought about following them to see it, but instead pulled over to check his own car for damage.

It was apparently a wild weekend on Metro Vancouver roads, with another driver sharing dashcam footage from Friday of an SUV cutting across three highway lanes to make their 1st Avenue exit.

Victor Li, the driver with the dashcam, also had to slow down to avoid being hit.

“It left me feeling shocked and annoyed,” he told Daily Hive.

Others were quick to weigh in when the driver shared the video, with one Reddit commenter joking “good drivers sometimes miss their exits, bad drivers never do.”

The incident happened on Highway 1 while Li was heading into Chinatown from New Westminster.