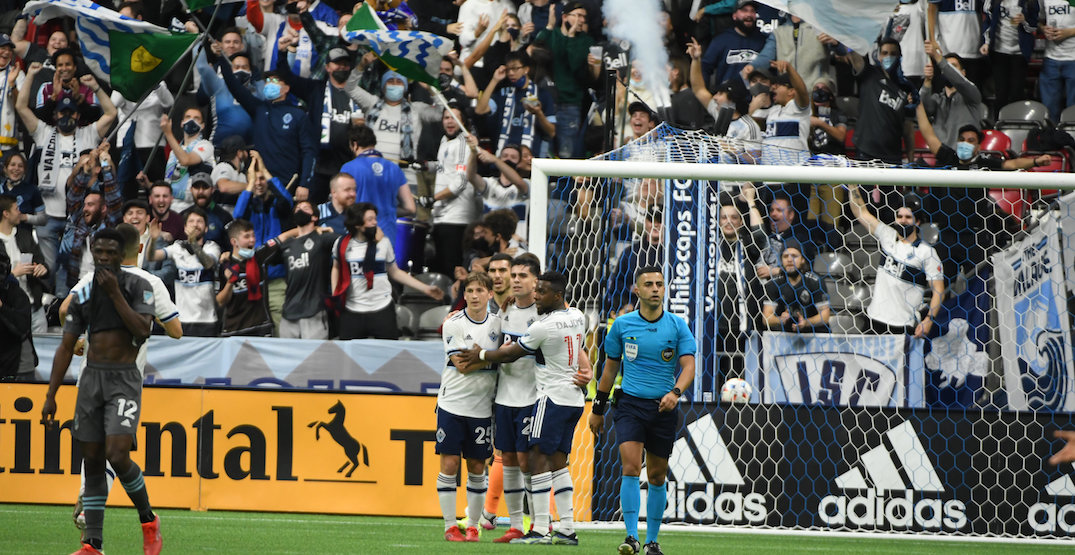 Vancouver is officially on the Whitecaps bandwagon.

Sunday’s match is a hot ticket, with over 21,000 seats sold for Vancouver’s critically important game against the Seattle Sounders.

The regular season finale will be the largest-attended sporting event in BC since the start of the pandemic, and nearly double the size of any other match the Whitecaps have hosted since returning to Vancouver this summer.

The 50% capacity limit on sporting events in the province was lifted on October 24, as only fully vaccinated fans are now allowed to attend. The BC Lions have not played a home game since then, while Rogers Arena’s capacity is under 19,000 for Canucks games.

Make sure you arrive early to the province's biggest sporting event of the year on Sunday, and make sure you're up to date with all of our safety measures! 👇#VWFC #VANvSEA

It’s the biggest match the Whitecaps have played in four years, as the team can clinch a playoff spot with a win or draw for the first time since 2017. It won’t be easy against the West-leading Sounders, who can clinch top spot in the conference with a win of their own.

The Whitecaps could still make the postseason with a loss, though they’d need help from two other teams on Decision Day.

Fans were slow to return to BC Place this season, which is a challenge that many teams in North America are currently dealing with as not everyone is comfortable attending mass events during a pandemic. Everyone in attendance is required to be double vaccinated and wear masks, unless they are actively eating or drinking in their assigned seats.

The Whitecaps started the season with just two wins in their first 12 matches, but they’ve been on an absolute tear since July 7, losing just twice in 21 matches since then.

BC Place has become a fortress for the Whitecaps since returning home in August, as they have won seven of eight matches played on their home turf this season.