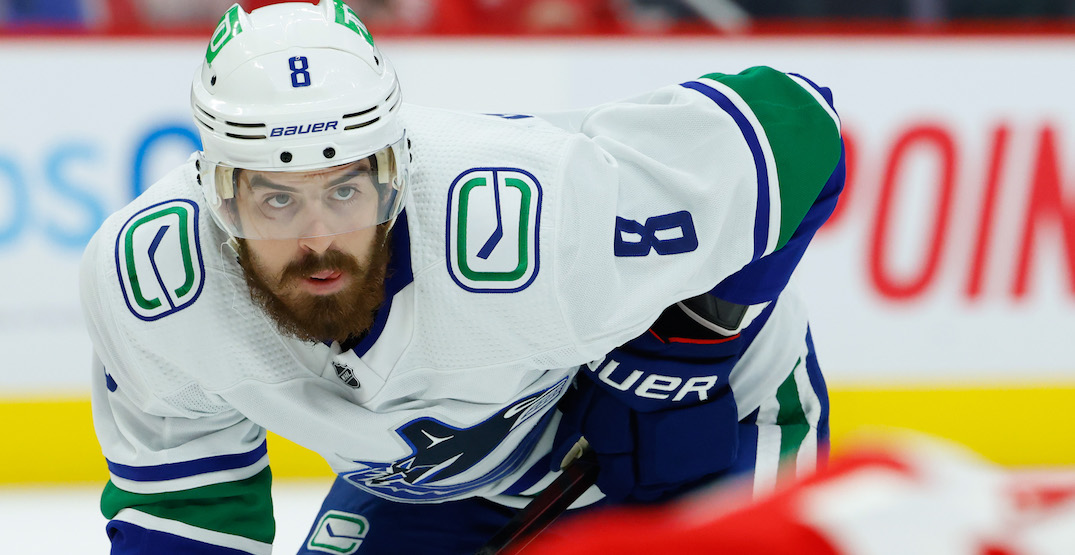 Last season, the Vancouver Canucks were blessed with a new fan favourite in Nils Hoglander. His tenacity and slick puck skills had one local podcast nicknaming him “Short King Nils.”

Well, just one season later, the Canucks have found another forward who is both smaller,  and arguably feistier, than the 5-foot-9, 190-pound Hoglander.

And while he’s shown some slick moves early on in the season, Saturday’s contest against the Detroit Red Wings was his coming-out party.

The 25-year-old was all over the ice, pulling off some dazzling dekes while scoring the Canucks’ only goal of the contest. However, it was his third-period hit against Filip Zadina that kept everyone talking after the game.

That included Zadina, who made headlines by calling Garland a “midget.”

While Zadina and the Red Wings might not be a fan of Garland, there’s no question that the Scituate, Massachusetts native is quickly going to be one of the favourites among this fanbase.

Despite a lack of size, Garland is no stranger to physicality.

We even saw a little taste of this in the preseason, when Garland laid out someone who’s at least a half-foot taller than him.

For the record, although Garland is listed at 5-foot-10 on many hockey websites, he would tell you otherwise.

Conor Garland of the @ArizonaCoyotes shares a little secret about his height during this week's episode of #TheChirp hosted by @darenmillard.

While Garland has already stood out with a couple of big hits early on in a Canucks uniform, this shouldn’t be considered the norm. Last season for the Coyotes, Garland’s 26 hits were in the middle of the pack among his Arizona Coyotes teammates. It’s unlikely that he’s going to be like Tyler Motte and lead the team in hits.

Considering his size, this isn’t a player you want to have dishing out hits on a regular basis. However, it’s a compliment to his on-ice intelligence that he’s able to catch guys not paying attention when he does dish out body checks.

What you can expect from Garland moving forward is that he will be extremely frustrating to play against. Just ask Nathan MacKinnon, the 2019-20 Lady Byng winner. who was fined for throwing his helmet at Garland during an altercation last season.

Nathan MacKinnon got a 10-min misconduct for tossing Conor Garland's helmet at him. 🤭 pic.twitter.com/HdQHogvSut

Garland clearly knows how to play like a pest. We saw it against the Red Wings, and he’s done this in a Coyotes uniform as well.

There’s also a good chance that Garland continues to piss opponents off, not with physicality, but with his ability to draw penalties. Last season, Garland’s 29 penalties drawn was tied with Connor McDavid for second-most in the NHL.

If the Canucks are going to get back into playoff contention, they’ll need players like Elias Pettersson and Garland to continue being league leaders in drawing penalties.

One of the reasons why Garland draws so many penalties? He’s a slippery hockey player.

I could watch Conor Garland twist and turn like this all day #Canucks pic.twitter.com/FbYw1qFfGW

Even during his short tenure in a Canucks uniform, we’ve already seen Garland pull off the spin-o-rama on multiple occasions.

BUT HOW? 🤯@ConorGarland2 with the impossible angle for his for first #Canucks goal. pic.twitter.com/M3Wu899Se2

It’s certainly not the first time that Garland has shown a knack for scoring dazzling, creative goals.

Conor Garland just drove to the net on his backhand, flipped the puck over Karlsson's stick and Melnichuck's pad, and scored. My God what a goal #Yotes pic.twitter.com/MvdhfGhEb7

His toughness has also shone through in the goal-scoring department as well.

Conor Garland scores a goal with his face, gets some treatment and comes back to score the game winner in the third period pic.twitter.com/m5uVGZ38aO

Conor Garland puts his finesse and tenacity on full display with his unofficial first goal in a #Canucks uniform. pic.twitter.com/tliqnJZj5G

Garland has already shown some early chemistry on the second line with Tanner Pearson and Bo Horvat. They contributed the only goal against Detroit and led all Canucks lines with four scoring chances.

He’s also looked sharp on the second power-play unit, where he’ll be a vital contributor all season long.

Garland’s physical play might help earn some brownie points among the fanbase, but his goal-scoring prowess is what fans should love most. His 1.02 goals per-60 at even-strength over the last two seasons is one of the best marks in the NHL. Only Elias Pettersson has scored at a higher rate since the beginning of 2019-20.