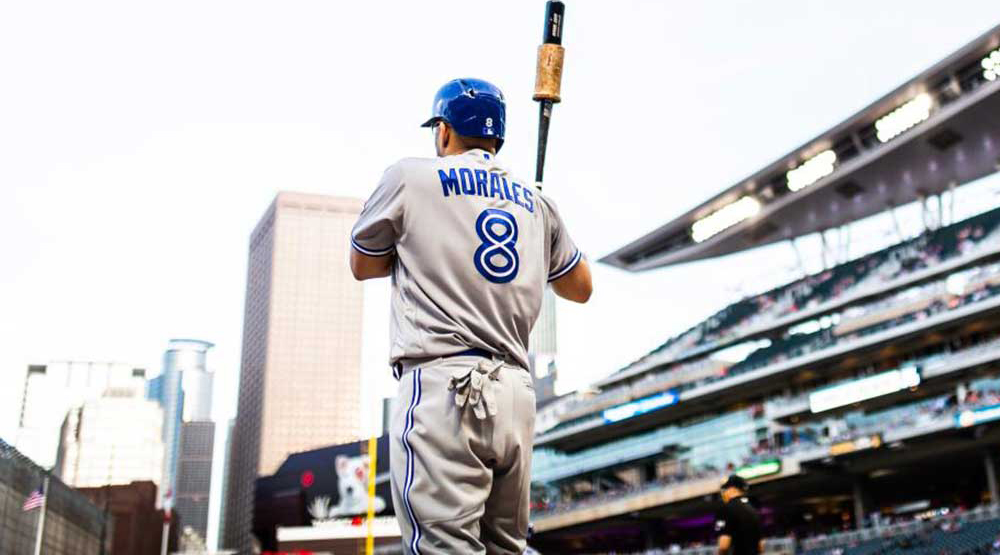 Kendrys Morales had a really, really weird night in Minnesota on Tuesday.

He went from not even being on the Blue Jays starting lineup card, to suddenly hitting at DH, to hitting two home runs, to picking up his first stolen base in nearly a decade.

Morales made his manager John Gibbons look like an absolute genius because the last-second lineup change was a difference-maker for the Blue Jays in their 7-4 victory over the Minnesota Twins.

About 40 minutes prior to first pitch, Steve Pearce was scratched from the game due to a “manager’s decision.” No further information was given at the time and left many wondering why Pearce wasn’t there for first pitch. It was eventually learned that he didn’t play due to a tight ribcage.

And so it was Morales’ time to shine. He wasn’t even anticipating getting into that game against the Twins. Kevin Pillar told Sportsnet he was the one to inform Morales he was pencilled into the game.

Morales suffered no ill effects the short notice lineup change as the 34-year-old designated hitter clubbed not one, but two home runs into the stands at Target Field.

Us: It’s gonna be Morales. pic.twitter.com/f8fSG12c0s

Morales isn’t exactly fleet of foot and has one of the slowest sprint speeds in all of baseball. But that didn’t stop him pulling off the unthinkable and stealing a base. After watching this, anything truly is possible.

You want some Mo? You got some Mo!

… And his first stolen base since 2009! pic.twitter.com/dfhYrALpBX

It was scored as a stolen base, but he was baiting a throw from the catcher in an attempt to get in a rundown, which would allow Kevin Pillar to score the go-ahead run from third base. Morales purposely slowed down towards second base and he still made it in safely.

Mitch Garver – the Twins catcher – didn’t even flinch when he saw Morales jogging from first to second base and he cruised into second with no throw.

Thanks to two home runs, two walks and a stolen base, he collected 0.6 Wins Above Replacement in one single game. It was a banner night for Morales. And ironically, while he was never even meant to take the field that night, he joined an extremely exclusive Blue Jays club.

He became on the 12th Toronto Blue Jays player ever to hit two home runs in one single game and steal a base. It’s happened only 15 times total in the Blue Jays’ 41-year franchise history.

Morales may have expected to enjoy a relaxing night on the bench, but instead, he was thrust into action and had one of his best games in a Blue Jays uniform.