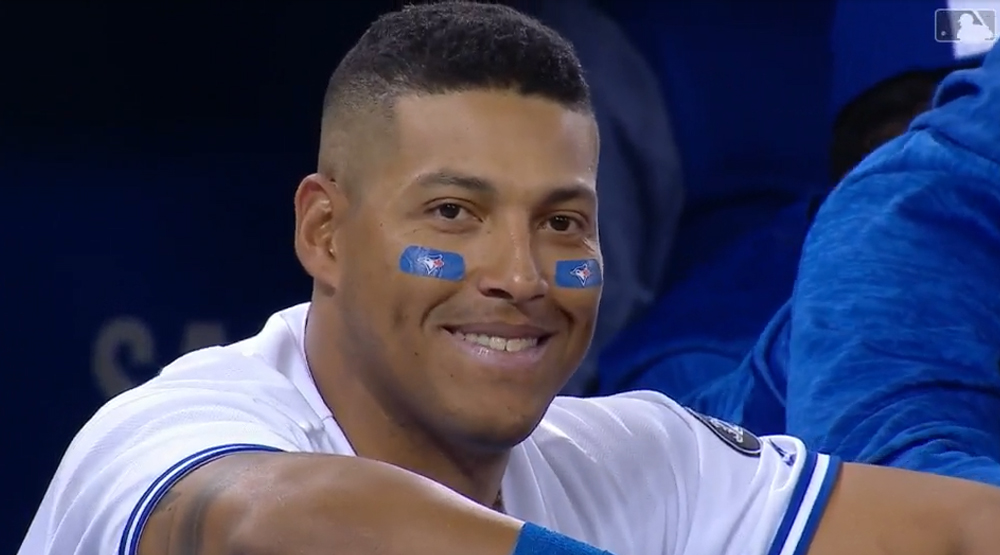 Prior to Opening Day, we chronicled the reasons why Curtis Granderson should be your new favourite Toronto Blue Jays player. With all due respect to the 37-year-old veteran, someone new has emerged to become a fan favourite in Toronto.

The vivacious, infectious infielder has already won the hearts of adoring Blue Jays fans. His on-field persona resonates because Solarte plays the game with the embodiment a little-leaguer. He looks like he’s having the time of his life out there … dancing, clapping, and cheering on his teammates.

Whether it’s his salsa dancing, his patented ‘alligator clap’ after hitting a home run or priceless reactions like the one below, Solarte is everything that’s good about baseball right now. On any given night, you might see him waving his arms around, dancing like no one is watching.

Many have declared him the next Munenori Kawasaki, but Solarte is much more than just a cheerleader for the Blue Jays. While Kawasaki became famous for his interviews and antics in the dugout, he was more-or-less the 25th man on the roster. He was comic relief for the Blue Jays during their dark days of 2013 and 2014.

Solarte is more than comic relief.

After Josh Donaldson was sent to the disabled list, Solarte settled in as club’s everyday third baseman and has taken over as the Jays’ new cleanup hitter. Of the 25 games he’s played so far, he’s batted fourth in all but four of them.

Earlier in the year, John Gibbons had to find ways to get Solarte playing time. Now, the manager can’t afford to keep him out of the lineup.

The Venezuelan native has clubbed seven home runs already and each one of them has been an absolute moon shot. Solarte hasn’t hit a home run less than 400 feet this season and his longest home run so far travelled a staggering 459 feet; the ninth furthest-hit home run in baseball in 2018.

When @Solarte26 gets a hold of one, he gets ALL of it. #SolartePower 🔋 pic.twitter.com/K9gNa0X6AQ

Not only is he expressive on the field, but he has the talent to back it up. His dance moves are legit, but more importantly, so is his talent. The utility infielder isn’t just a fun guy to have around; he’s an integral part of the Blue Jays roster.

Even when Donaldson returns from injury, it’s difficult to see Gibbons leaving Solarte off the lineup card. The beauty of having a multi-positional player like him is the Blue Jays can plug him in at multiple positions on the diamond. Third base, shortstop, second base, first base, occasional Flamenco dance teacher… so long as his bat’s in the lineup, the Blue Jays will find somewhere to play Solarte.

Life advice: Love something as much as @Solarte26 loves his team. 🕺🏽🕺🏽 pic.twitter.com/X0SPoPBoDy

Now that the Blue Jays are one month into their 2018 campaign, Solarte has been their best player so far. Many foresaw him as a nice complementary piece to this Blue Jays roster; not someone who would drive the bus on offence for this team. If anything, it was Randal Grichuk who has the prized offseason acquisition, not Solarte.

The two could not be any more polar opposite right now with Solarte exceeding all expectations, hitting .231/.336/.495 with seven home runs and 14 RBIs. Meanwhile, Grichuk is having an abysmal start to the season, batting .106/.208/.227 with just two home runs and seven RBIs.

One reason why so many fans gravitate towards Solarte? It’s because he’s a living, breathing reminder that this is all just a game. This is people’s livelihoods and millions of dollars are on the line here, but he looks like someone who’s thankful do something they adore.

If Solarte wasn’t already your new favourite Blue Jay, he will be soon. All aboard the “Solarte Party.”

Just give Solarte his own dedicated TV camera already. pic.twitter.com/gqWDFf6smK