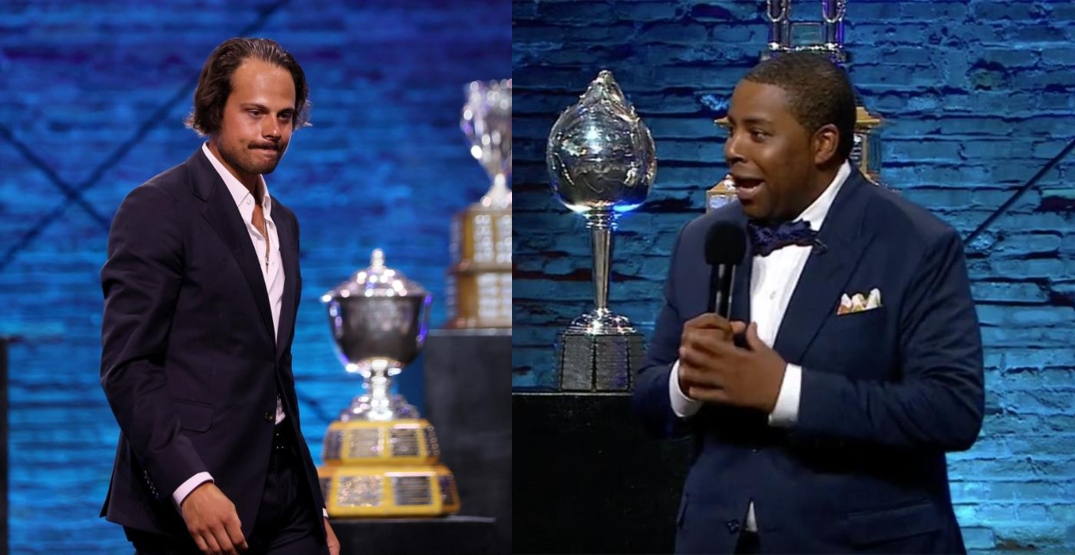 Tuesday’s NHL Awards were a big night for Auston Matthews.

The Toronto Maple Leafs superstar was named the recipient of the Hart Trophy, awarded to the player most valuable to his team. He also won the Ted Lindsay Award, given to the most outstanding player as voted by the players.

Despite the heavy hardware, things turned bittersweet for the 24-year-old as the evening came to a close. At the very end of the broadcast comedian Kenan Thompson, who hosted the show, dropped a subtle but brutal diss to the Leafs and their fans.

“Congrats to Auston Matthews,” said the SNL cast member. “It’s nice to see the Leafs winning something in June.”

“Congrats to Auston Matthews, it’s nice to see the Leafs winning something in June” pic.twitter.com/es5rPtgIDF

The ceremony ended abruptly after the comment and no player reactions were filmed. But, social media — as it often does — went into a frenzy in reaction to Thompson’s comments.

(Hey, at least nobody got slapped à la Will Smith…)

Thompson, who starred in D2: The Mighty Ducks as a child, hosted the awards show back in 2019. Who knows if he’ll be asked back now.

To be fair, the joke was not inaccurate as the Leafs have not advanced to the second round of the playoffs since 2004 and currently hold the NHL record for the longest Stanley Cup drought in league history (55 years).
As a result, reactions among hockey fans were mixed. Some thought the joke was in good taste but others had nothing but disdain for the Emmy-Award winning comedian.
Here were some notable Twitter reactions:

Leafs fans are going to need some heavy duty ointment for that burn. pic.twitter.com/xDUh5UHWm2

As if we need your opinions on hockey.

The feed ending immediately after was comedy gold lmao

Someone should change the Leafs wikipedia page to reflect the team’s new owner, Kenan Thompson

🤣 Kenan Thompson slips in the best burn of the night just as the show ends. #NHLAwards https://t.co/gHQWizJO1O

Cheap shot Kenan. Your not wrong but it’s still a cheap shot. LOL.

I’m a die-hard Leafs fan and think that joke is awesome. Management might feel differently, but that’s on them….

leafs fans to kenan thompson after his comment at the end of the award ceremonypic.twitter.com/26OLAlQgNu