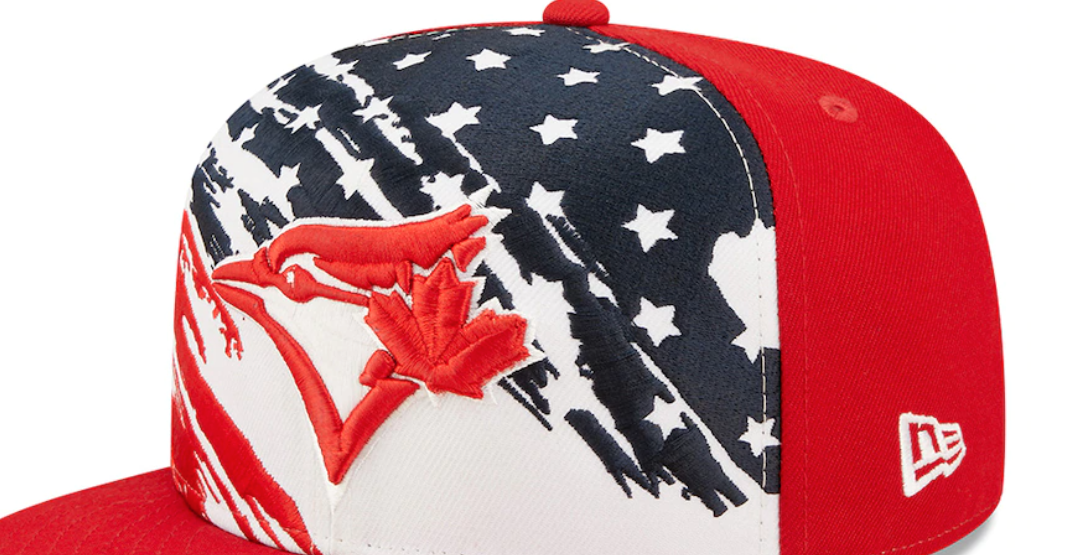 The Toronto Blue Jays were part of a new MLB hat rollout for Independence Day, celebrated in the United States every year on July 4.

It’s one of the biggest holidays on the American calendar, known for barbecues, fireworks, concerts, and any other way to simply have a good bit of patriotic fun.

Each of the 30 MLB teams were given a new stars-and-stripes featured design in order to honour the celebration of the ratification of the Declaration of Independence on July 4, 1776.

There’s just one obvious problem with the hat: the Blue Jays, as you’d likely know, don’t play their home games in the United States.

Blue Jays fans (and others) took to Twitter to express their frustration, anger, and more than anything else, confusion with the bizarre hat.

This is the worst hat I've ever seen. https://t.co/wkLhKSXU1k

Hey @BlueJays I'll ask the question:
What IS this? pic.twitter.com/HCrD8nZJEw

I don't know any Canadians who would buy this hat. Me included. #BlueJays https://t.co/PHXttia1qg

This is the ugliest Blue Jays’ hat ever made. pic.twitter.com/20CSH7ME5x

Given that Canada Day is July 1st so the two holidays often share a weekend, wouldn't it be fairly simple to just do Canada Day hats for the Jays? https://t.co/kSgkPDqk9x

Quite literally the ugliest and most nonsensical Blue Jays hat I've ever seen… I get stars & stripes look for the rest of the clubs but come on… #BlueJays #NotNextLevel pic.twitter.com/G4WDaYFOxE

Some people are pushing back on this by saying the Toronto Blue Jays do not need a Fourth of July hat. I'm going to push the other way and say please match this by giving the 29 U.S.-based teams a Canada Day hat. https://t.co/yC7cbpcfR0

1. The Blue Jays aren’t an American team. 2. Where is the Canada Day Hat?! Why should the Blue Jays be forced to celebrate the Americans on July 4th (the only Canadian Team) but none of the 29 American teams have to wear a Canada Day hat. This is disgusting! #NextLevel https://t.co/lu5xoyTAfu

This assault to eyeballs costs close to $50, but I don’t think there is a dollar amount you could pay me to wear it. pic.twitter.com/L7I0WOTWfJ

@BlueJays you cant srsly call yourself Canada’s Team & wear this ridiculous hat! Visiting teams dont wear the maple leaf when they visit on Victoria/Canada Day(nor should they!) So why are the Jays expected to cover themselves in the stars & stripes for Memorial/Independence Day? pic.twitter.com/cqIrNeF05O

They do realize the blue jays aren’t an American team right? Who the hell would buy this?!

The Jays will be playing in Oakland on July 4.