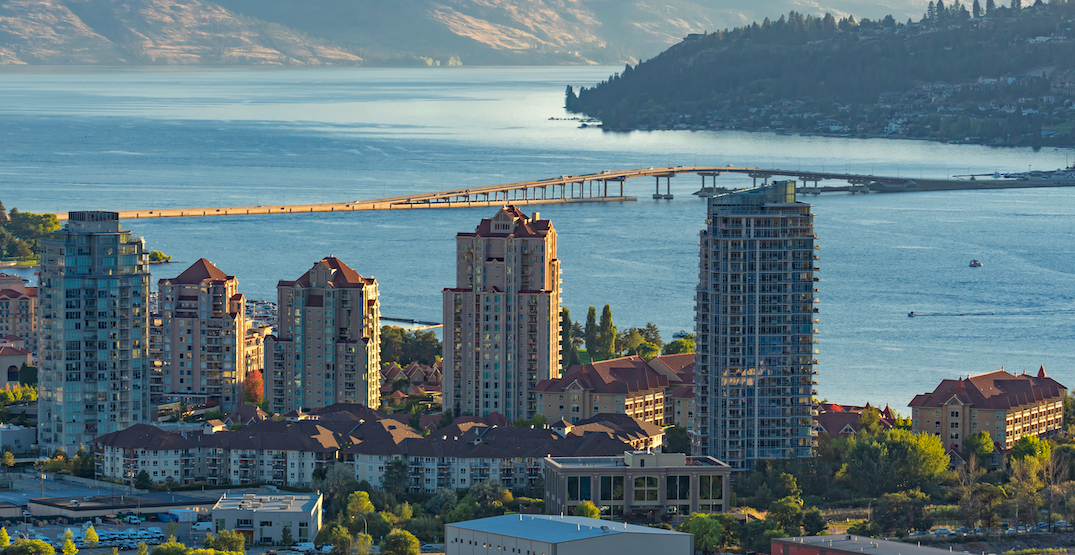 Downtown Kelowna towers, with Okanagan Lake and the William R. Bennett Bridge in the foreground. (Shutterstock)

Kelowna, and the surrounding Okanagan region, is booming. This is clearly noticeable in the downtown core where several large tower projects have recently risen, with many more starting construction and proposed.

In fact, as of 2020, Kelowna has become the fourth fastest-growing urban area in Canada.

In stark contrast to this momentous growth, upgrades to critical transportation infrastructure in and around Kelowna are at a near standstill.

On the provincial level, the proposed upgrade of Highway 97 through Peachland — the last remaining single-lane stretch of highway between Penticton and Vernon — has been deferred for decades.

As for a second crossing over Okanagan Lake, also deferred for decades.

The upgrades to Boucherie Road and Westlake Road intersections are apparently trapped in a void with no significant recent update. 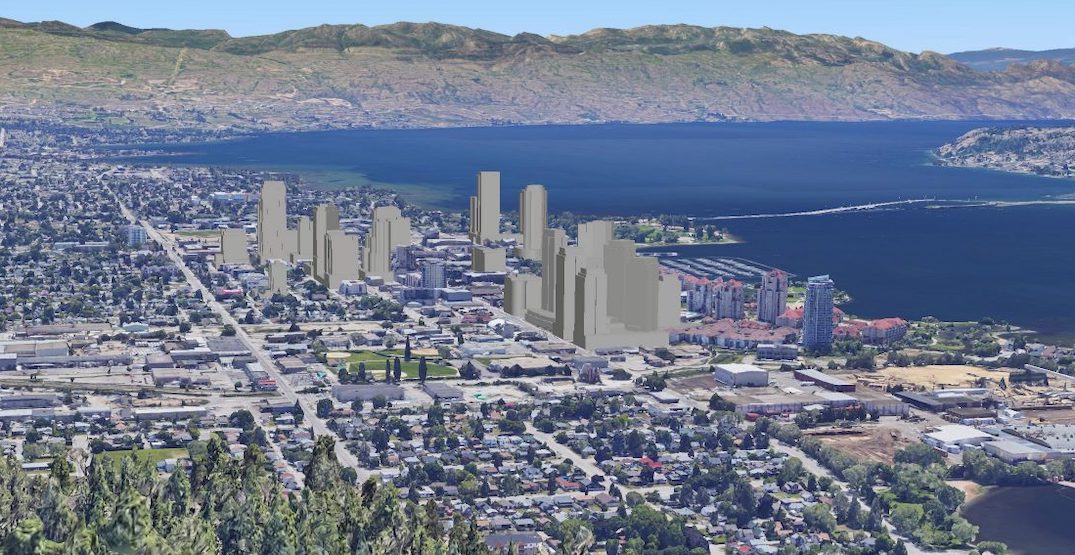 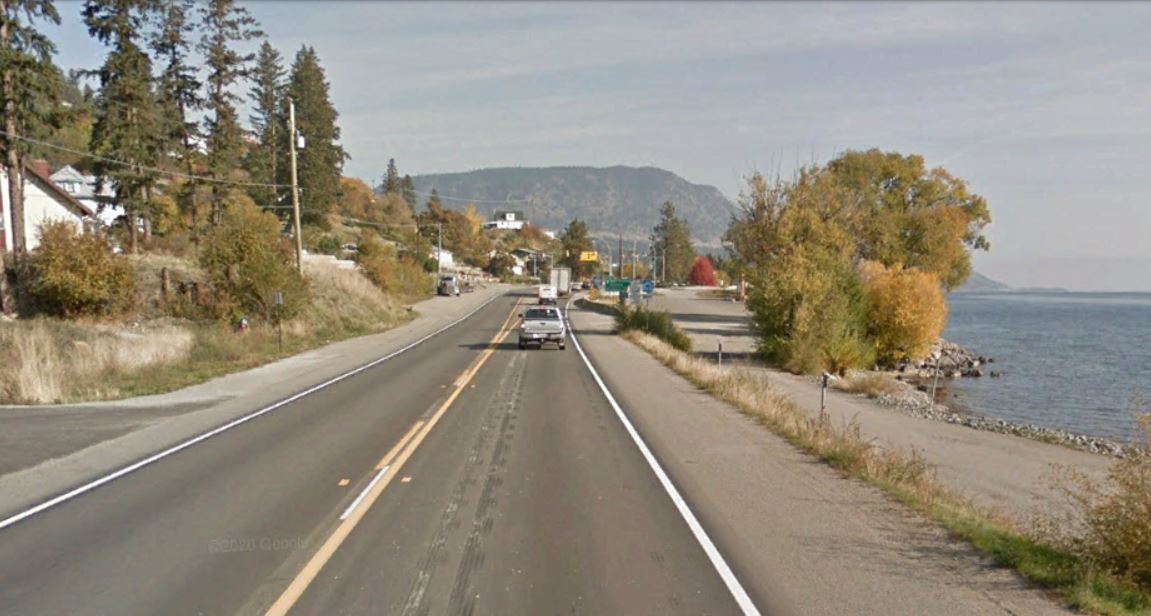 Current condition of highway 97 through Peachland, cutting the community off from the lakeshore. (Ian Ius/Daily Hive)

This lack of investment from the province has frustrated and downsized local transportation planning as well.

For years, the City of Kelowna was decided on building a free-flowing route that would have largely replace Harvey Avenue as the primary transportation corridor for the region. This route was to run along Clement Avenue, which between Gordon Drive and Spall Street, is already nearing a controlled access built standard.

From the current terminus at the Spall Road intersection, which would have been upgraded to an interchange, this highway bypass would have largely continued along the brownfield CN Rail corridor to UBC Okanagan, where it would have merged into the existing Highway 97 corridor. 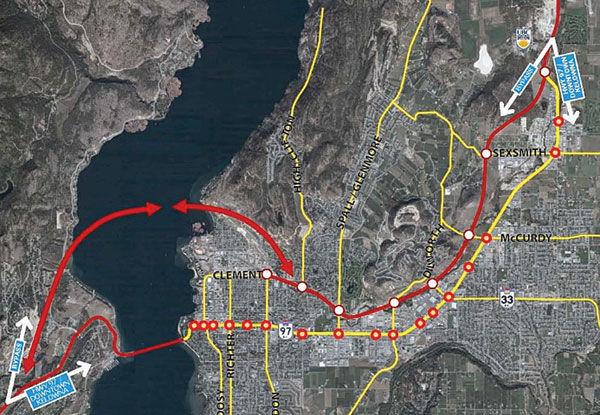 Once proposed freeway bypass through Kelowna along Clemet Ave and CN Rail corridor. (The Daily Courier)

The conceptual interchanges planned for this route, such as with Highway 33, were appropriately confined and didn’t intrude upon the existing urban fabric.

Indeed, this was a well-planned project able to give Kelowna and the Okanagan a worthy free-flow route through the city with minimal land acquisition. Unfortunately, this vision was largely dependent on the construction of a second lake crossing by the province, which was denied.

Recent drafts of this plan, as outlined in Kelowna’s official 20-year transportation policy, have been majorly downsized.

Clement Avenue is still to be extended beyond Spall Road, but now only as a two-lane arterial road with at-grade intersections. It is also only expected to reach as far as Highway 33 by 2035. This is likely to make little to no reduction in Harvey Avenue’s traffic volumes and role as the primary corridor through Kelowna. 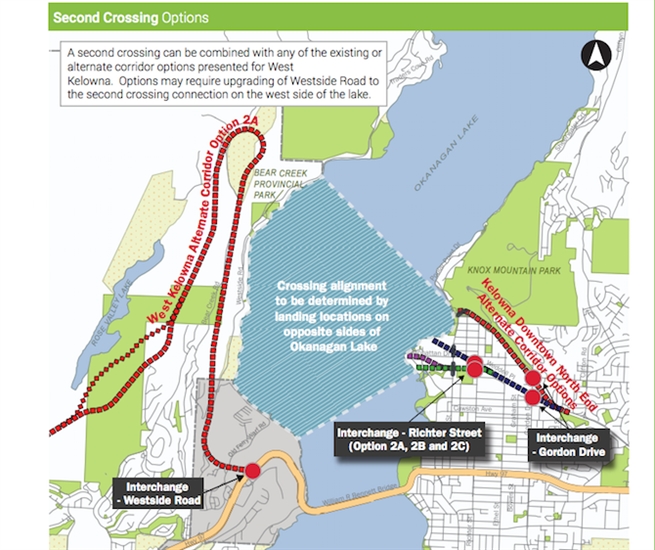 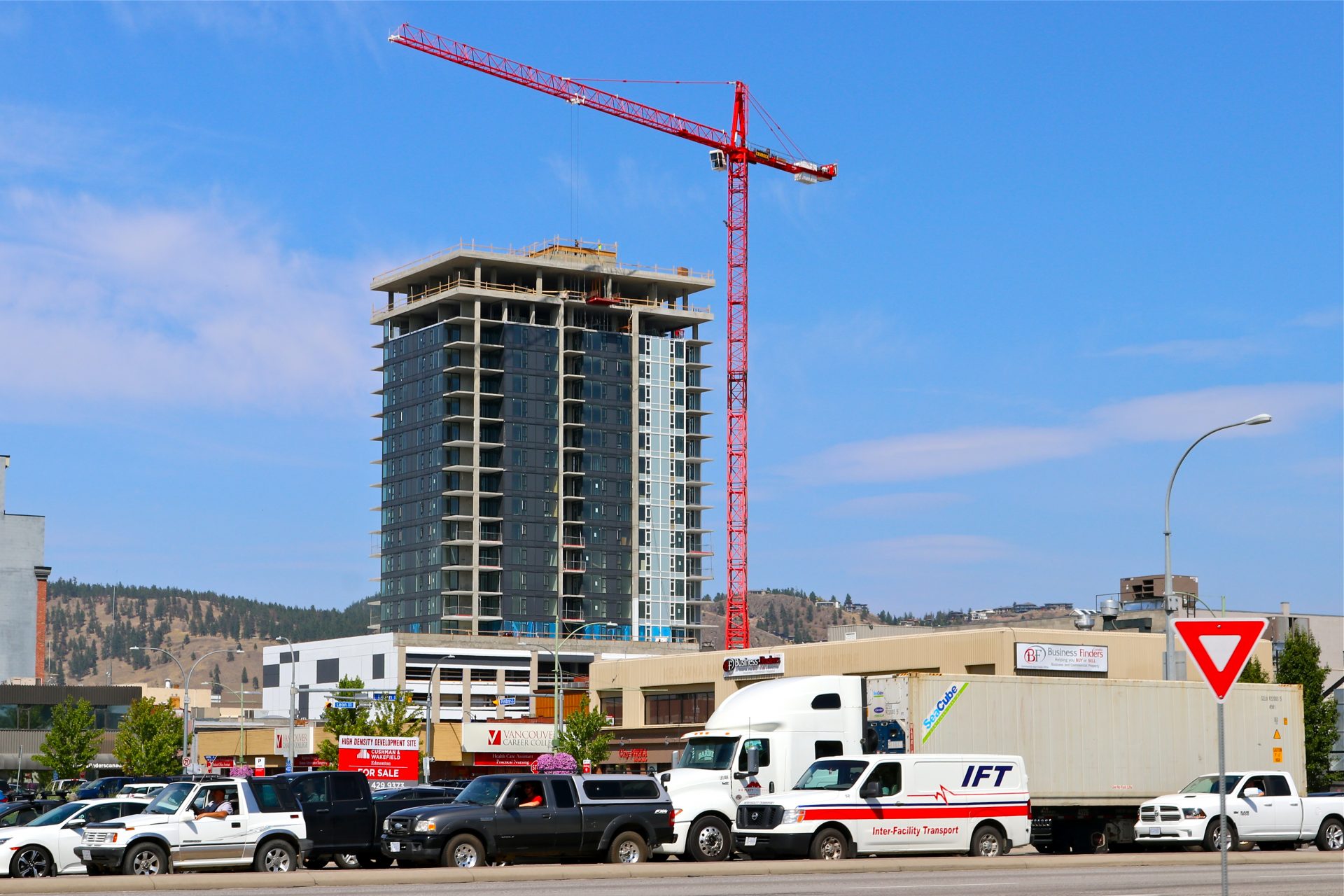 While disappointing, it is hard to blame the City of Kelowna for this downgrade.

It is unreasonable for any municipality to be responsible for the management and cost of constructing the primary free-flowing regional highway through its urban area.

This project should have been uplifted by the province with assistance from the federal government.

However, what the city of Kelowna can do to help though, is construct the reduced in scope Clement Avenue extension in a manner where it can still be easily upgraded to a free-flowing controlled access corridor when provincial help becomes available.

This situation perfectly displays the complete lack of a cohesive transportation plan for the Okanagan that could provide the region with an appropriate backbone for its road network.

Having such a plan would be highly beneficial for traffic, local traffic, commercial traffic, public transit, and the affected communities in general.

At a minimum, the entire Highway 97 corridor from Peachland to Lake Country should be compiled into a single master transportation plan, upgrading the highway to free-flow controlled access standards. A reasonable time frame for this project should be no longer than 10 to 15 years.

From north to south, the first section would involve constructing a four-lane bypass around Peachland. This would allow the current highway corridor, which runs along the lakefront, to be downgraded for local use, with the potential for full removal in select areas. When complete, such an upgrade would finally allow Peachland to have a true pedestrian-friendly waterfront for the community. 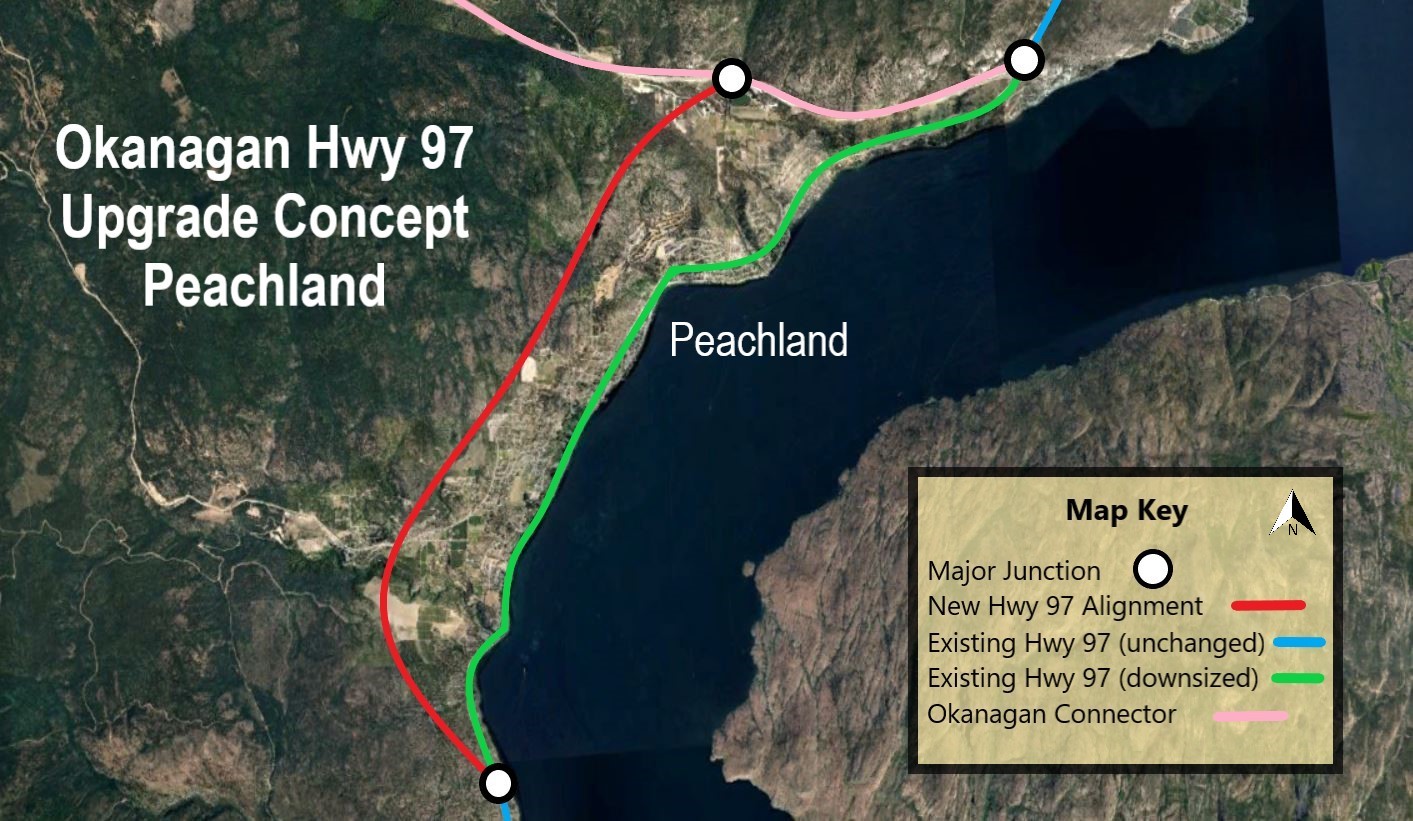 The next portion that requires a complete rebuild is through Westbank.

The current alignment has Highway 97 split into two one-way “local” streets that dissect the downtown core, highly restricting any urban improvements. This is arguably the most challenging segment in properly upgrading Highway 97 to a modern developed world-design standard.

One option would be to continue the Peachland bypass along the western edge of Westbank and West Kelowna on the mountainside. This would completely remove Highway 97 from its current alignment between the southern tip of Peachland to Kelowna.

The other option would be to construct a roughly 1.2-kilometre long tunnel below downtown Westbank between Glencoe Road and Gellatly Road. This would remove all through traffic from the urban streets of Westbank, creating a far more pedestrian-friendly atmosphere.

If the tunnel option is selected, the segment through West Kelowna from Gellatly Road to Westside Road would only require a relatively simple upgrade of the existing Highway 97 corridor to freeway standards. This stretch would best be upgraded to six lanes from the current four-lane configuration to allow the implementation of a bus rapid transit system.

Around Westside Road, the new alignment of Highway 97 would divert north to a new second lake crossing that would connect to the aforementioned upgraded Clement Ave. The original plan of a free-flowing four-lane corridor between Spall Road and the UBC Okanagan campus would be realized.

This project would not only supply an adequate transportation backbone through the Central Okanagan, but it would also allow the implementation of major public transit and pedestrian improvements to the urban realm through Kelowna.

With such a new alignment of Highway 97 in place, the entire stretch of Harvey Avenue from the lakeshore to UBC Okanagan could be properly downsized and traffic-calmed. First and foremost, one lane in each direction along Harvey Ave would be re-purposed as dedicated rapid bus lanes. 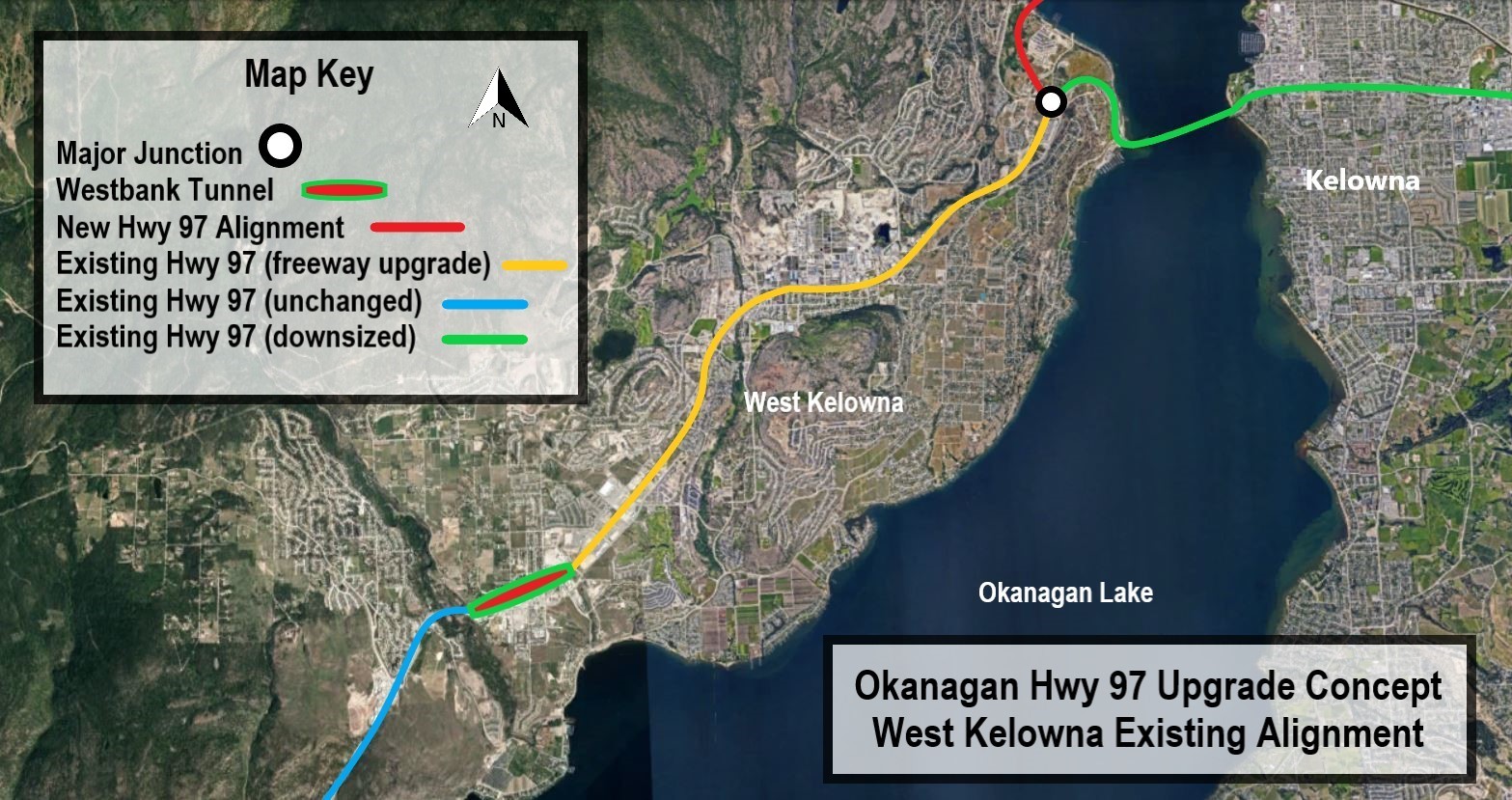 Initially, this would be a rapid bus system but designed with the future ability of LRT conversion. The segment between Pandosy Street and Spall Road could be reduced even further, consisting of one vehicle traffic lane, two rapid transit lanes, bike lanes, and reclaimed pedestrian and commercial space.

With a second lake crossing in place, carrying the new realigned Highway 97, even the William R. Bennett Bridge could be reduced from five lanes of traffic to four. The outermost southbound third lane would become a cycling and pedestrian path.

From UBC to Lake Country the existing alignment of Highway 97 would be upgraded to freeway standards with the reconstruction of intersections into proper interchanges.

This plan, or something similar, is what Kelowna and the Okanagan need in order to achieve a true long-term transportation solution. It would require cooperation between all levels of government, with the provincial government at the helm.

The current approach, involving a two-lane arterial Clement Avenue extension, decade-long single interchange upgrade programs, and 20-year deferred bypasses is the worst of both worlds. It offers no true opportunities for quality public transit initiatives, provides no major improvements for the movement of people and goods through the region, and offers extremely limited possibilities for improvements to the pedestrian realm.

Without a plan that involves major realignments and upgrades to Highway 97 through Kelowna and the Central Okanagan, every project will add up to simply spinning one’s wheels.

A detailed look at the potential urban improvements a realigned Highway 97 could unlock along Harvey Avenue. (Ian Ius/Daily Hive) 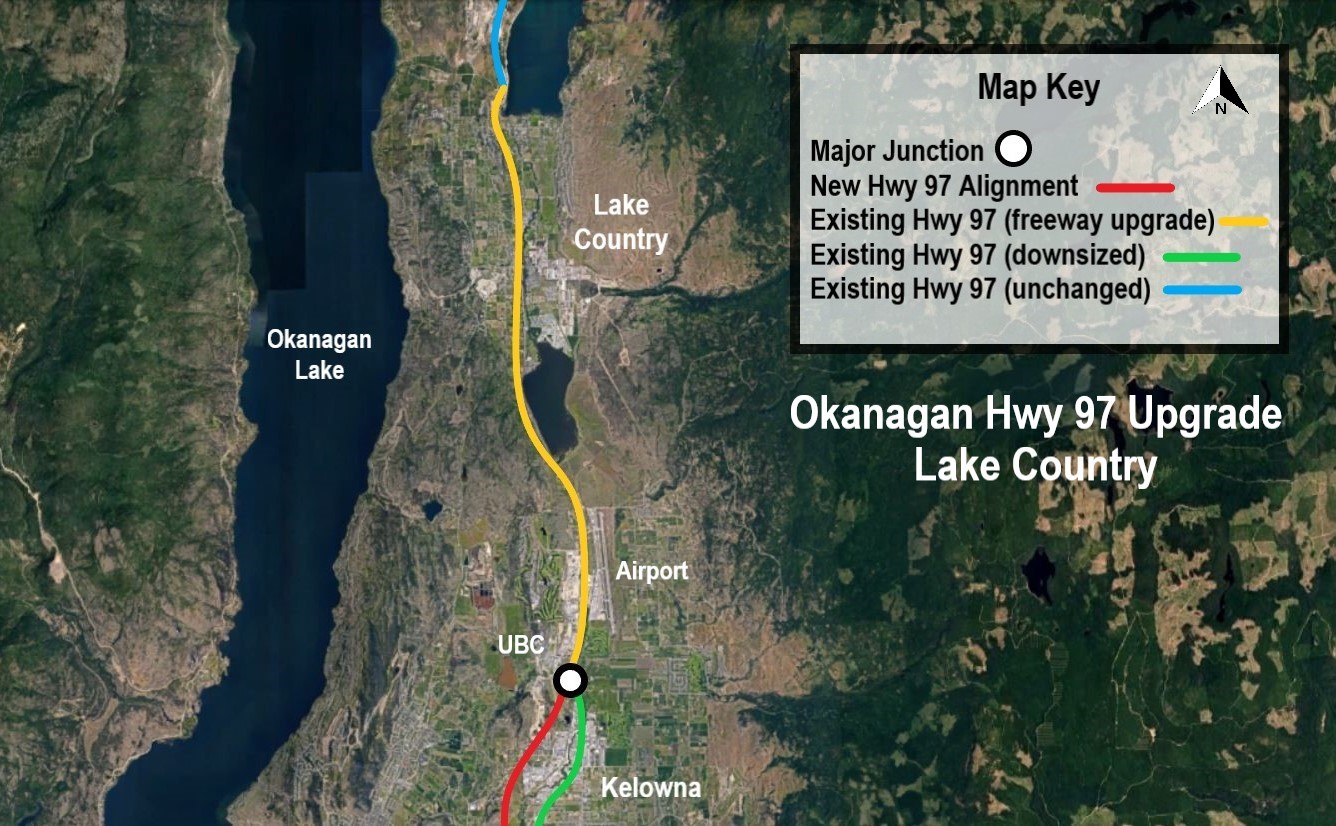 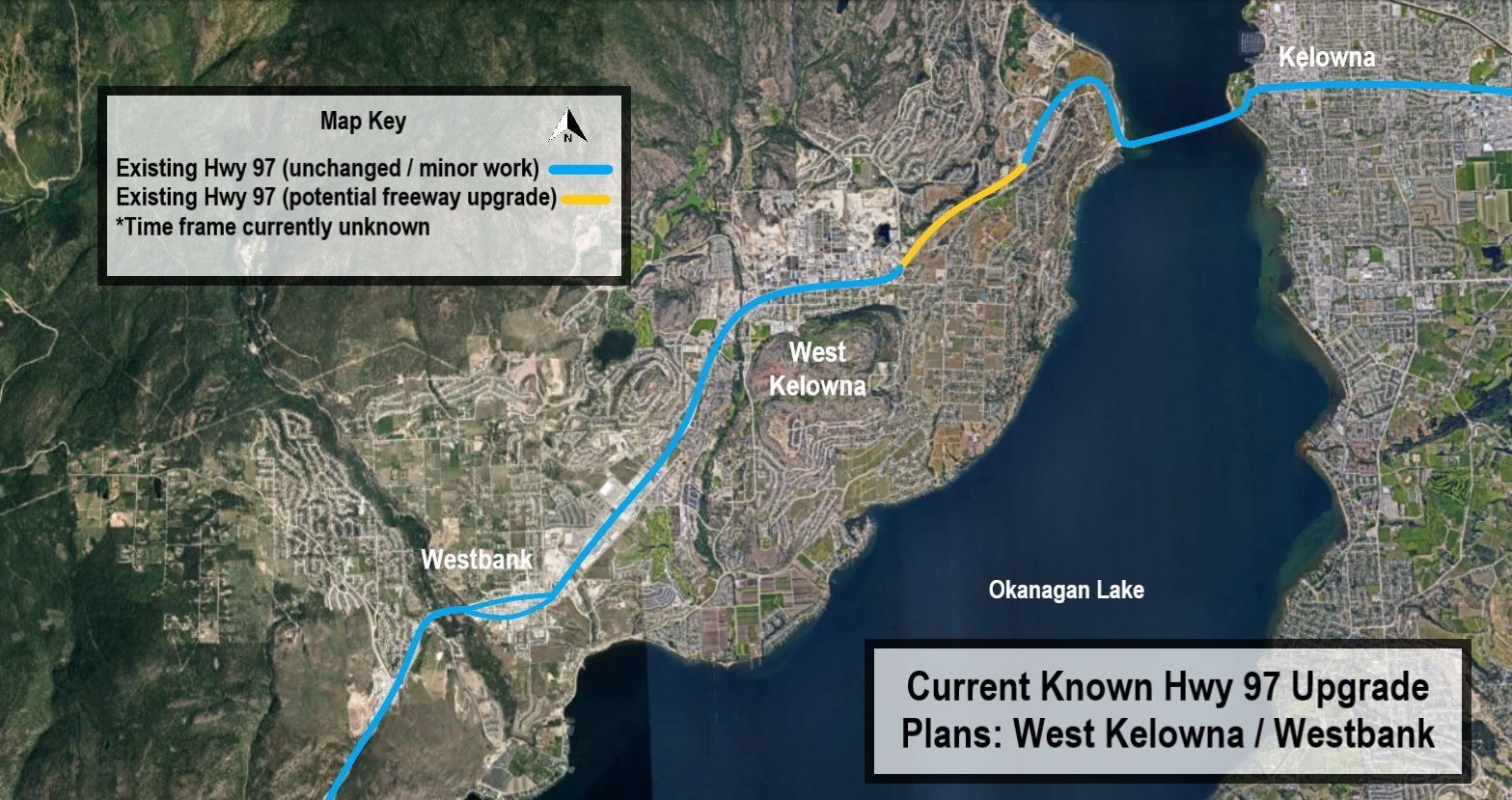 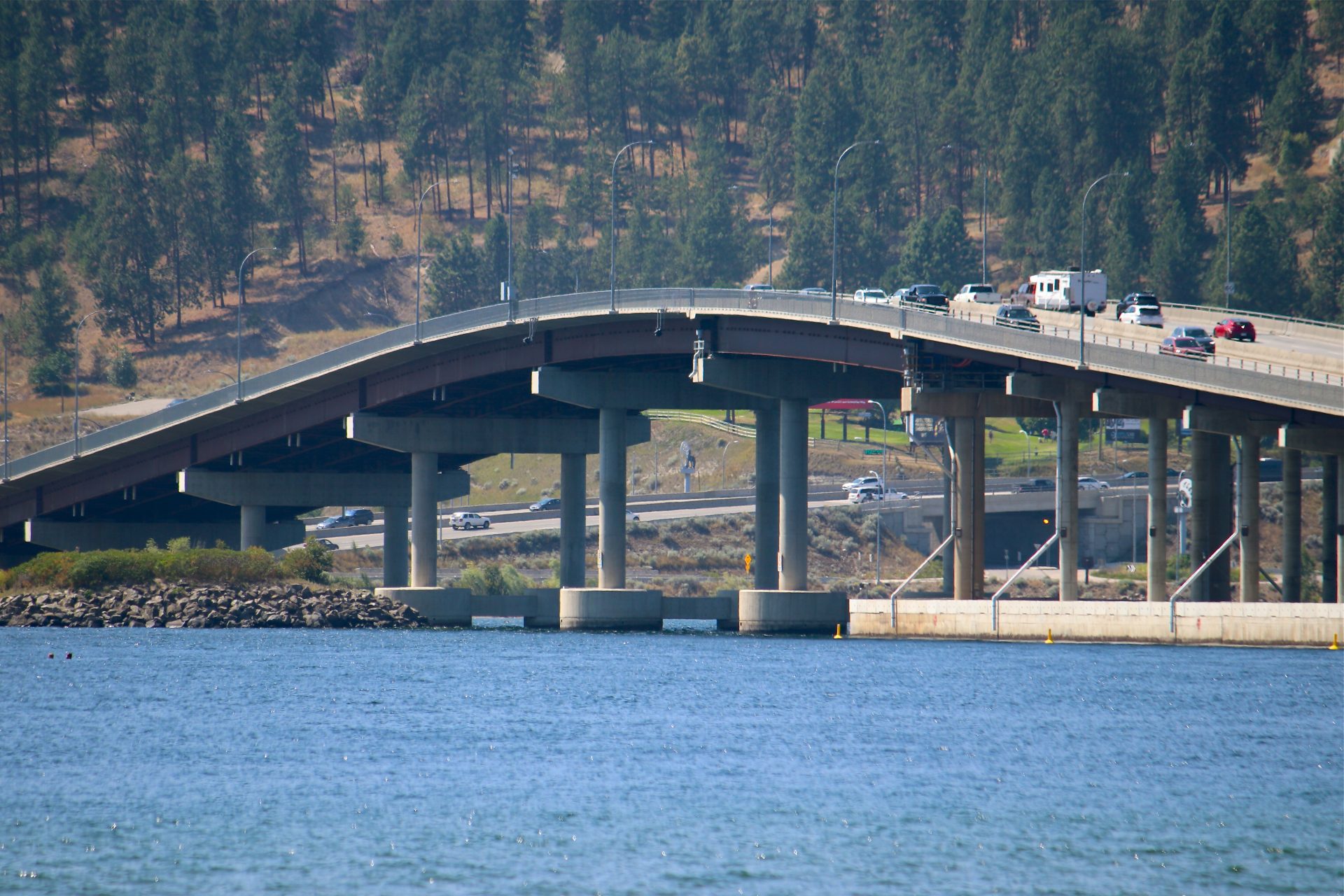