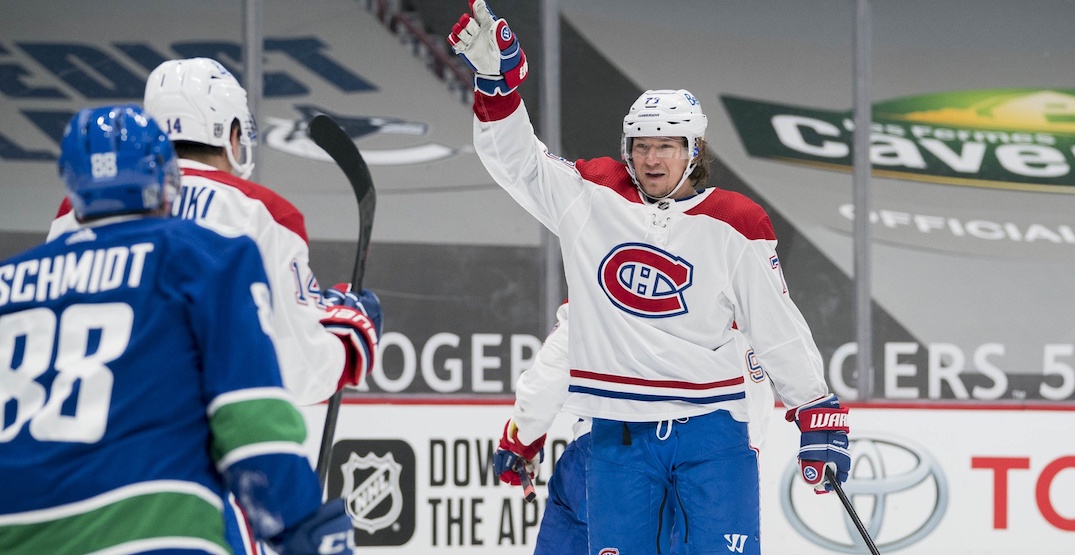 Tyler Toffoli hasn’t just scored revenge over his former team this season, he’s lit them up time after time.

Well, you get it.

It would be embarrassing for the Vancouver Canucks to let any one player score on them eight times in one season, never mind having it come in the span of two weeks. And for a former Canuck to do the damage? It has to sting.

And it has to sting extra hard because it didn’t need to be this way.

Jim Benning gave up a lot to get Toffoli last year, dealing prospect Tyler Madden and a second-round pick as part of the trade for the scoring winger. It was a “win now” move that paid off right away, with Toffoli scoring 10 points in 10 games with Vancouver before the pandemic halted the season.

He was hurt in the first game of the postseason, but he still managed to tally four points in seven games during the playoff series against the Vegas Golden Knights.

He fit like a glove, and then, he was gone.

A salary cap crunch meant that the Canucks had to make some difficult decisions this offseason. That included letting Jacob Markstrom and Chris Tanev walk in free agency.

But while both of those players signed long-term deals on the wrong side of age 30, the contract Toffoli signed with the Montreal Canadiens looked perfectly reasonable.

Nobody could have envisioned the pandemic and the flat cap that followed, but Toffoli’s contract was also cheaper than it would have been under normal circumstances because of it.

The Canucks needed to make room for Toffoli, but either didn’t or couldn’t, and that looks awfully foolish now. Toffoli has been even better for the Habs than he was for the Canucks, scoring nine goals and 13 points in his first 10 games.

His last goal against the Canucks was so impressive, stickhandling guru Pavel Barber had to break it down.

Breakdown of Toffoli goal …so much going on here. pic.twitter.com/fGhydoZHPC

While Toffoli was lighting up his former squad, one of the players the Canucks kept ahead of him was watching in the press box.

At $2.55 million, Jake Virtanen doesn’t make as much money as Toffoli, but he was a healthy scratch for the Canucks on Tuesday. Any illusions anyone had of Virtanen sliding into Toffoli’s spot in the top six is now gone, as the former first-round pick is having trouble even getting into the lineup.

And while a simple one-for-one swap wasn’t possible in the offseason, it could have been part of the process to keep Toffoli as a Canuck. The Canucks were either unable or unwilling to get creative this offseason, and perhaps the team wasn’t willing to flex its financial might during a pandemic. But retaining salary to move a bad contract surely was possible, as was exercising a buyout.

They could have also decided to go with a cheaper option than Braden Holtby, who was signed for $4.3 million.

The fact of the matter is the Canucks had a player they knew fit well with their group, and they let him slip through their hands because of years of cap mismanagement. Fans are probably sick of hearing of this by now, but it has to be brought up because of the sheer number of regrettable deals that are still haunting the team to this day.

Here’s a selection of over-inflated cap hits on the books at the moment:

And this doesn’t even include the Ryan Spooner buyout, which is still counting $1.033 million this season, or Micheal Ferland’s $3.5 million cap hit, which the team is getting relief on now because he is injured long term.

Every team has bad contracts, but not many teams have this many bad contracts — particularly when they’re looking to start their window of contention. Plain and simple, it’s hurting the team and many of them were completely avoidable.

And if you didn’t already know that by now, Toffoli provided a rude awakening.