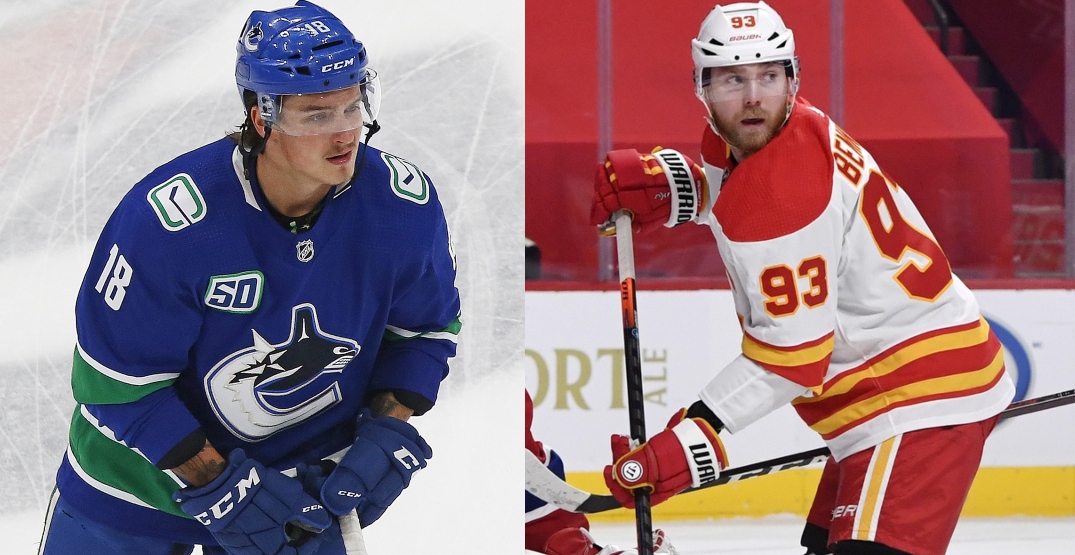 Sam Bennett wants out of Calgary, and the Canucks might just have the right piece to get a deal done.

It didn’t take too much imagination to put together a potential trade proposal from Canucks fans and media after Elliotte Friedman reported Bennett’s desire to leave the Flames on Hockey Night in Canada over the weekend.

“There was a rumour going around this morning that Bennett might want a change of scenery, and I did call his agent Darren Farris, who said yes that’s true. He would like it to be considered,” Friedman said during Hockey Night’s Saturday Headlines intermission segment. “[The Flames are] not in any hurry to do it. They like their depth down the middle, they’re not racing to make a move.”

This of course begs the question: Jake Virtanen for Sam Bennett, who says no?

Both 24 years old, Bennett (4th overall) was picked two spots ahead of Virtanen (6th) in the 2014 NHL Draft. Their career points-per-game averages are nearly identical, with Bennett (0.348) ranking slightly ahead of Virtanen (0.333). They have also fallen short of expectations since draft day, most regularly occupying spots on the third line of their respective teams.

They also have just one point each this season, with Virtanen currently sitting out as a healthy scratch.

NHL GMs are loathed to give up high draft picks, especially ones they picked themselves, but nearly seven years later, this could be “change of scenery” time for both players.

Each player’s contract carries the same $2.55 million cap hit, which would facilitate a trade, though Bennett’s deal expires after this season while Virtanen is under contract until the end of 2021-22.

Virtanen makes $1.7 million in salary this season, but is due $3.4 million next year, meaning it would take a $3.4 million AAV qualifying offer to retain him in 2022. That could put Virtanen on track to not be qualified if he underperforms, making him a UFA instead of an RFA, as the Canucks have done in recent years with Troy Stecher and Ben Hutton.

In Virtanen’s favour are the numbers he posted last season — 36 points (18-18-36) in 69 games, which is the identical stat-line that Bennett had in his rookie season in 2015-16. The analytics crowd will point to a bump in Virtanen’s shooting percentage — 12% last year, which was up from his 9.2% career average — as a sign that luck may have played a factor in some of his goals last season.

But while Virtanen’s numbers have been trending up, Bennett’s stats have gone the opposite way.

Bennett is coming off the worst season statistically of his NHL career, as he posted just 12 points (8-4-12) in 52 games. Prior to last season, Bennett scored between 26-27 points in three straight years.

But when it comes to each player’s playoff performances, it’s no contest.

Bennett has been a beast in the postseason throughout his career, starting when he burst onto the scene in the 2015 playoffs against the Canucks as an 18-year-old. Bennett has 19 points in 30 career playoff games, which includes five goals and eight points in 10 games last summer, which tied for the Flames team lead.

Virtanen, meanwhile, was a disappointment in the Edmonton bubble by the admission of GM Jim Benning. He wasn’t trusted by his coach to play in the first game of the postseason, and scored just three points (2-1-3) in the 16 playoff games that he did suit up for.

Who can you trust?

It’s that trust factor that should be the major reason for Benning to consider offering up Virtanen in a trade. Head coach Travis Green has made it clear through how he has deployed Virtanen, that he doesn’t have a high level of trust in his defensive play. That makes him an awkward fit on a checking line.

It was telling that Virtanen didn’t get much of a chance to play in the top six during training camp this year. With J.T. Miller out of the lineup for the first three games of the season, Virtanen got a shot with Elias Pettersson and Brock Boeser anyway, but he didn’t take advantage of it.

While Bennett has surely frustrated Flames fans also during his career, he does seem to provide more of what Green is looking for.

While Virtanen’s point production, at least until this season, has gone up every year, his physical play appears to be in decline. That’s a concern for a player that’s counted on to be a power forward.

Bennett steps up his physical play significantly in the postseason, averaging a whopping 21.17 hits per 60 last year, and 22.66 hits per 60 in 2019. Virtanen, meanwhile, had 11.98 hits per 60 in his only playoff appearance last season.

Also to be considered is Bennett’s versatility. While he’s been used primarily as a winger, Bennett is a natural centre — something the Canucks could be looking for next season, assuming they move on from Brandon Sutter. Having Bennett in the fold would provide insurance, if Adam Gaudette doesn’t turn into the reliable two-way centre they hope he will be.

In Virtanen’s favour is his blazing speed and his heavy shot, and the fact that he may just not jive with Green, who has been his coach since he spent a season in the AHL.