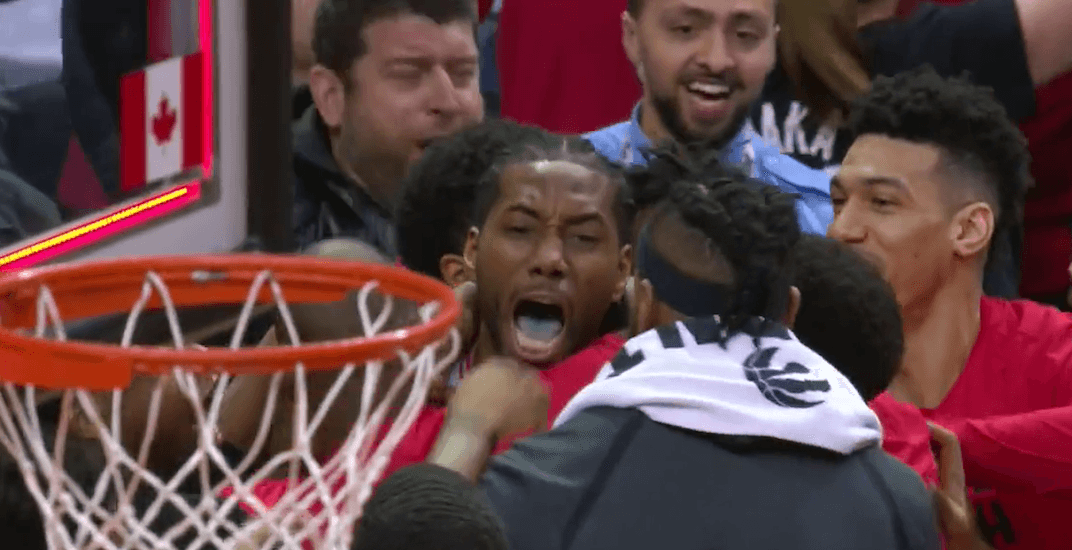 Kawhi Leonard is not human. With the Toronto Raptors’ season on the line, they gave the ball to their superstar and he delivered. Like any clutch performer, Leonard made a dramatic game-winning shot to send the Raptors to the Conference Finals.

No matter what happens from here on out, after making that bucket, “The Klaw” will go down as a Raptors legend. With 4.2 seconds left, Leonard called game and punctuated one of the greatest playoff performances in Raptors history, if not NBA history.

With this Game 7 victory over the 76ers, the Raptors exorcised their demons from 18 years ago when Philadelphia eliminated them in Game 7 of the Eastern Conference semi-finals.

With two seconds remaining in Game 7 of the 2001 series, Vince Carter took a shot from the arc. The ball bounced off the rim and Allen Iverson and the 76ers advanced. This time around, the Raps got their revenge with a 92-90 win in Game 7 over the 76ers.

18 years later, the ball finally landed, this time, from Leonard’s hand… and it was the dagger that ended the 76ers’ season.

The ball bounced around the rim four times before landing in the net, which sent everyone at Scotiabank Arena and surrounding area into a complete frenzy.

“I just shot it as high as I could, I got some loft on it, it made the ball bounce soft, and it ended up going in,” Leonard told TNT’s Rosalyn Gold-Onwude after the game. “I was disappointed missing that free throw (moments earlier), so I really wanted to make that shot.”

The Raptors will now face the Milwaukee Bucks in the Conference Finals beginning on Wednesday. Until then, Jurassic Park, the city of Toronto and all of Canada will celebrate this colossal victory by the Raptors.

Leonard was a monster with yet another herculean effort, scoring 41 points and shooting 41% from the floor. Chew on this for a moment; Leonard averaged 34.7 points per game in this series against the 76ers. With his 41 points in Game 7, Leonard now owns three of the top five best single-game scoring performances in Raptors playoff history.

Plays like these below underscored just how lethal Kawhi was for the Raptors in this series. Leonard straight-up picked Joel Embiid’s pocket with this steal and faked Tobias Harris en route to a monster dunk.

Despite suffering a sprained thumb in the second quarter, Kyle Lowry returned and drained this clutch three-pointer near the end of the first half. Lowry, a Philadelphia native, showed anything but brotherly love for his hometown team.

The man is no stranger to Game 7’s, as Lowry played in his fifth career win-or-go-home game in the playoffs. Lowry provided 10 points and 6 rebounds, shooting 30.8%. More importantly, he came up with a few key turnovers that allowed Leonard to make some crucial baskets.

Of all players, it was Serge Ibaka who came alive in Game 7, drilling a trio of threes and contributing 17 points for Toronto. He scored the second-most points by any Raptors player in the game.

The Conference Finals kick off Wednesday in Milwaukee, which will be a matchup of the number one and two seeded teams at the end of the regular season. It will be best-on-best from the East between the Buck and Raps.

Heading into the Eastern Finals, the Bucks won the season series over the Raptors, taking three of four regular-season games.