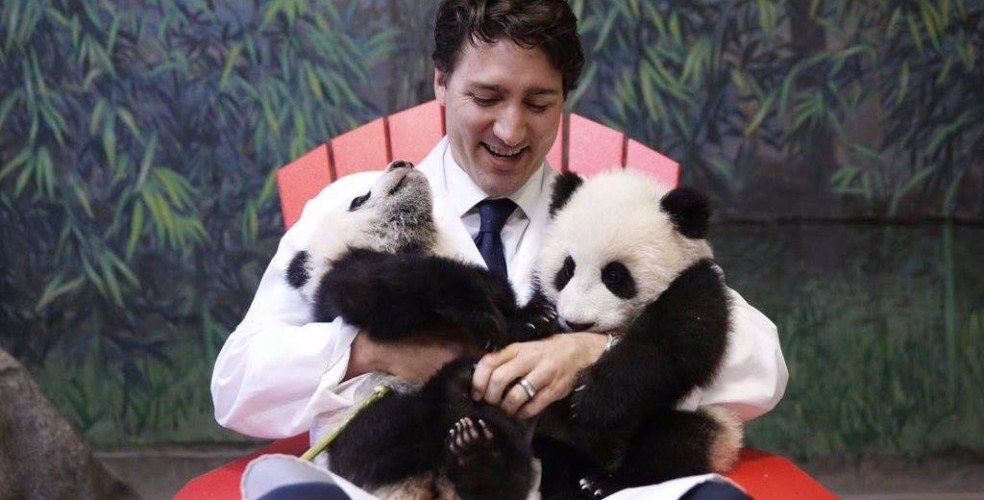 Exactly one year ago, Justin Trudeau was elected as Canada’s new prime minister. With his dashing smile and promise of “sunny ways” ahead, many Canadians felt he was the change the country needed.

Trudeau has also managed to capture the attention of media across the world. Whether he posed with cute pandas or did some one-handed pushups, the prime minister certainly has a way of making headlines.

Here are 10 of Trudeau’s most memorable media moments since being elected last October.

In November 2015, Trudeau announced his gender-balanced Cabinet and told us why he chose to do so in this pretty epic speech that made many Canadians feel he was off to a good start.

2. Made his Vogue debut

There is no doubt that Trudeau and his wife, Sophie Grégoire-Trudeau, make a beautiful couple and their December photo spread in Vogue magazine certainly proved that point. Trudeau also made it to Vogue’s 2015 list of Sexiest Men Alive. “Sexy, feminist, and capable of balancing a baby on one hand: Prime Minister Trudeau gets our vote,” said Vogue, in their ‘sexiest men’ profile of our nation’s leader.

3. Took a picture with some baby pandas

Trudeau cuddled up with the Toronto Zoo’s panda cubs, making for an adorable photo-op.

4. Announced he was a feminist

In March 2016, Justin Trudeau declared he was a feminist at a women’s conference on gender equality at the United Nations headquarters in New York. “I’m going to keep saying, loud and clearly, that I am a feminist. Until it is met with a shrug,” he said. “It shouldn’t be something that creates a reaction. It’s simply saying that I believe in the equality of men and women and that we still have an awful lot of work to do to get there. That’s like saying the sky is blue and the grass is green.”

In April 2016, the prime minister visited the Perimeter Institute for Theoretical Physics in Waterloo, Ontario. One reporter seemed to doubt Trudeau’s knowledge about quantum computing, but the prime minister gave him a quick lesson *cue the mic drop.*

6. Did one-armed pushups with members of Team Canada

Dear @POTUS, @FLOTUS and @KensingtonRoyal – did someone say “bring it?” Canada’s ready for @InvictusOrlando.https://t.co/TxBAMPvTYs

In May 2016, Trudeau met with England’s Prince Harry to discuss the 2017 Invictus Games, which will be held in Toronto next year. Trudeau decided to show off Team Canada’s (and his own) skills to the world by dropping to the ground for a couple of one-handed push-ups.

7. Showed he was the king of awkward handshakes

Trudeau’s awkward handshake with US President Barack Obama and Mexican President Enrique Peña Nieto during the North American Leaders’ Summit in Ottawa made us all cringe.

In May 2016, Trudeau faced criticism after he was accused of “manhandling” Conservative whip Gord Brown and NDP MP Ruth Ellen Brosseau in the House of Commons when MPs gathered to vote on the assisted-dying bill. Brosseau said she was so upset by the prime minister’s actions that she had to leave the chamber. “What kind of man elbows a woman? It’s pathetic! You’re pathetic!” said former NDP party leader Tom Mulcair in a response to Trudeau’s “elbow-gate” moment.

9. Marched in Pride parades across the country

Trudeau marched in the Vancouver, Toronto and Montreal Pride parades making him the first Canadian prime minister to ever do so.

In August, Trudeau was spotted shirtless (and looking quite toned) on a public beach in Tofino, BC. Wedding photographer Marnie Recher caught the prime minister on camera, as she was taking pictures of a couple’s wedding on the beach.