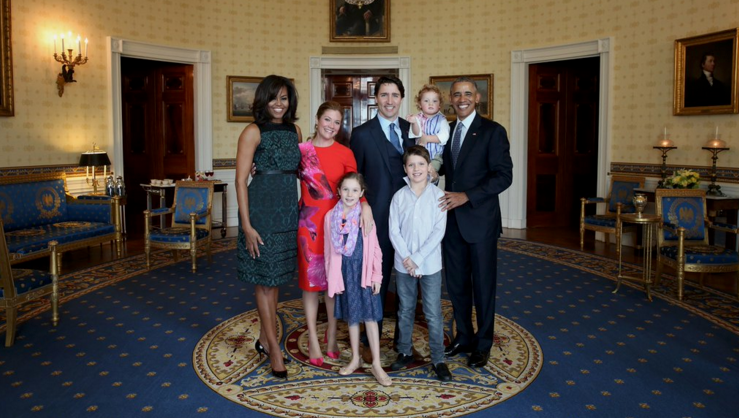 The meeting made history – Trudeau is the first standing prime minister to make an official White House visit in nearly two decades.

“Today we are very proud to welcome the first visit of a Canadian prime minister in nearly 20 years. It’s about time, eh?” President Obama joked to the crowd.

The pair say they plan to sign the Paris agreement as soon as possible while committing to completing low greenhouse gas emission development strategies in 2016. They also discussed the Montreal Protocol and the growing concern over the rapidly changing Arctic, as well as possible solutions.

Plus, they kissed some babies and the Weeknd was there for some reason.

Here are 12 photos of Trudeau meeting Obama in Washington, D.C.

#ObamaAndKids + @JustinPJTrudeau at the State Arrival Ceremony this morning at the White House. #CanadaVisit ????????

thank you for inviting me to this historical evening. an honor to witness this moment my friend and Prime Minister @justinpjtrudeau

Great to be in Washington, DC! Looking forward to meeting with @POTUS & strengthening ties between our countries. pic.twitter.com/TKMFssW1r6

Great meeting with @POTUS today at the @WhiteHouse as we work to strengthen ties between our countries. #PMDC pic.twitter.com/2XNw1lbSSP — CanadianPM (@CanadianPM) March 10, 2016

There is no relationship in the entire world quite like the Canada-US relationship. #PMDC @POTUS pic.twitter.com/dIXvphGw3F

#whitehouse #canada #canadavisit #justintrudeau A video posted by Darlene (@cocobravamag) on Mar 10, 2016 at 9:42am PST

Sophie Grégoire-Trudeau wears this vibrant red @lucianmatis dress at The White House this morning. Read more about her fashion by clicking the link in our bio! #etalk #justintrudeau #sophiegregoire #sophiegregoiretrudeau #CanadianFashion A photo posted by etalk (@etalkctv) on Mar 10, 2016 at 8:32am PST