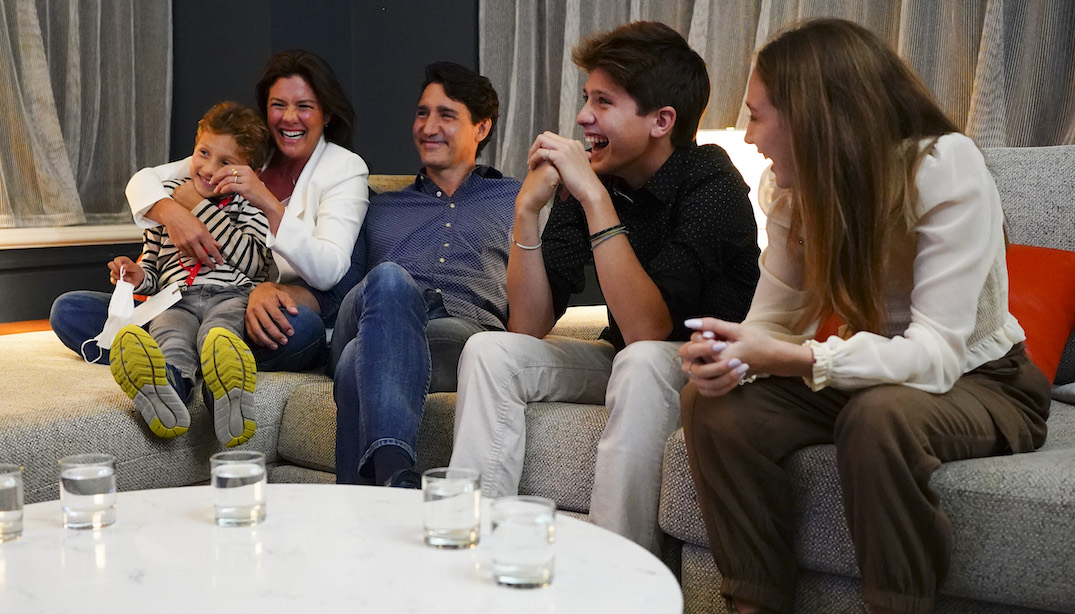 Canadians have chosen another minority Liberal government – almost identical to the one it replaced – to finish the fight against COVID-19 and rebuild the shattered economy.

Thank you, Canada — for casting your vote, for putting your trust in the Liberal team, for choosing a brighter future. We’re going to finish the fight against COVID. And we’re going to move Canada forward. For everyone.

In a speech, Prime Minister Justin Trudeau says there is more unity than division in the country to tackle some major policy issues.

He argues that he has a clear mandate to get through the pandemic and rebuild from COVID-19.

However, he concedes that people don’t want to worry about being plunged into another election, but instead for MPs to work together.

The prime minister will have to rely on enough opposition support to get his agenda through the legislative process.

Speaking to supporters in Montreal, Trudeau highlighted some big promises from his government, including child care and housing affordability.

There are also almost 800,000 mail-in ballots to be counted, starting Tuesday, which could yet change the preliminary results in many of those tightly contested seats.

The party’s share of the vote in the two most populous provinces, Ontario and Quebec, was well ahead of what polls heading into the election had forecast.

The Grits were hanging onto their commanding position in Atlantic Canada, where the Conservatives made modest gains.

The NDP lost its lone Atlantic seat, St. John’s East, to the Liberals. It had been held by New Democrat Jack Harris, who did not seek re-election.

Trudeau cabinet ministers Chrystia Freeland, Seamus O’Regan, Dominic LeBlanc and Lawrence MacAulay are among those who cruised to victory.

But Bernadette Jordan, who served as fisheries minister, lost to her Conservative rival in Nova Scotia’s South Shore-St. Margarets, evidently hurt by the lobster fishery dispute between Indigenous and non-Indigenous fishers in the region.

In Fredericton, N.B., Jenica Atwin, the former Green MP who defected to the Liberals last spring, was in a tight, see-saw battle with the Conservatives.

Heading into Monday night, polls suggested a dead heat across Canada between the Liberals and Conservatives _ neither of them within reach of the 170 seats needed to form a majority government.

Trudeau pulled the plug on his minority Liberal government on Aug. 15, a little less than two years after Canadians first reduced the Liberals to a minority.

He argued that Canada was at a pivotal moment in history and Canadians deserved a chance to decide how they wanted to finish the fight against COVID-19 and build back the shattered economy.

But the timing of his election call, coming as a fourth wave of the novel coronavirus was beginning to sweep the country, quickly sapped the good will Trudeau had built among Canadians for his government’s handling of the pandemic over the previous 18 months.

And it gave rival leaders an opening to attack Trudeau’s character, describing him as a selfish egoist who can’t be trusted to put the interests of Canadians ahead of his personal ambition to secure a majority.

At dissolution, the Liberals had 155 seats, the Conservatives 119, the Bloc Quebecois 32, the NDP 24 and the Greens two. There were also five independents and one vacancy.

While another minority seemed likely, it was a toss-up heading into Monday night whether it would be a Liberal or Conservative minority.

Which of the two front-runners ultimately forms government doesn’t necessarily depend on who wins the greatest share of the popular vote or even who wins the most seats.

Rather, it depends on which party can muster enough support from one or more smaller parties to survive crucial confidence votes in the House of Commons.

Canadians may well have to wait until Wednesday to learn which party will form the government.

There are almost one million mail-in ballots that election officials won’t start counting until Tuesday. Elections Canada has said it expects to finish the mail-in count in most ridings by Wednesday, but some may take another day or two.

According to Elections Canada, almost 6.8 million people voted early, most of them at advance polls over a week ago, and the rest through special ballots cast by mail or at Elections Canada offices.

Elections Canada had previously warned that the pandemic could lead to longer waits for voters compared to past elections. Public health protocols involve keeping people at a distance and collecting extra information for contact tracing purposes, which could take extra time.

The polling stations themselves were also likely to be farther away, as many schools and landlords opted out of hosting crowds of voters during the fourth wave of the pandemic.

Elections Canada encouraged voters to wear masks but only required them in places where they were mandated by provincial rules. Proof-of-vaccination regulations do not apply at polling stations in any province where they currently exist.

George Walker cast his ballot in Toronto Monday afternoon. He described the experience as “smooth,” and he called the safety precautions taken at the polling station “wise.”

“But it took longer than it has in the past, mainly because of COVID,” Walker said, adding he didn’t mind the extra 15-minute wait.

“I felt like it was very well-organized,” Fernandez added. “No complaints at all.”