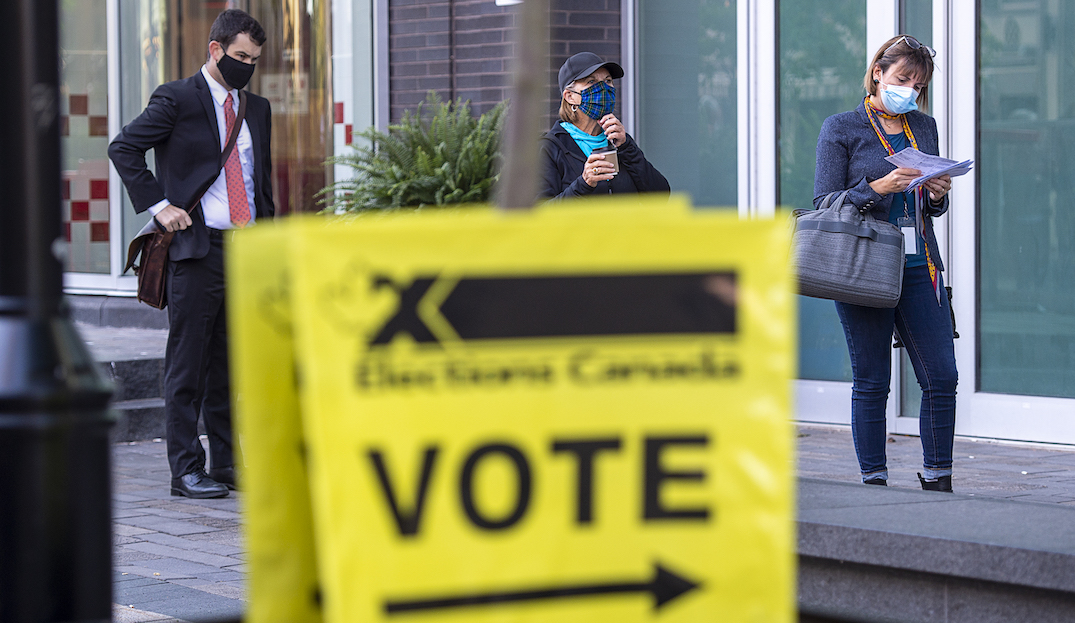 Elections Canada is reporting a handful of disruptions at polling stations across the country, including an Indigenous-led protest and poll workers not showing up, as millions of Canadians cast their ballots in the country’s first pandemic election.

While the majority of polling stations opened on time and without incident, Elections Canada spokeswoman Diane Benson says issues have been reported with several sites in Ontario and Western Canada, resulting in some stations opening late or having to be relocated.

Those include a polling station in the riding of Brantford-Brant, southwest of Toronto, which had to be moved following a protest organized by the Haudenosaunee Confederacy Chiefs Council.

The council spoke out last week against putting a polling station on what it considers its traditional territory, calling it a treaty violation and encouraging members not to vote.

The local newspaper Turtle Island News reports that protesters blocked all three entrances to the polling station before a standoff broke out with Six Nation police.

The newspaper said the polling station was moved off reserve following negotiations between the two sides.

“We are aware that the Haudenosaunee Confederacy Chiefs Council protest disrupted the vote at a polling place in Brantford-Brant before the polling place could be relocated,” Benson said in an email.

Benson also reported that poll workers did not show up for two polls in the Ontario riding of Kenora, near the border with Manitoba. Standby workers from other parts of the region were on their way, she said, with the polls expected to open by mid-afternoon.

Two polling locations in First Nations in the Alberta riding of Grand Prairie-Mackenzie were also late opening due to staff being unable to get into locked buildings. The polls have since opened.

Elections Canada was also aware that a polling location in the BC community of Yekooche, in the riding of Skeena-Bulkley Valley, had not opened.

Benson also reported special arrangements had been made, with the approval of local campaigns, for several polling places in the Toronto ridings of Eglinton-Lawrence and University-Rosedale to manage the flow of voters while respecting safety measures in place.

“We are aware of a disruption in voting services in several polling places in Davenport,” she added. “Voting has resumed.”

The isolated disruptions came as Canada’s major party leaders joined the millions of residents who’ve cast their ballots in the country’s first pandemic election, which culminates today as Canadians from coast to coast go to the polls.

Elections Canada says almost 6.8 million people voted early, most of them at advance polls over a week ago, and the rest through special ballots cast by mail or at Elections Canada offices.

Conservative Leader Erin O’Toole and his wife Rebecca arrived Monday morning at a voting station in Bowmanville, Ontario, in his riding of Durham, to cast their votes.

Rebecca O’Toole told a poll worker the couple wore the same blue outfits they sported at the launch of the campaign.

“I wonder who he’s voting for,” she joked as her husband marked his ballot before the two dropped their votes into the ballot box.

Liberal Leader Justin Trudeau cast his ballot in his riding of Papineau, Quebec, with his three children at his side. His wife Sophie Gregoire Trudeau, who already voted, waited by the entrance of the polling station.

Trudeau’s youngest son, Hadrien, seven, held his father’s hand and accompanied him to the voting booth before the two pushed the ballot into the box together.

Other leaders voted ahead of election day, including NDP Leader Jagmeet Singh, who cast his ballot in an advance poll in his riding in Burnaby, BC, earlier this month.

Singh on Monday stopped by the party’s campaign office there, which was decorated in orange signs, pictures of their leader and yellow sunflowers, to thank volunteers with his pregnant wife, Gurkiran Kaur Sidhu, who has been a staple throughout his campaign.

Asked how they were holding up, the couple told volunteers they were optimistic and full of energy.

“This is democracy. People send to the Parliament the people they believe will represent them the best,” Blanchet said Monday. “Whatever Canada wants as the ballot question, it’s their business. But I believe Quebec has a right to be different.”

The majority of Canada’s more than 30 million eligible voters will mark their ballots today.

Elections Canada told The Canadian Press it had intermittent issues with a search tool on its website that lets voters know which polling station to go to based on their postal code. The agency urged electors to check their voting cards or call Elections Canada directly if they weren’t sure where to go.

Benson said Elections Canada was also investigating high call volumes in certain electoral districts, though she did not say which ridings were affected.

Elections Canada had previously warned that the pandemic could lead to longer waits for voters compared to past elections.

The polling stations themselves are also likely to be farther away, as many schools and landlords opted out of hosting crowds of voters during the fourth wave of the pandemic. That means fewer places to vote and potentially longer lines.

Elections Canada encouraged voters to wear masks but only required them in places where they were mandated by provincial rules. Proof-of-vaccination regulations do not apply at polling stations in any province where they currently exist.

Police in Edmonton said they responded to one disruption at a polling station where a man and woman refused to wear a mask inside a local public school as they tried to vote. Police said the man allegedly had a medical exemption and co-operated when asked to leave.

An Elections Canada spokesperson said some polls had seen isolated delays in getting set up, which created some longer waits, but nothing unusual compared to years past.

George Walker cast his ballot in Toronto Monday afternoon. He described the experience as “smooth,” and called the safety precautions taken at the polling station “wise.”

“But it took longer than it has in the past, mainly because of COVID,” Walker said, adding he didn’t mind the extra 15-minute wait.

“I felt like it was very well organized,” Fernandez added. “No complaints at all.”

Polling stations are open for 12 hours, but the opening times vary by region, starting as early as 7 am PST in British Columbia and as late as 9:30 am EDT in Ontario and most of Quebec.

Most riding winners will be known by the end of the evening, but Elections Canada has warned it could take up to four days to finish counting all special ballots, meaning some close races may not have official winners for several days.