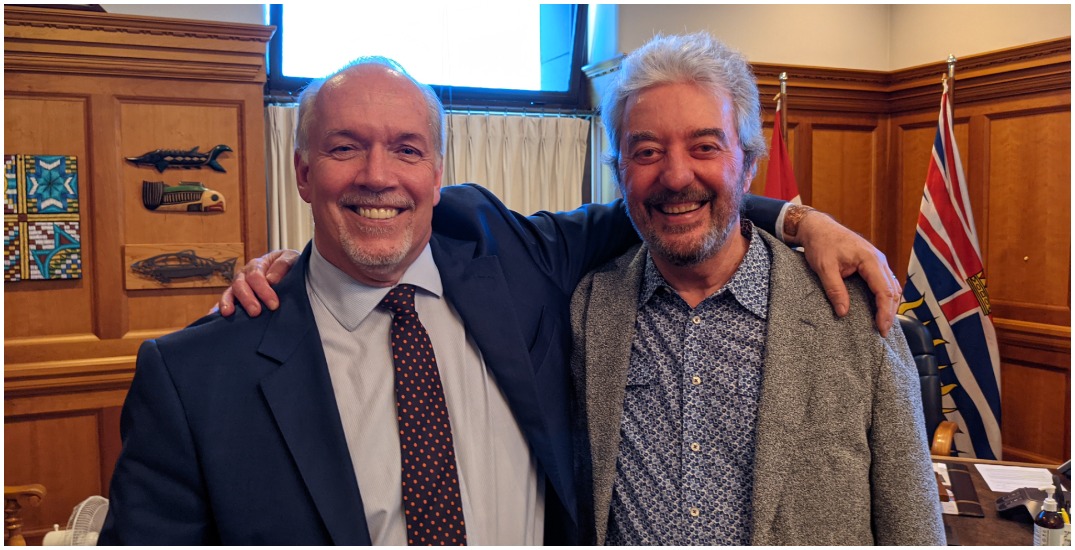 Premier John Horgan is currently at the absolute peak of his political career, with sky-high public approval ratings and a recent election victory in which he crushed his political opponents.

Much of that success can be traced back to one man in particular, whom you’ve probably never heard of, but whose quiet retirement a few weeks ago left a major void in the world of BC politics.

It’s hard to overstate his importance.

Put simply: Without Dewar, there’d quite likely be no Premier Horgan. Just ask the premier himself.

“I don’t think we would have had the success we’ve had without Bob, without a doubt,” Horgan told Daily Hive.

Metro Vancouver voters who were suddenly lured to the NDP in the past two elections felt the reach of Dewar without knowing who he was – the focus on “affordability,” childcare and housing were key decisions by Dewar as the campaign boss, and the wildly popular promise to eliminate Lower Mainland bridge tolls in the 2017 election was entirely his handiwork.

But to truly understand the story of Horgan and Dewar, you have to go back to 2016 and to one of the most important phone calls Horgan ever made.

Back then, Horgan was regretting his choice to become leader of the BC NDP in opposition.

He’d tried to duck out of the race a few years earlier, but literally nobody else wanted the job. He was dragged back, only to find himself miserable in opposition, fighting with reporters and being openly mocked as “Hulk Horgan” by then Premier Christy Clark and her BC Liberals.

Few pegged him as a premier-in-waiting.

Trusted ally Marie Della Mattia suggested Horgan introduce himself to a lanky, grey-haired strategist from Manitoba by the name of Bob Dewar. He might be able to turn things around, she suggested.

Horgan hesitated. He didn’t know Dewar. He thought the 64-year-old strategist, with decades of experience federally and in other provinces, was too old to be useful in a modern election campaign. He procrastinated and dithered for months before finally picking up the phone.

“I’m so grateful that I made that call,” Horgan says now.

Horgan, the mercurial Irishman, and Dewar, the wry strategist with an infectious laugh, hit it off.

“He’s a super guy,” said Horgan. “Bob’s just an affable guy that understands people. And that’s what politics is at the end of the day – it’s not strategy, it’s relationships and people. Exactly. And Bob’s just an expert at that.”

One major key to Dewar’s success in BC politics was that he’s from Manitoba and had little experience working out west.

As illogical as that might sound, being an outsider from another province allowed Dewar to parachute into the BC NDP in 2016 with a clean slate – he owed no one any favours, had no loyalties to speak of other than to Horgan, and could call his shots as the election campaign director based entirely on what he thought would win the party votes.

Dewar quickly zeroed in on the cost pressures hammering Metro Vancouver voters, which continues to be the central theme of the Horgan government and the source of its growing power base in the Lower Mainland.

“I had no baggage with anybody – I would ask anybody anything,” Dewar told Daily Hive in an interview. “Coming in, I had one goal in mind and that was to make him premier.”

The NDP under Dewar stunned the Liberals with a near-tie in the 2017 election. Horgan quickly tasked Dewar with convincing BC Green leader Andrew Weaver to partner with the NDP to bring the Liberals down. Again, Dewar found the path to success.

When Horgan became premier, Dewar became his “special advisor.” He kept the Greens happy, the premier focused on the right political files and the NDP sharp for the next election campaign.

Dewar was at the helm again in September, when Horgan launched a snap election during the pandemic, to take advantage of the Greens and Liberals at their weakest moment.

The result was an orange wave of support for the NDP that swept through the Lower Mainland and gave Horgan a super majority in the legislature.

Dewar decided that would be his swan song.

Now 69 years old, he ended his contract as Horgan’s special advisor in June and moved back to Manitoba, where his family was waiting.

“I really do believe you should not be there forever,” he said of senior strategists like himself. “You have to have people move around to keep those juices flowing.”

So ends a brief but extraordinary partnership between Horgan and Dewar, two guys who didn’t know each other at all in 2016 but who the history books will record as having dominated BC politics for almost five years.

“Both of us influenced each other and went on this journey together where at the beginning we didn’t know where we were going,” said Dewar. “We got pretty close. I consider him a friend.”

Together, they helped lead the NDP to dominance in Metro Vancouver in 2017, topple the BC Liberals from power, ink a historic power-sharing deal with the BC Greens, hold together one of the longest minority governments in history, govern during the greatest health crisis of our time, and turn a minority government into a super majority in a snap election.

“It’s very unique. Most people don’t go through that in their political lives,” said Dewar. “Some of it’s being the right person in the right place at the right time. It just happens…

“When you think about it in those terms it does sound pretty remarkable. But when you are doing it day to day, it was just a day in the life. I think it was a privilege. Not many people get the opportunity to do all this. And I really enjoyed doing it. Now it’s time to move on.”