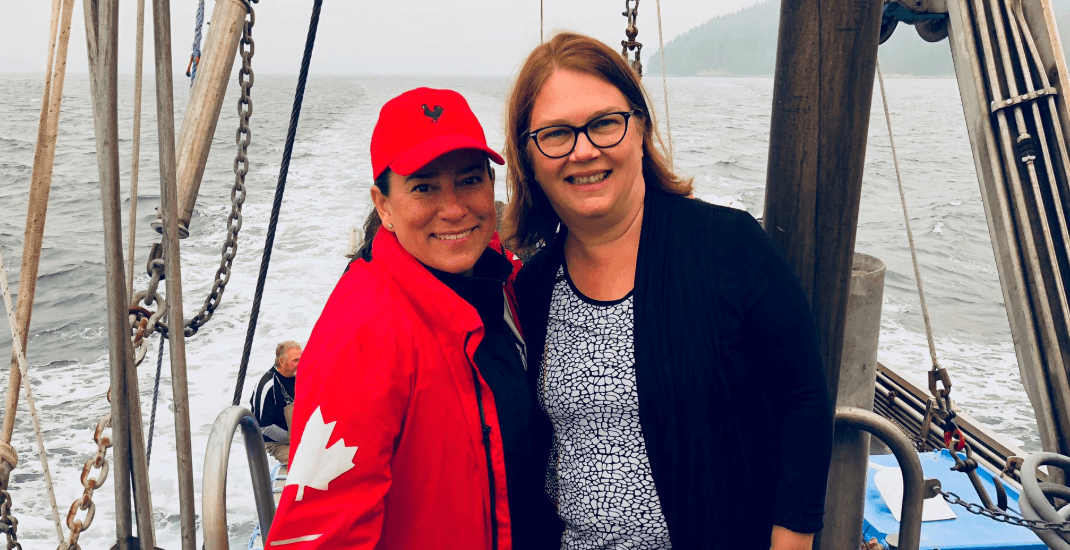 Prime Minister Justin Trudeau says the decision to toss Jody Wilson-Raybould and Jane Philpott from the Liberal caucus was made because the trust between them — and the party — was broken.

“I am here to announce that Jody Wilson-Raybould and Jane Philpott are no longer members of the Liberal caucus,” Trudeau told media at a press conference following the decision, and emergency national Liberal caucus meeting Tuesday afternoon.

“The trust that previously existed between these two individuals and our team has been broken,” he continued.

“If they can’t honestly say they don’t have confidence in this team… then they cannot be part of this team.”

Wilson-Raybould and Dr. Philpott will no longer be Liberal MPs.

Wilson-Raybould made the announcement on Twitter, saying: “I have just been informed by the Prime Minister of Canada that I am removed from the Liberal caucus and as the confirmed Vancouver Granville candidate for the Liberal Party of Canada in the 2019 federal election.”

I have just been informed by the Prime Minister of Canada that I am removed from the Liberal caucus and as the confirmed Vancouver Granville candidate for the Liberal Party of Canada in the 2019 federal election. More to come…

The news comes after Wilson-Raybould and Jane Philpott both announced they were resigning from Justin Trudeau’s cabinet.

Their resignations were regarding the SNC-Lavalin case and whether Wilson-Raybould –the former attorney general — was pressured to drop a criminal prosecution against the multi-billion dollar Quebec engineering firm.

An investigation into the matter was launched in February after Canada’s Conflict of Interest and Ethics Commissioner, Mario Dion, agreed to the investigation request from the federal NDP.

Wilson-Raybould resigned from cabinet several days after allegations against the Prime Minister’s Office (PMO) emerged and little more than a month after she was shuffled from the justice office to veterans affairs. She remains a Liberal MP in the Vancouver-Granville riding. She also testified in the SNC hearings.

Philpott, former president of the Treasury Board and minister of digital government, announced her resignation from cabinet in March. She also remained as an MP in the Liberal caucus.

“I have been considering the events that have shaken the federal government in recent weeks and after serious reflection, I have concluded that I must resign as a member of Cabinet,” Philpott said in her letter to Trudeau, specifically pointing to the way the government has handled the SNC-Lavalin case.

Philpott was first elected as MP in 2015 in the Ontario riding of Markham-Stouffville. Prior to being named Treasury Board President in January 2019, she held Cabinet positions as Health Minister and Indigenous Services Minister.

Today, Wilson-Raybould penned a letter to the Liberal caucus regarding the SNC-Lavalin controversy.

Here is Jody Wilson-Raybould’s letter to her Liberal colleagues:
“Ultimately the choice that is before you is about what kind of party you want to be a part of, what values it will uphold, the vision that animates it, and indeed the type of people it will attract.” #cdnpoli pic.twitter.com/eWp4c5aEod

Both Wilson-Raybould and Philpott released statements regarding the Liberal caucus’ decision.

On Twitter, Wilson-Raybould said her “thoughts are [with her] constituents” in the Vancouver-Granville riding as well as her volunteers, family, friends, and “all Canadians who believed in a new way of doing politics.”

“What I can say is that I hold my head high [and] that I can look myself in the mirror knowing I did what I was required to do and what needed to be done based on principles [and] values that must always transcend party. I have no regrets. I spoke the truth as I will continue to do,” she said.

Reflecting on what PM has done, my thoughts are w/ my constituents in #VanGran, my dedicated staff & volunteers, my family & friends & all Canadians who believed in a new way of doing politics. I will take the time to reflect & talk to my supporters about what happens next. (1/2)

What I can say is that I hold my head high & that I can look myself in the mirror knowing I did what I was required to do and what needed to be done based on principles & values that must always transcend party. I have no regrets. I spoke the truth as I will continue to do. (2/2)

On Facebook, Philpott said that being ousted from caucus is “profoundly disheartening.”
Read her full statement below:

Tonight I was expelled from the caucus of the Liberal Party of Canada. Sadly the decision was made without me being provided any opportunity to speak to national caucus. This is profoundly disheartening for me, my staff and my family – and I know people in Markham-Stouffville will also be disappointed.

I was accused publicly by people in caucus of not being loyal, of trying to bring down the Prime Minister, of being politically motivated, and of being motivated by my friendship with Jody Wilson-Raybould. These accusations were coupled with public suggestions that I should be forced out of caucus.

These attacks were based on inaccuracies and falsehoods. I did not initiate the crisis now facing the party or the Prime Minister. Nor did Jody Wilson-Raybould.

I was not able to support the recommended response to deny these allegations. My constitutional obligations including Cabinet solidarity and collective responsibility compelled me to resign as a Cabinet member under these circumstances.

This isn’t about a lack of loyalty. On the contrary, I recommended that the government acknowledge what happened in order to move forward. This was an expression of loyalty, not disloyalty — in the same way that Jody Wilson-Raybould attempted to protect the Prime Minister from the obvious short-term and long-term consequences of attempts to interfere with prosecutorial independence — but to no avail.

This also isn’t about political advantage or strategy. It is frankly absurd to suggest that I would leave one of the most senior portfolios in government for personal advancement or merely out of friendship with Jody Wilson-Raybould.

I have also been criticized for not telling my complete story in Parliament because I would be shielded by Parliamentary immunity. Much of the story has now been told by Jody Wilson-Raybould as a result of the additional information she provided to the Justice Committee. Anything else is covered by Cabinet privilege that has not been waived. It would be irresponsible for me to breach Cabinet privilege simply because I could do so without being prosecuted for the breach. Parliamentary privilege is not designed as a licence for breaching your constitutional and ethical obligations.

Throughout these events, I have continued to support Liberal policies and the commitments we made. As a member of Cabinet, I would have been compelled to support in Question Period and in the media the government’s response to the SNC-Lavalin case and speak in support of that response. I could not do this and as a result, I was compelled to resign. I thought there should be scope within the caucus and the party for a range of views on the SNC-Lavalin case including the views I expressed directly to the Prime Minister. Indeed, the need has never been greater for a measured re-evaluation of how the government should respond to this issue. What I have heard from Canadians is that they want to know the truth.

That being said, it appears that the caucus is intent on staying the current course, regardless of its short-term and long-term consequences to the party and to the country, and it has been decided that there is no place for me in the caucus.

I regret that relationships have been so fractured. I have nothing but good wishes for my former Liberal colleagues and all those who commit themselves to public service.

I ran to be a Member of Parliament for the purpose of improving people’s lives. Nothing will stop me from continuing in that pursuit. I will continue to proudly represent the people of Markham-Stouffville for the remainder of this term.