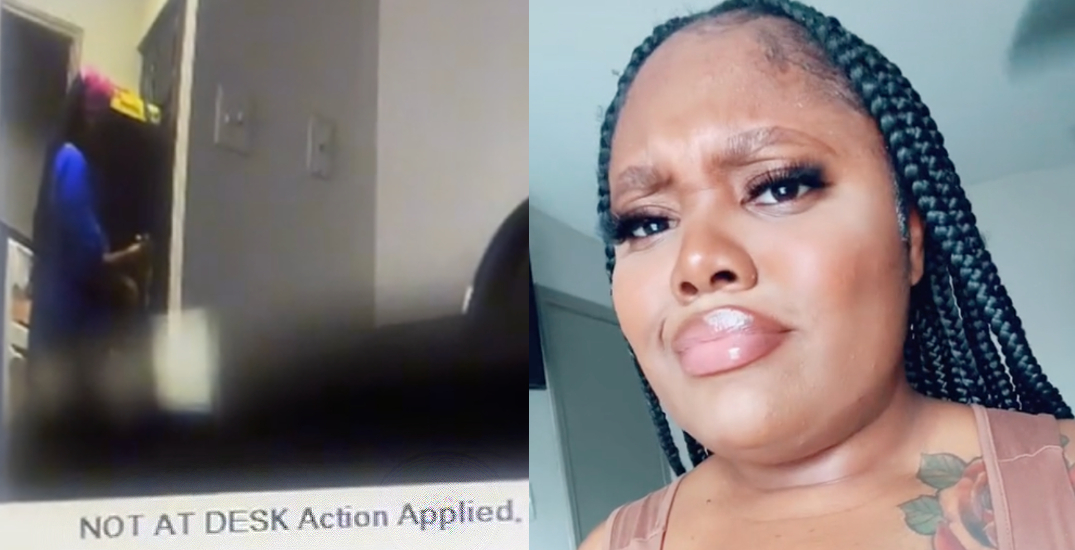 A woman has shared her harrowing remote job experience in a series of TikTok videos that show how her employer monitors workers using their webcam.

The video shows a screenshot of her webcam footage with a note from the employer that reads, “NOT AT DESK. Action applied. Please get approval from supervisor to retry.”

Johnson, who goes by Michae Jay on TikTok, works for a customer service agency, and fintech company Klarna is one of their clients.

After receiving several comments telling her she should have covered her webcam, the Dallas resident revealed she wasn’t allowed to do so under her employer’s policies.

“Okay, y’all, so unfortunately, I’m not allowed to cover my camera. If it were up to me, I would not even have my camera plugged in,” she said in a follow-up video. “The webcam is to take pictures of you throughout the day.”

She added that the system takes photos if you’re not at your desk, or if someone else is spotted in your background, or if you’re seen using your mobile phone. You must lock your screen if you’re taking a bathroom or lunch break.

“Unfortunately, I got off my desk and I forgot to lock my screen, and it took a picture of me. It literally took me, like, 45 minutes to get back in,” Johnson said, requesting her followers to help her find another WFH job.

“By the way, I’m in Texas. If you know another work-from-home job, please DM me or post it in the comments because I’m sick of it. Literally, sick of it.”

She also clarified that covering the camera would result in her being written up at work.

After a bunch of further videos, where she answered questions from commenters and shared a conversation she had with an unidentified manager, Johnson’s employer took notice and she was told she was fired because of her TikTok posts.

Johnson requested a copy of their employee handbook in response.

Minutes later, she received an invite to a video meeting, where HR told her she was not fired but suspended indefinitely, and that a thorough investigation of the TikTok videos would determine whether or not she could keep her job.

“There’s probably no social media clause in that handbook,” pointed out a commenter, one of many who advised that it could help her with legal recourse in determining if her firing or suspension was fair.

Johnson also revealed that her job pays by the hour, but the rate varies given how many hours you put in per week. She alleges that though she was paid US$17/hour for 40 hours a week, those working fewer hours weekly made as low as US$14/hour.