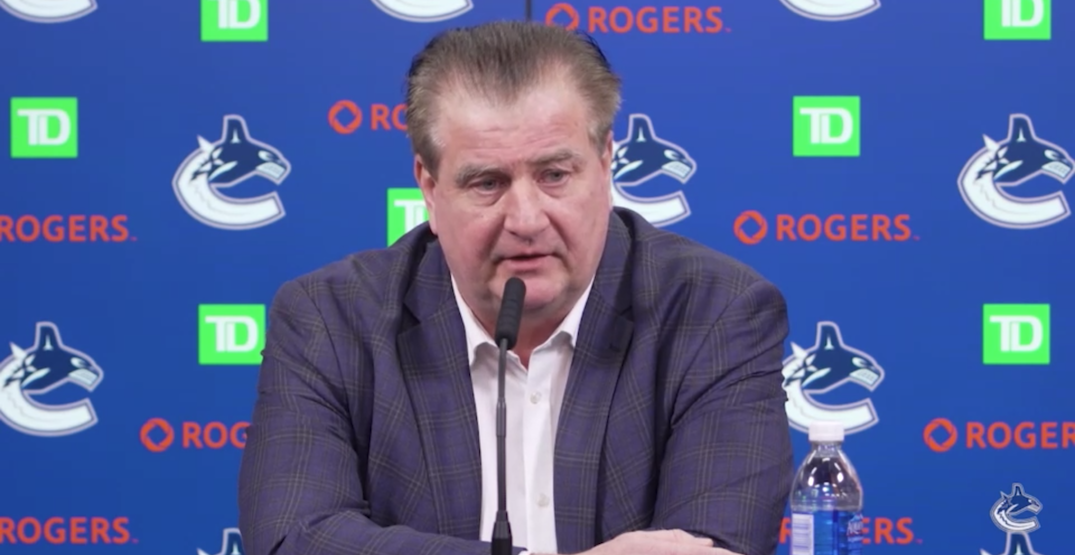 Worn down and frustrated, Jim Benning isn’t ready to quit on his hockey team, though there are plenty of people in this city that hope he would.

With calls growing louder for him to be fired, the Vancouver Canucks general manager held a press conference at Rogers Arena this morning. He was asked about his job security and about some of the chants during last night’s game from fans demanding that he be fired.

Benning was asked if, in his eighth season on the job, he even wanted to continue.

That’s how bad things have gotten.

Vancouver’s 5-10-2 record is the worst start to a season for the Canucks after 17 games since 1997, when Mark Messier was their captain.

Benning is well aware of the team’s problems. Their penalty kill, if it doesn’t improve, will finish with the worst percentage in NHL history. Their power play, which was supposed to be a strength, is one of the league’s worst.

But worse still, it just doesn’t look like the Canucks are good enough to compete for a playoff spot, never mind the Stanley Cup.

Benning met with Canucks ownership this week in what he described as a “State of the Union” with the Aquilinis to figure out what’s wrong with the team.

Unfortunately, it doesn’t seem that anyone at the top of the organization has any idea of how to fix what ails them.

“It’s wearing on all of us”

“We’re looking at everything. We’re trying to find solutions to our problems,” Benning said. “Travis and his staff are working hard. This is wearing on them; it’s wearing on all of us. This is something that I didn’t expect to happen after the moves that we made this summer. But it’s happening and we have to deal with it, and we’ve got to find answers and get things back on track.”

There doesn’t appear to be a Plan B.

Benning gave up a first-round pick to help acquire Oliver Ekman-Larsson and Conor Garland while shedding onerous contracts of Loui Eriksson, Jay Beagle, and Antoine Roussel. He used buyouts to walk away from Jake Virtanen and Braden Holtby.

He pushed all in for this season.

In his eighth year in charge, Benning said he had a team that would make the playoffs. He’s less bullish on those claims now.

“Of course I feel responsible, I’m the leader of this group,” said Benning. “The moves we made this summer, I would have never envisioned we got off to this start, but now we have to deal with it and we got to figure it out. It’s hard. I’m not gonna sit here and say it’s not hard. It’s really hard.”

Benning still likes the moves he made last summer, and he still believes in his core group of players.

The coach is still here, so presumably he still believes in Travis Green also — though he didn’t make any grand proclamations.

So, what’s the answer?

For now, the plan appears to be for everyone to dig in and work hard.

“This is not the start we envisioned. We made some good moves this summer to strengthen the team. I think we fixed some of the issues that we may have had in the past.”

The Canucks aren’t leaking chances at five-on-five like they did last season. But if they “fixed” that, they’d have new problems to figure out.

“Part of our problem is a lot of our good players aren’t playing to their potential… We’re a fragile team right now.”

Benning said he’s “looking at everything.”

“It’s going to be hard. It’s not going to be easy, but I think if we can figure those things out, we’re going to have to string a group of wins together now to get back in. I still believe in this group of players… We still want to be a playoff team.”

“The fans are frustrated”

A significant number of Canucks fans have been calling for Benning to be fired for years now, but in recent months they’ve begun to display it more publicly.

On Wednesday, for the first time, there was a significant number of fans at Rogers Arena chanting “fire Benning.”

Benning heard them, or at least heard of them.

“The fans are frustrated. I get their frustration. We’re frustrated. But we need to figure this out and get back on track and start winning hockey games, and play like I believe we’re capable of.”