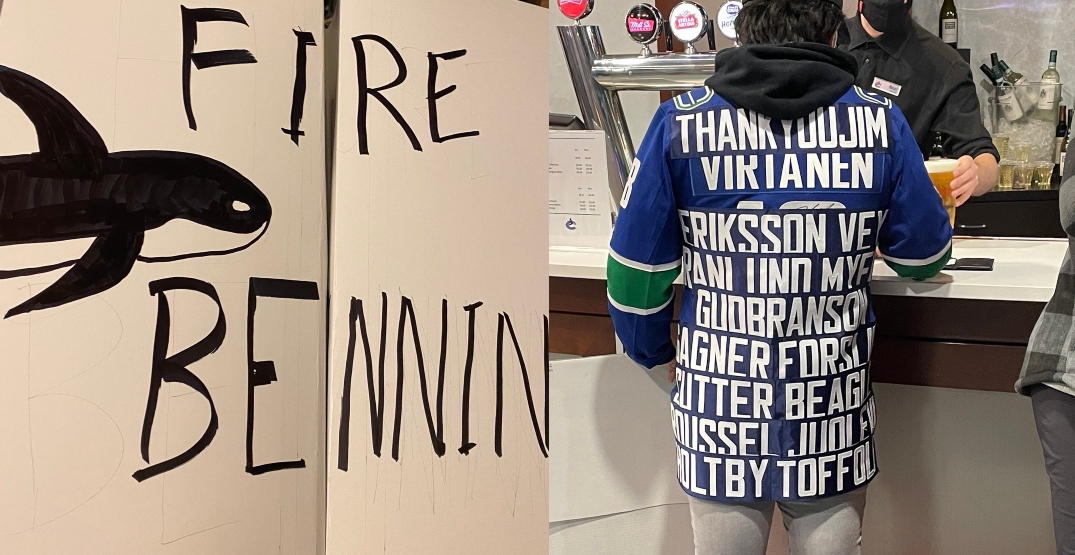 That much is becoming increasingly clear if you follow what they’re saying on social media or local sports talk radio.

And now it’s becoming clearer at Rogers Arena too.

The Canucks were competitive, and they probably deserved a different fate than their 4-2 loss to the Colorado Avalanche on Wednesday night. As one of the worst teams in the National Hockey League, with a 5-10-2 record, this is Vancouver’s worst start to a season after 17 games since 1997.

The heat is on Jim Benning, as you might expect. It’s now on head coach Travis Green, as well as team owner Francesco Aquilini.

Some chants from the upper bowl gained a little bit of traction. “Fire Benning” was the most popular, followed closely by “sell the team.”

Those chants continued onto the concourse after the game.

There were signs in the arena, including ones spotted that said “Sea of Granlund,” “sell the team,” and “fire Benning.”

There was also a sarcastic “thank you Jim” sign.

And yes, there are now people wearing paper bags on their heads.

First sighting of a #Canucks fan wearing a bag on his head. pic.twitter.com/qdMx5IpMzd

the #Canucks took my sign away. how am I supposed to express myself to determine the employment of management? isn’t that what aquilini wanted?? pic.twitter.com/jxkeINFHxt

Here we are. #Canucks pic.twitter.com/jYRIPVtGWo

if you don't understand what is happening with the canucks just show them this video pic.twitter.com/0haLrSIHuv

Benning will be speaking to the media this morning, presumably to try to calm the masses. It will be a tough task.

If the Canucks lose again at home on Friday to the Winnipeg Jets, the cries for change will only get louder.