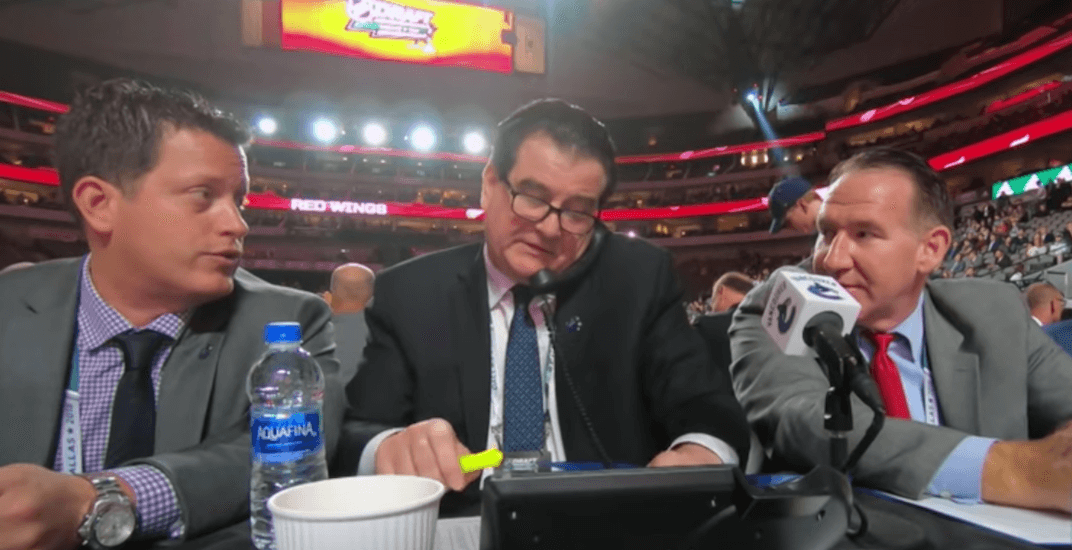 When the Detroit Red Wings stepped up to the microphone, preparing to make the sixth overall pick at the NHL Draft, Canucks management was silently hoping they’d stay away from their guy.

With Filip Zadina and Quinn Hughes left untaken, the Canucks knew who they wanted.

Flanked by Assistant General Manager John Weisbrod to his left and Director of Amateur Scouting Judd Brackett to his right, GM Jim Benning asked the question.

This is just one tidbit of information we got in the latest behind-the-scenes video posted by the Vancouver Canucks.

“If it’s Quinn, I’d like to go up,” said Weisbrod, providing an indication that the Canucks may have shopped their first-round pick if Detroit took Hughes.

“That was a home run,” Benning said.

Benning’s excitement with his staff matched his giddiness when he was interviewed on television. While all teams say they’re thrilled with their picks, you can tell that Benning was genuinely excited to get Hughes.

In rounds 2-7, the video showed us a few trade options that Benning was presented with.

He talked to Leafs GM Kyle Dubas prior to the beginning of the second round.

The Canucks were offered two third-round picks (No. 63 and 86) from the Minnesota Wild in exchange for Vancouver’s second-rounder (No. 37), and they considered it.

“If Woo goes, we make that trade,” Brackett said to Benning immediately after the Florida Panthers picked Serron Noel with the 34th overall pick.

The St. Louis Blues came calling for the Canucks’ pick as well, but Benning declined once again, saying: “There’s a guy that we like that we’re going to take.”

The guy they liked was defenceman Jett Woo, who again, Benning seemed thrilled with.

“We got our guy,” said Benning, patting Brackett on the back before giving a fist-pump in a rare show of emotion from the Canucks GM.

The Los Angeles Kings came calling in the third-round, offering a fourth and a fifth-round pick (No. 113 and 144) for Vancouver’s third-rounder (No. 68). Benning countered by asking for No. 82 and 144, but Kings GM Rob Blake said no.

The Canucks did make one deal on draft weekend, with Washington, trading down in the sixth-round from 161st to 186th, as well as receiving the Capitals’ 2019 sixth-round pick.

Before making the trade, Benning consulted with Senior Director of Hockey Operations and Analytics, Jonathan Wall.

“We’re getting value,” said Wall, presumably bringing an analytical mind to the discussion.

The Canucks took undersized Russian winger Artyom Manukyan with the pick from the Capitals, something that Weisbrod vouched for.

“I would take Manukyan, I’ll take the chance,” said Weisbrod, adding that he saw him at the World Juniors.

It’s rare that fans get to be a fly on the wall during trade calls, so this video is well worth checking out.