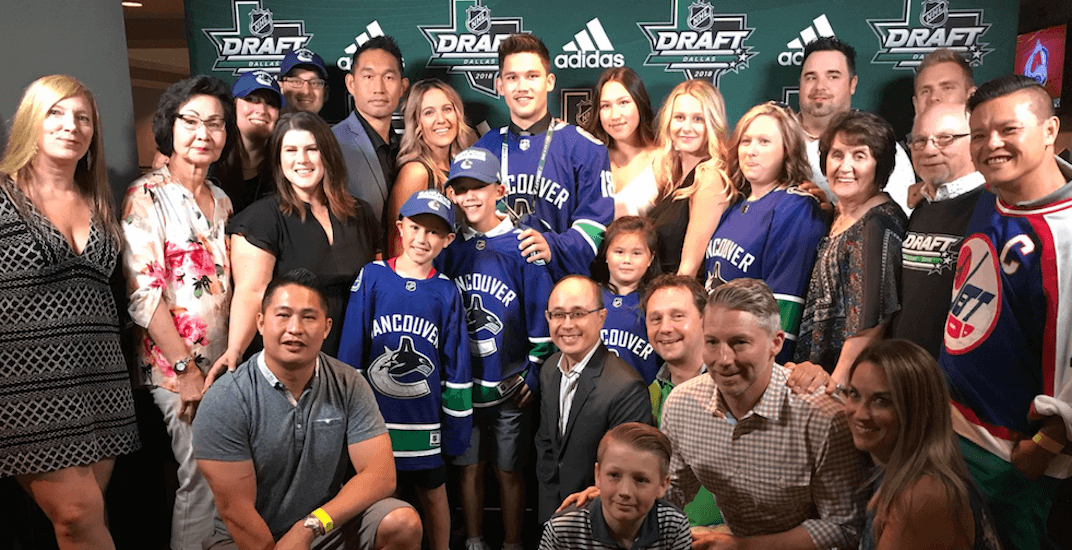 After selecting Quinn Hughes with the seventh overall pick in the NHL Draft on Friday, the Vancouver Canucks had a busy day on Saturday.

Without a fourth round pick, which was given up in the Derrick Pouliot trade, GM Jim Benning was unable to recoup an extra selection in this year’s draft, but he was able to do something about next year.

Here’s a recap of the five players the Canucks drafted in Rounds 2-7:

"To be drafted by the Vancouver #Canucks and go to a Canadian team is really awesome." – @Jett_Woo #NHLDraft pic.twitter.com/UWyNojTzmt

Defenceman Jett Woo is an interesting pick on a number of levels.

First of all, he’s got one of the best names in all of hockey.

His parents named him after Jett Li, the movie star. Fans in Moose Jaw would yell “woo!” – Ric Flair style – when he threw a big hit.

He’s also just the second player of Chinese descent to be drafted into the NHL.

On the ice, the Winnipeg native is a strong, physical defenceman, who possesses great leadership qualities. He suffered a pair of injuries last season which slowed him down, but wound up scoring 25 points in 44 games.

A right-shot, Woo was a member of Canada’s gold medal-winning team at the 2017 Ivan Hlinka Memorial tournament and was recognized as one of Canada’s top-three players at the 2017 U18 World Championship.

“My aunt and uncle live in Vancouver. Love it there. This is huge.” – @tp_madden10 #NHLDraft pic.twitter.com/Fh9djGuukM

Defensively responsible and a good skater with offensive upside, he scored 34 points in the USHL last season and was named to the league’s All-Rookie Second Team.

He’s listed at just 150 pounds, which is feathery light, but has time to fill out his frame. He’ll have plenty of time to develop, as he’s taking the college route, playing with Northeastern University in the NCAA next season.

“This is very special. I am very happy to be coming to Vancouver.” – @toni_utunen #NHLDraft pic.twitter.com/3MpHQNwPVH

Toni Utunen is well-rounded defenceman that split time between second division Leki (12 points in 28 games) and first-division Tappara (0 points in 11 games) in the Finnish pro leagues.

He was captain of Finland’s gold medal winning team at the U18 World Championships last year.

Manukyan can SCORE! He set a scoring record in the JHL in '16.17. pic.twitter.com/R4p58PlMCh

This pick should remind you of Petrus Palmu.

Just like last year, the Canucks selected an undersized forward with skill in the sixth round. Just like Palmu, Artyom Manukyan is a little older than most of the other picks, having just turned 20 years old.

He split last season between the KHL (2 points in 24 games) and Russian junior league (12 points in 12 games). He appeared in five games with Team Russia at the World Juniors, registering two assists.

He set a record for points with 105 in the Russian junior league in 2016-17, so his skill is obvious. If he can overcome his small stature, he might be a diamond in the rough.

Thank you to the @Canucks for drafting me in the @NHL draft! Beyond excited to meet new people and to get to Vancouver! I wouldn’t of had this childhood dream come true without people supporting me in so many ways! The feeling is so hard to put into words. #canucks

The Canucks added a goaltender with their last pick, taking Matthew Thiesen in the seventh round.

Thiesen will play at the University of Maine in the NCAA after a spectacular season in the Manitoba Junior Hockey League, posting a 28-3-1 record.

The 18-year-old was named to the MJHL All-Rookie Team, the MJHL Best GAA, MJHL Champion, and the MJHL First All-Star Team.