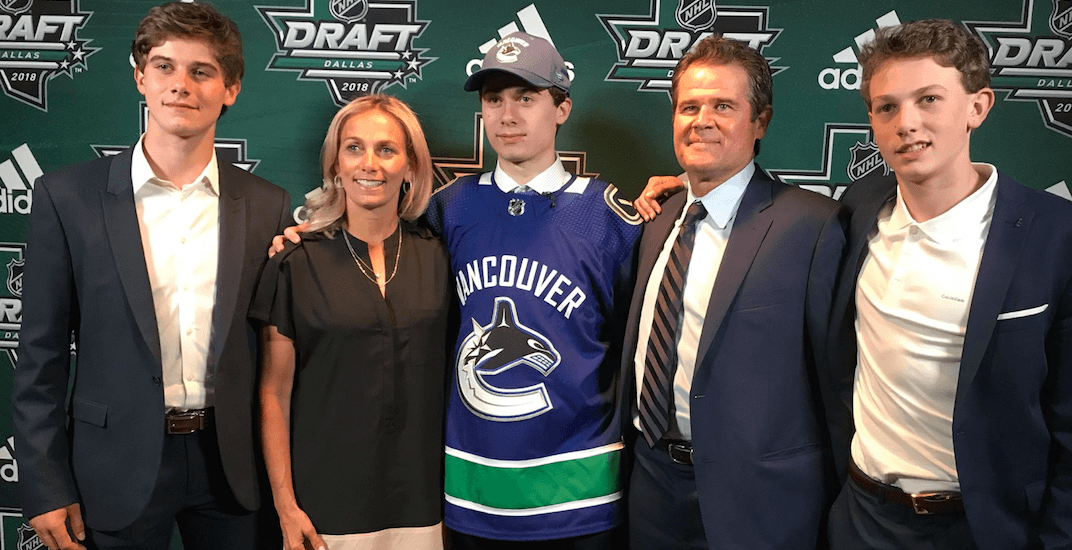 There’s a lot to like about Quinn Hughes, the first-round pick by the Vancouver Canucks at the 2018 NHL Draft in Dallas.

He’s dynamic. He can skate. He can pass. He can run a power play.

And he’s got amazing bloodlines.

Quinn’s father Jim played NCAA hockey and appeared in a couple of professional games in the AHL and IHL, before pursuing a career in coaching. He’s been an assistant and head coach in the minors, and was Robbie Ftorek’s assistant with the Boston Bruins for two seasons.

A dual citizen, Quinn is no stranger to Canada, having lived north of the border during his father’s time as an assistant coach with the Toronto Marlies.

Quinn’s mom Ellen is a member of the New Hampshire Athletics Hall of Fame, playing hockey, lacrosse, and soccer in college.

“It’s awesome just to have them here,” Quinn told reporters, of having his parents guiding him. “It’s nice to have two parents who know what they are doing, so that always makes it a little bit easier.”

And then there’s his brothers.

Jack Hughes is expected to be the top pick in the 2019 draft, which will be held in Vancouver. Canucks fans everywhere are already dreaming of another brother duo leading them to prominence.

“The draft is in Vancouver next year, so that’s pretty funny. I think [Jack is] just watching this and he’s excited for next year and I’m excited to support him next year. It means a lot to have those guys there to support me this year.”

Quinn has already recruited his brothers to the #Canucks pic.twitter.com/q4fSvS0Rgq

The youngest Hughes brother, Luke, is already committed to the University of Michigan. He’s only 14.

Quinn just finished his freshman season at the University of Michigan, and he sounds keen to get to the NHL as soon as possible. He can return to college or turn pro, but he’ll have to make that decision before training camp, as it affects his NCAA eligibility. If he turns pro, he can play in Vancouver or Utica.

Unlike most players coming from junior hockey, Hughes already has experience playing against older players. He was the youngest player in the NCAA last season and played in the IIHF World Hockey Championships, alongside players like Patrick Kane and Johnny Gaudreau.

If the Canucks were happy with his play at the Worlds, it’s hard to imagine that they’d want him to stay at the University of Michigan.

“When he played at the World Championships, I thought he was excellent,” said Canucks GM Jim Benning. “He was playing with NHL players, against other NHL players and he didn’t look out of place at all.”

Quinn is a left shot, but has experience playing both sides and says he’s comfortable playing wherever he’s needed. Could he slide into the Canucks’ top-six next season? That’s a low bar.

If the Canucks are counting on Hughes stepping in right away, perhaps that opens up a trade with one of their other blueliners. They’ve got six defencemen signed to one-way contracts, with Troy Stecher and Derrick Pouliot left to re-sign.

Benning was positively giddy that Hughes fell to the Canucks’ pick. It’s a welcome change for a franchise that hasn’t had a lot of luck at this time of year.

“I was very excited to get Quinn Hughes. He’s a dynamic skater, he’s a skilled player, he’s fun to watch,” said Benning. “The fact that he made it to seven, and he’s a defenceman, and he’s a power play guy, it fit all of our needs.”

Speed and skill is the name of the game in the NHL and defenceman Quinn Hughes has them both. #NHLDraft pic.twitter.com/T0BiGQHAdt