Playing for your hometown team can be a curse and a blessing, and no one demonstrates that more than Jake Virtanen.

On one hand, Virtanen gets to put on the jersey of the team he grew up watching. On the other, expectations for him were grand and sometimes unfair. That’s one of the reasons why a guy like Paul Kariya likely never wanted to suit up for the Canucks.

Despite being drafted at sixth overall, it’s pretty clear that Virtanen will never ascend to first-line status. The question being asked in Vancouver however, is how good can Virtanen be?

We tend to look at Virtanen with tunnel vision in Vancouver. Sometimes, that tunnel extends to Nikolaj Ehlers and William Nylander, but that’s about it.

I wanted to look at Virtanen’s production compared to his draft class, to determine if he’s even average amongst his age cohort. The results are mixed, to say the least.

Virtanen below average against cohorts

This season, there were 32 forwards from the 2014 draft class that played more than 40 NHL games. Of those 32, Virtanen’s 25 points ranked 23rd overall.

When adjusting by points-per-game, Virtanen slides one spot up the list to 22nd overall. The median for points per game was 0.45, a total held by Ryan Donato and former Vancouver Canuck Jared McCann. 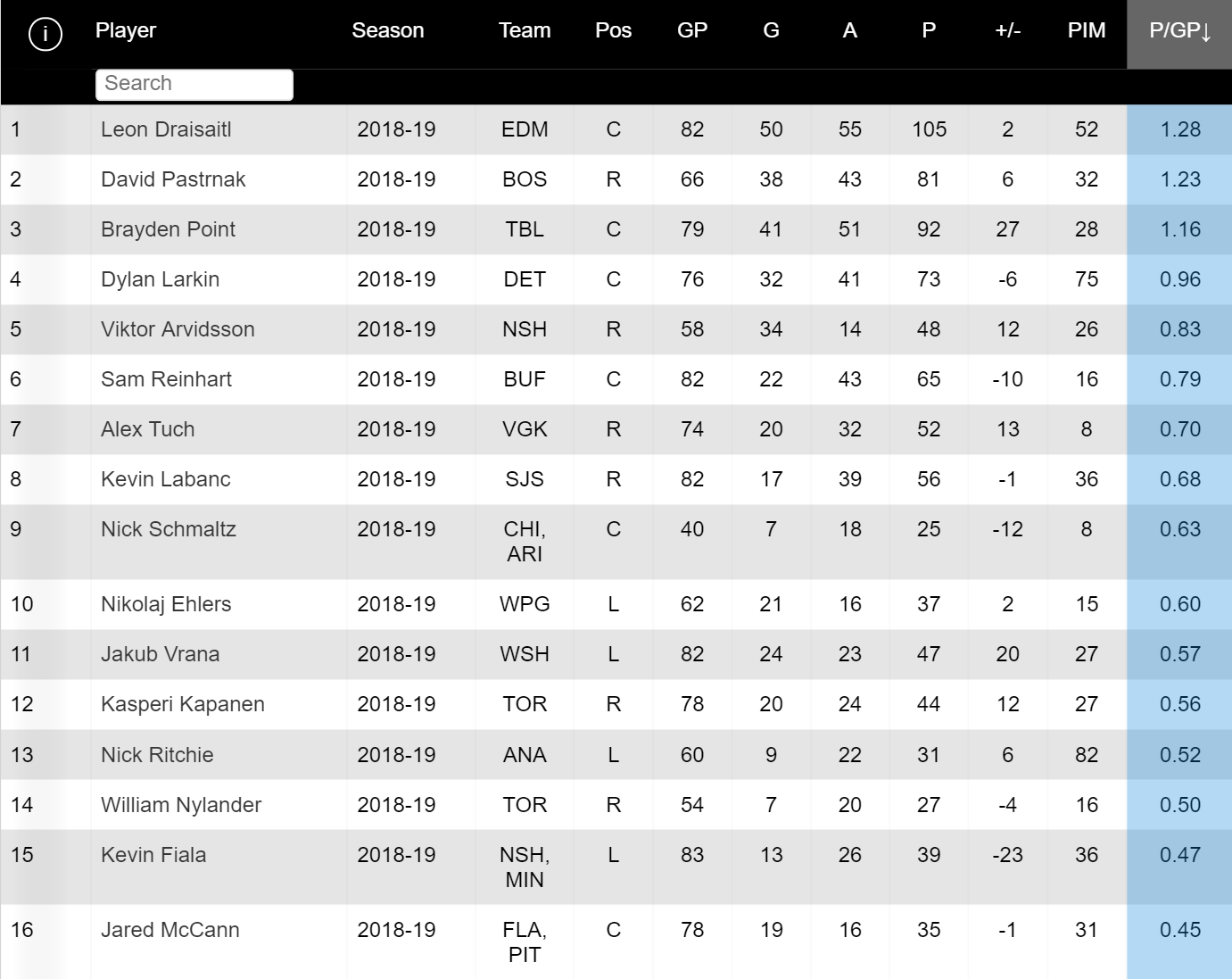 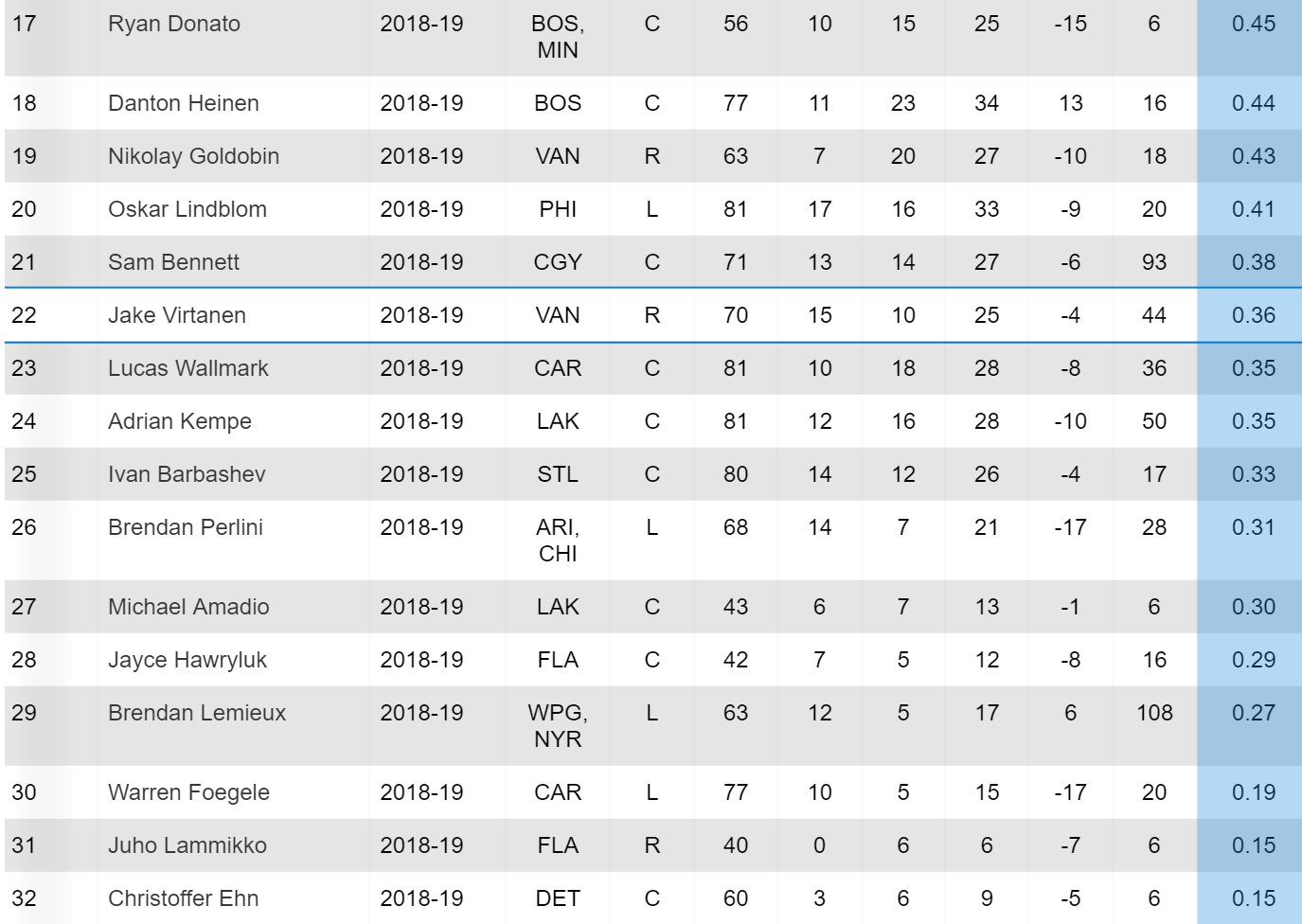 Jake Virtanen’s production was below average compared to the rest of the 2014 draft class. How much room for improvement is there moving forward? (Image: NHL)

One mantra of the Canucks organization this year was to give younger players a chance, and it shows with two guys on this list: Virtanen and Nikolay Goldobin. Of the 16 players below 0.45 points-per-game, both Virtanen and Goldobin had the highest average time on ice.

Virtanen’s goal total does paint him in a more favourable light. A career-high 15 goals had him slip into the top half of these 32 players at 14th overall.

After scoring 10 goals in his first 33 games, it looked like the Abbotsford native was going to bring Jason Brough’s Shotgun Jake prophecy to life by hitting 20 goals.

Why Virtanen still has value

Despite the below-average production, there are reasons to be optimistic about Virtanen heading into 2019-20.

The No. 1 reason why Virtanen has value, however, is his cap hit. He only made $1.25 million last season, meaning his 15-goal year was a bargain. Jim Benning will have to pay him if there’s an uptick in his production, but for now, he’s providing value relative to his cap hit.

To get the most out of the 22-year-old next season, the Canucks need to find him a centre not named Sutter or Jay Beagle. Virtanen’s production doesn’t warrant a long look in the top six, although finding him some power play time should be considered.

In a perfect world, Adam Gaudette takes a step forward next season and creates some chemistry with Virtanen in a third-line role. However, neither player has shown a propensity to set up teammates, so they’d need a playmaking winger.

Could Antoine Roussel be a fit there? He had the most primary assists per-60 at even-strength on the Canucks last season aside from Pettersson. He could bring a steadying veteran presence to the line. Not to mention, that line could wreak havoc if they play with an edge.

Should Canucks trade or keep Virtanen?

One reason why the Canucks organization needs to do some serious thinking about Virtanen’s production is that he’s one of the team’s best trade chips. There are still some serious holes on the right side of the Canucks’ defence and alongside Pettersson and Horvat in the top six.

There aren’t many trade chips the Canucks can dangle. Ben Hutton might make that list, but he’s an RFA. Goldobin doesn’t hold much value either after a tumultuous campaign.

Other than Jake Virtanen, Nikolay Goldobin is one of the only other expendable Canucks that might have some trade value. (Image: Vancouver Canucks / Twitter)

If there’s a team that values Virtanen highly enough to part with a young right-shot defenceman, that’s about the only scenario where the Canucks might realistically swap. Some targets might be Colin Miller of the Vegas Golden Knights or Rasmus Ristolainen in Buffalo. However, a deal for either of those guys will take much more than Virtanen.

For the reasons listed above, the Canucks are probably best off keeping Virtanen unless they’re absolutely blown away by an offer. There’s a good chance that the former 6th overall pick tops out as a 20-goal, 40-point guy, but that still holds value in today’s NHL.

The Canucks don’t have a lot of players who could excel in the throes of physical playoff hockey. Virtanen is one of the few who could. Whether or not we get to see that in Vancouver remains unseen.