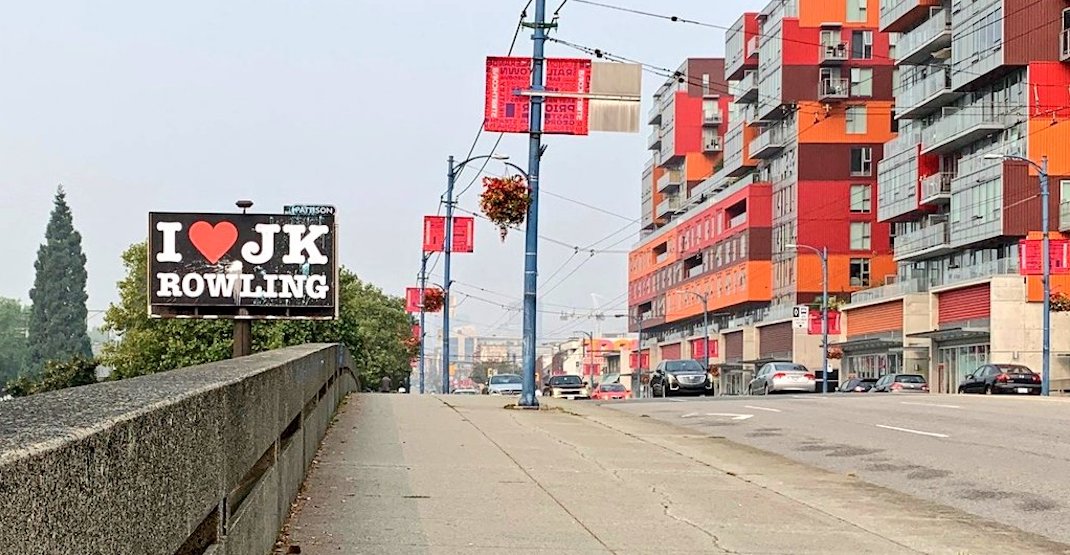 A billboard celebrating author J.K. Rowling in Vancouver was taken down after facing backlash and being condemned for its “hateful expression.”

The sign, which was visible from the East Hastings viaduct, read “I heart J.K. Rowling”.

Many were critical of the billboard, calling it “veiled transphobia,” as a result of previous comments made by Rowling in criticism of transgender people.

Rowling also wrote an essay sharing her thoughts on the matter.

Vancouver city councillor Sarah Kirby-Yung was among those condemning the presence of the billboard, saying that it was meant to “stoke hate, exclusion, and division.”

Hi @pattisonoutdoor. I’m condemning this clear, intentional messaging meant to stoke hate, exclusion & division. This kind of hateful expression sets us all back not moves us forward. Hope we see an outpouring of love solidarity that drowns out the hate. #lovenothate #takeitdown https://t.co/T5k0d8MVLO

So, @pattisonoutdoor, why did you allow a billboard that targets trans people? If you’re an actual ally to LGBTQ2+ people, I expect this will be taken down immediately. https://t.co/qlKDyJbHJJ

After much criticism, the sign was removed by Saturday afternoon after being defaced.

I’m glad to see @pattisonoutdoor quickly removed this sign. I get that they might not have been aware of JRK’s recent statements.

That said, I can’t imagine the intent of those paying for the ad was anything other than to antagonize an already marginalized community.