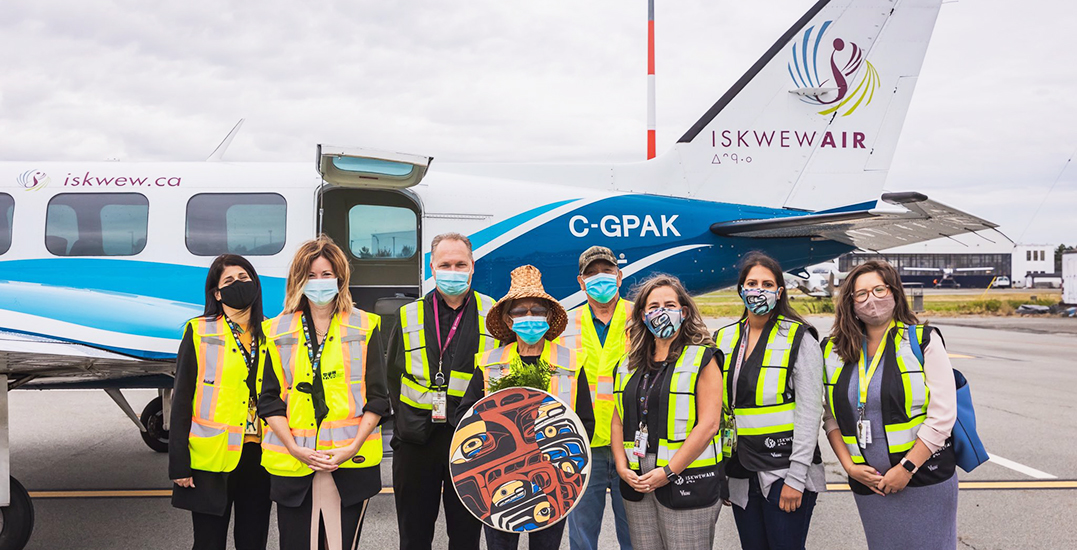 After its inaugural flight from Qualicum Beach, the Sweetgrass Warrior was greeted with a cedar brushing and blessing (Iskwew Air/Twitter).

Iskwew Air officially launched in Spring 2019 and mainly operated as a charter service over the COVID-19 pandemic. Iskwew (pronounced ISS-KWAY-YO) is the Cree word for woman.

Service between Qualicum Beach and YVR’s South Terminal officially began earlier this week, filling a much-needed gap. According to the airline, there has been no scheduled service at Qualicum Beach Airport since April of last year.

Airline CEO Teara Fraser, an experienced pilot and Métis woman, is also an entrepreneur and leader in BC’s aviation industry. She tells Daily Hive that they’ve planned the launch extensively, engaging with many different community members.

“We’ve been in conversation with the town, with the nation through engagement sessions, and we know from our surveys that people have felt differently about travelling through different times through the pandemic,” Fraser explains in an interview. “But there are essential travellers that depend on being able to be connected to the mainland in an easeful way.”

The Sweetgrass Warrior is connecting people to each other and to the land as it lifted off on our inaugural flight today to begin weekly scheduled service between Qualicum Beach Airport & @yvrairport South Terminal! ✈️🌿💜 https://t.co/4TzLDzEYNH #IndigenousBusiness pic.twitter.com/IFfLxuomvq

She adds that the response to Iskwew Air offering the new route has been “overwhelmingly positive,” adding that they’ll continue to learn and adjust as service increases.

“We’re starting with a limited service,” Fraser says. “We’ll be flying on Mondays, Tuesdays, Thursdays, and Fridays to begin with. And as we assess demand and continue to respond to COVID-19 and what that puts before us, we will adapt and respond accordingly.”

“We wanted to start with service that we believed we could maintain through continued COVID-19 challenges and with the hopes that things continue to improve and we can continue to offer more and more flights between these communities.”

This morning we were thrilled to celebrate @IskwewAir 's first scheduled commercial flight between YVR and Qualicum Beach. What's an inaugural flight without a water arch? Congratulations @tearafraser and team on this major milestone. pic.twitter.com/VCf0whoQ4v

When running chartered services, Fraser says that safety and sustainability were at the top of mind.

“We’ve been very wise with choices and resources and tried to be responsible during times when folks were asked not to travel,” she says. “We’re concentrating right now on offering good service to Qualicum Beach, and we are also very committed to being part of a more sustainable transportation system in the future.”

Today marks an important milestone in Iskwew Air’s journey of connecting people with each other and to the land. ✈️🌿💜 https://t.co/4TzLDzEYNH 3/3 pic.twitter.com/1uJCRwgTzh

Fraser says that the airline is also committed to acknowledging that they operate on the lands of the Qualicum First Nations people.

In addition to sustainability, the company also has equity in mind. Iskwew Air’s maintenance department is lead by a woman even though Fraser notes only 2.3% of aircraft engineers in Canada are female.

“What we’re committed to doing at Iskwew Air is to reimagine, rematriate, and rebuild our aviation industry, centring equity and sustainability.”