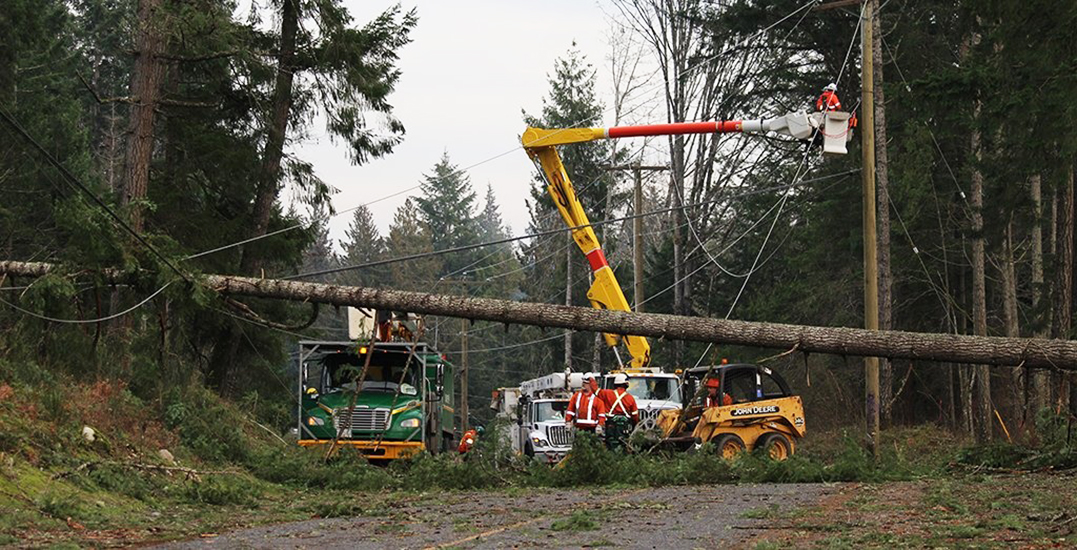 BC Hydro crews work to repair a damaged power line following a storm (BC Hydro/Twitter).

An intense storm has caused power outages for nearly 30,000 BC Hydro customers across the province.

Over 22,000 of the customers affected are in the Lower Mainland and the Sunshine Coast. The Crown Corporation says in a notice that “strong winds overnight caused some significant power outages in Metro Vancouver, including damaging a few transmission lines on the North Shore.”

While work to repair the damage is currently underway in North Vancouver and West Vancouver, three poles need to be replaced, and BC Hydro hopes to “restore power to customers in the area by 4 pm today.”

Crews are on site at an outage affecting 14,500 customers in #NorthVan. They're working on repairs and estimate to have power restored to the area by 4 p.m. Updates will be shared as available here: https://t.co/MG1ysTHl6f pic.twitter.com/EbSJsZPEOs

Crews have been assigned to an outage affecting 1,000 customers in #Vancouver. They'll be sharing the latest updates here: https://t.co/ZOvNGoCu9t #YVR pic.twitter.com/xwBW3Bwldw

Crews have been assigned to an outage affecting 670 customers in #Vancouver. They'll share any available updates here: https://t.co/RFgpGhRFCp #YVR pic.twitter.com/NRLwxLhMnd

As a result of the widespread power outages, 10 schools on the North Shore have also had their start of classes delayed until 11 am.

Over 2,200 customers are also affected in Northern BC and just over 4,000 on Vancouver Island.

A special weather statement remains in effect over parts of Metro Vancouver, with high winds expected to continue.

The bulletin, issued on Tuesday morning, is in effect in the following areas:

Winds of up to 50 km/h and gusts of up to 70 km/h are expected to shift direction throughout the day.