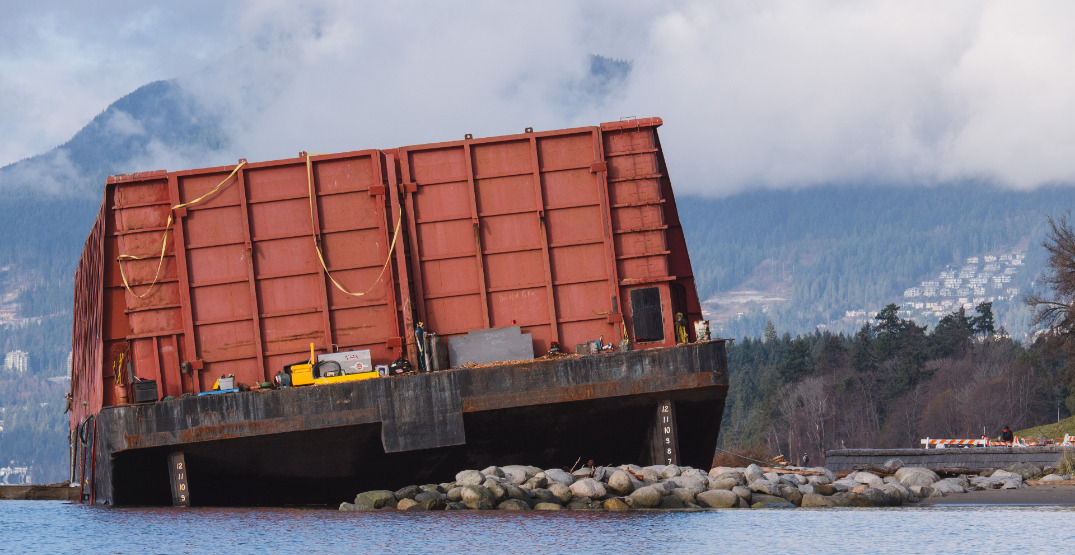 The stray barge that washed ashore in Vancouver has led to many fun and exciting news stories, one being a Twitter account claiming to be the barge itself called @EnglishBayBarge.

There has been some spicy interaction between the barge and the local Vancouver media in recent weeks.

Daily Hive had an exclusive one-on-one with @EnglishBayBarge and got some fascinating insights into what led to the barge account and their thoughts on the media landscape.

First, we need to understand why the person behind the account made it in the first place.

“I was bored. I thought it would be fun for a few tweets and maybe a day.”

Daily Hive asked the poignant question, who is it?

“I’m a Vancouver professional with a boring office job who keeps tabs on local events and is enjoying the ability to speak freely for the first time ever,” they said.

Listen. Don’t @ Barge me if you think one of my jokes was tasteless. I do not give a single sea star because
A. I’m a a brainless barge
B. I have no reputation to uphold
C. I really don’t care what anyone thinks
D. This is a highly stupid account pic.twitter.com/Bfx7O58xCq

Will the person behind the account carry on once the barge is moved?

When the barge Twitter account first jumped onto the Vancouver social media scene, they seemed to be poised to make a serious bid to be the next mayor of Vancouver.

Jokes aside, things have gotten quite heated in recent weeks. Daily Hive asked the barge what they make of people arguing with an apparent joke account.

“I expected it. So many in the media spend more time preaching their views than reporting the news. Barge supports journalism, but not when journalists talk down to the readers, tell them what to think, what’s tasteful and what’s not.

What has the barge learned about Vancouver through the lens of this joke account?

“We are becoming far too polarized, like America. Too many extremists, both right and left. It’s sad. But, there are still a lot of people, the majority I’d say, who recognize life is hard, and we could all use a cheap laugh,” they said.

“Those are my people. The silent majority. F*ck the rest.”