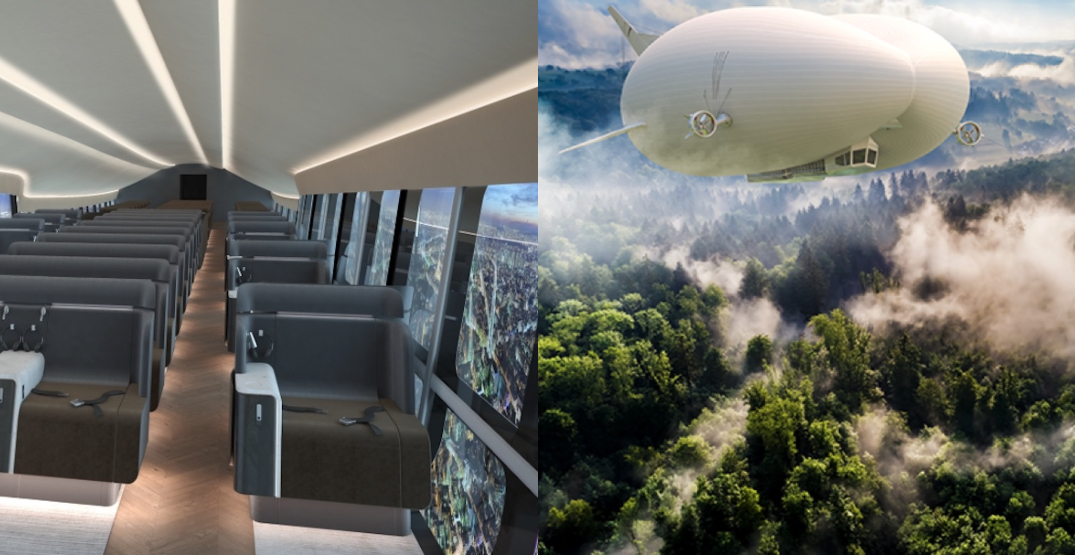 Look to the past for lower emission solutions to inter-city air transportation; a modernized and optimized version of the zeppelin is being pitched as a possible alternative way of getting around compared to conventional air travel.

Ten orders of the Airlander 10 model of airship, designed and manufactured by UK-based firm Hybrid Air Vehicles (HAV), have been made by Air Nostrum, a regional airline in Spain.

The partnership announced last week commits the airships for delivery starting in 2026, with Air Nostrum set to use the airships for commercial passenger airline services. It is anticipated the Airlander 10’s use will reduce Air Nostrum’s emissions by up to 90% on its existing regional services.

The Airlander airship has performed test flights for the past decade and Hybrid Air Vehicles now intends to commence production on the first airships for the Air Nostrum order later this year. 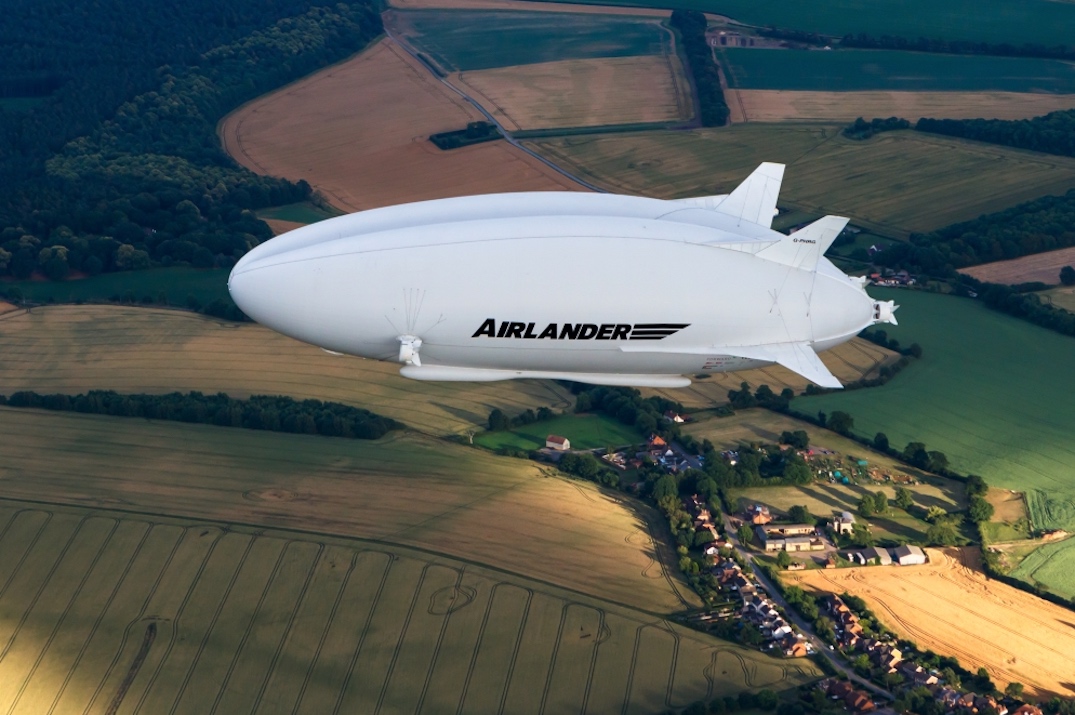 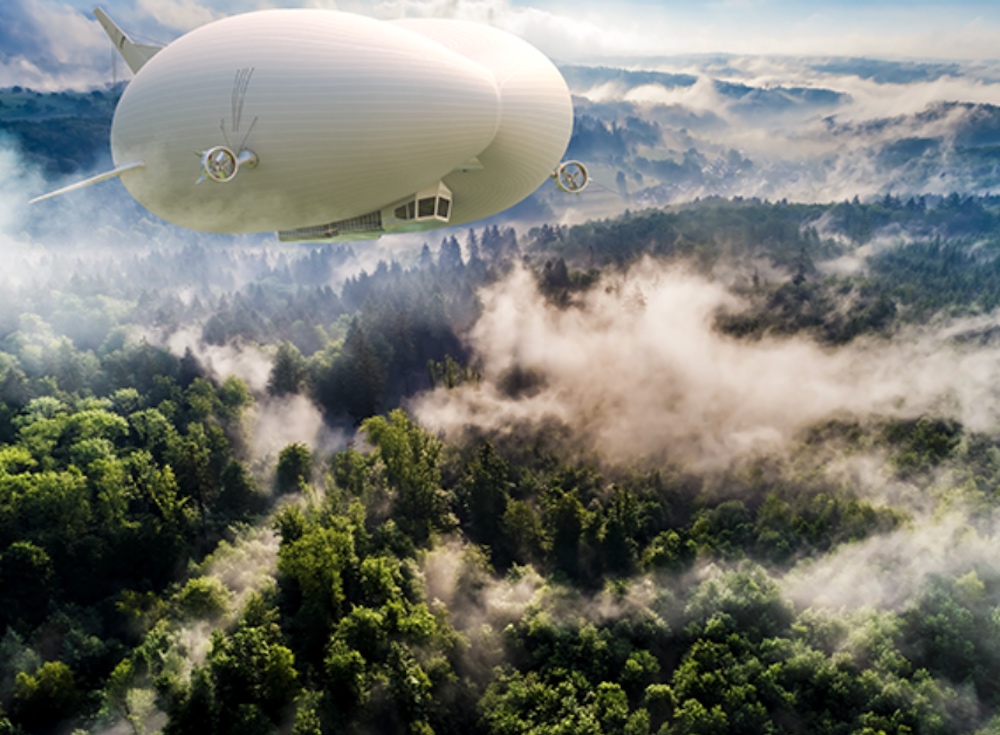 On the heels of its first contract with an airline, the company is marketing itself for long-term expansion and has charted the course for the potential suitable use of its airships on specific inter-city routes.

In its case study, it has identified three inter-city routes that could feasibly be served by the Airlander 10, namely Liverpool to Belfast, Oslo to Stockholm, and Vancouver to Seattle.

HAV estimates the Airlander 10’s travel time from downtown Vancouver to Seattle City Centre is four hours and 12 minutes over the 205-km distance, based on the airship’s maximum speed of 130 km/hr.

This travel time also includes a 40-minute check-in, security, and loading process at the departure terminal. The airships will typically operate from purpose-built terminals, away from traditional airports — capable of taking off and landing on almost any flat surface, including water.

But how does this airship concept compare to other modes of transportation?

A car ride between the downtowns of Vancouver and Seattle, a distance of 228 km, is two hours and 30 minutes in optimal traffic and border control conditions.

Amtrak’s Cascades passenger rail service is five hours and nine minutes over 224 km, but this service is known for being often delayed due to freight traffic priority. 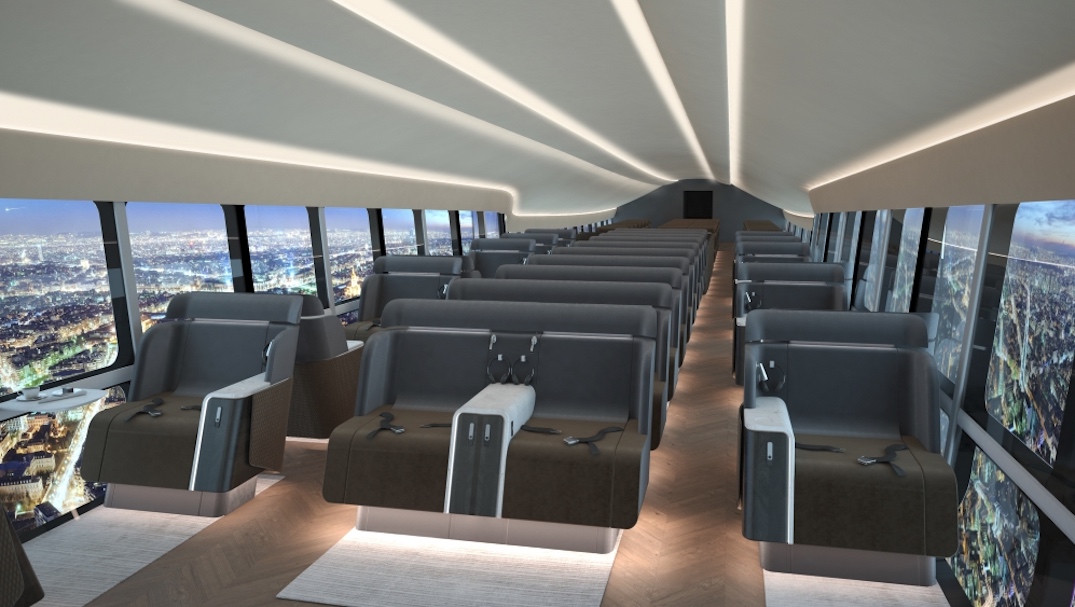 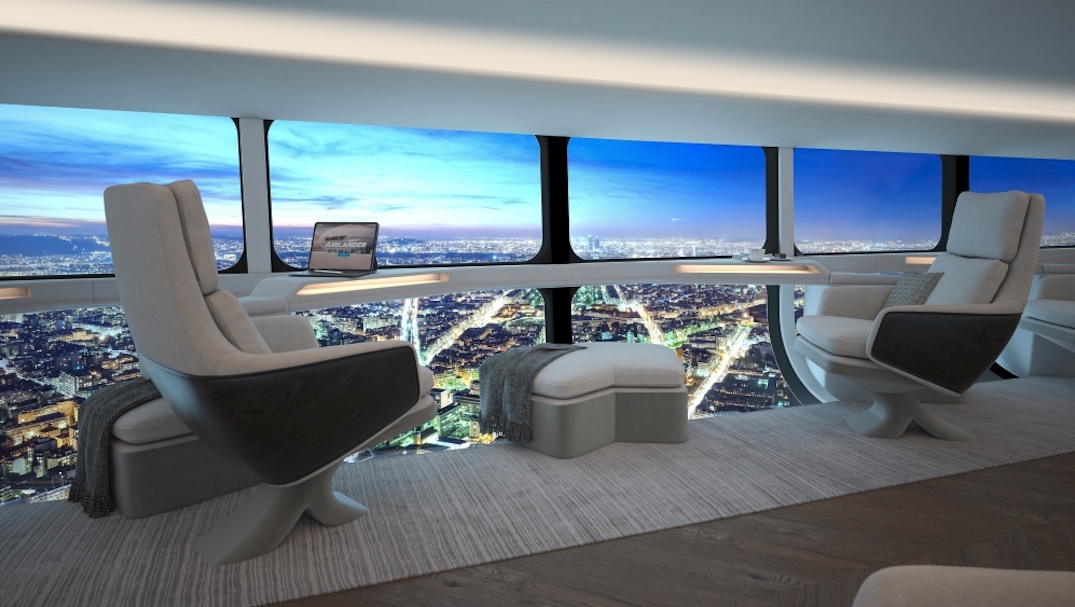 Each Airlander 10 airship will have a capacity for up to 100 passengers — similar to the capacities of the small commercial aircraft that operate on short-haul, intercity routes like Vancouver to Seattle.

Although its maximum air speed is much slower compared to a commercial jet, HAV calls attention to Airlander 10’s optimal passenger experience, given its similarities to a “fast ferry” in the sky, as opposed to an airplane. It features ample space for passengers to relax, stretch, socialize, work, and eat and drink, and large windows allow for natural light and optimal views. The flights are also extremely quiet with low vibration.

Moreover, the Airlander 10 is significantly less affected by turbulence, and capable of flying in a wide range of weather conditions, with airships capable of safely taking off and landing in up to 56 km/hr of wind. The airships are also not cross-wind restricted and can turn into the wind and take off in any direction, withstand lightning strikes and icing conditions, and operate in the same temperatures as planes.

The range of the airship is 350 km on battery-electric and 750 km on hybrid-electric. Its maximum altitude is 20,000 ft.

Airships and blimps, of course, depend on gas for lift — and a certain infamous zeppelin (Hindenburg) with a flammable shell that contained a very flammable gas (hydrogen) ended the airship era more than eight decades ago when it caught fire and crashed in New Jersey.

Like blimps, the Airlander 10’s hull is filled with helium, which is a non-flammable gas. According to HAV, its airship design is a unique combination of aerodynamic lift (like a plane), lifting gases (like an airship), and vectored thrust (like a helicopter). The airship generates up to 40% of its lift from aerodynamics by the passage of air over the hull, and the remainder from buoyant lift from the helium.

The vertical ascent and descent of the airship are controlled by adjusting the temperature difference between the outside air and the helium. 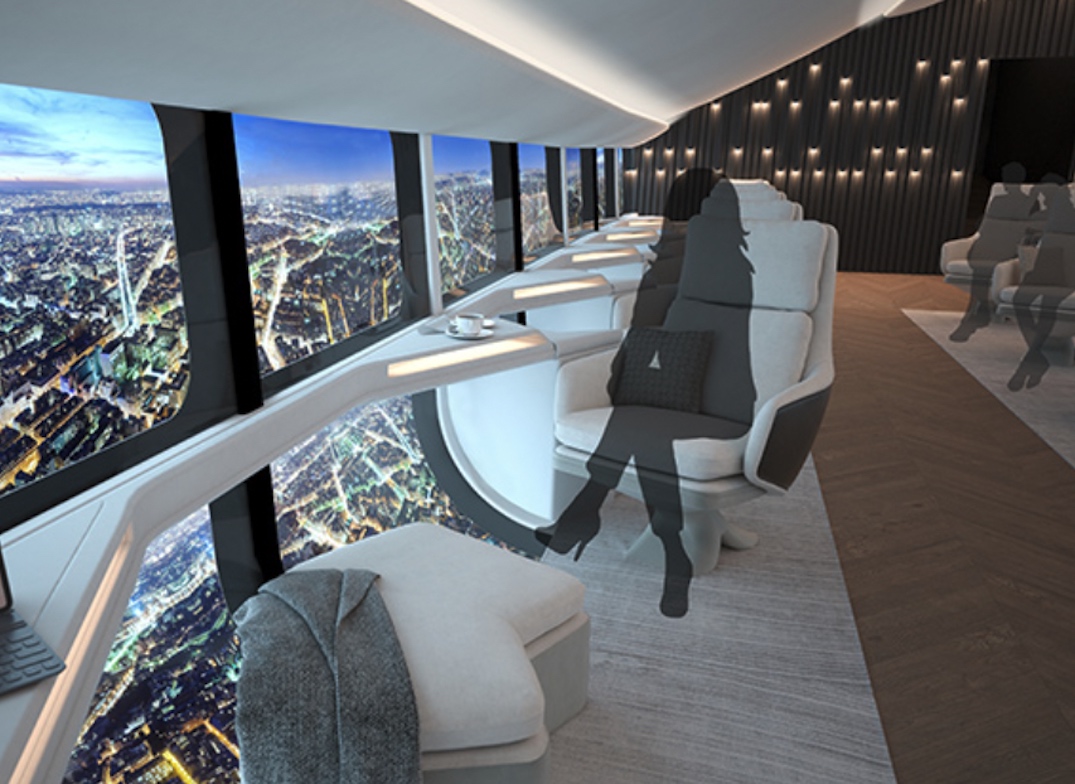 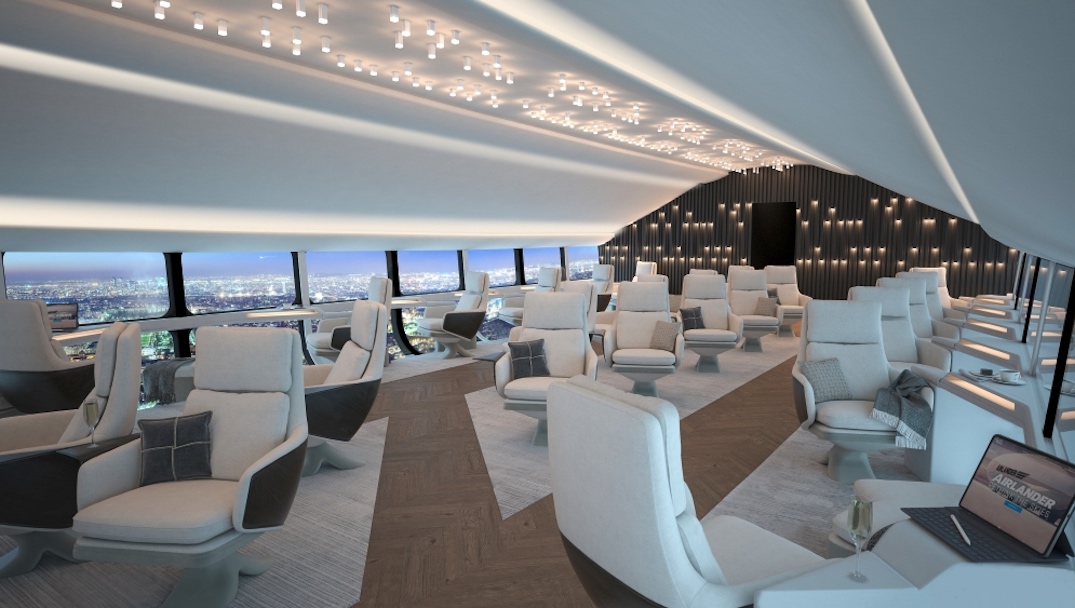 There is already a major market for inter-city travel between Vancouver and Seattle. Other than driving, much of the demand is currently being filled by commercial flights from YVR to SEA. In fact, this is the busiest international flight route for SEA, with the services by various airlines — Air Canada, Alaska Airlines, Delta, United Airlines, and WestJet — typically recording a combined total of over 600,000 passengers annually.

In 2018, given the evident demand, Harbour Air launched a floatplane service from Coal Harbour in downtown Vancouver to Seattle Lake Union, and over the longer term, it is looking to convert its aircraft fleet into battery-electric.

Last year, Helijet signed a deal to integrate its services with New York City’s Blade Urban Air Mobility, which includes the goal of introducing the first commercially available Electric Vertical Aircraft to the BC market.

With speeds of 400 km/hr, the travel time of high-speed rail between Metro Vancouver and Seattle is estimated to be about one hour, including potential stops along the way in Bellingham and Everett. The state’s investment could be matched by up to US$700 million in federal funding from US President Joe Biden’s national infrastructure plan. The governments of British Columbia and Oregon have yet to commit their share of the advanced planning costs.