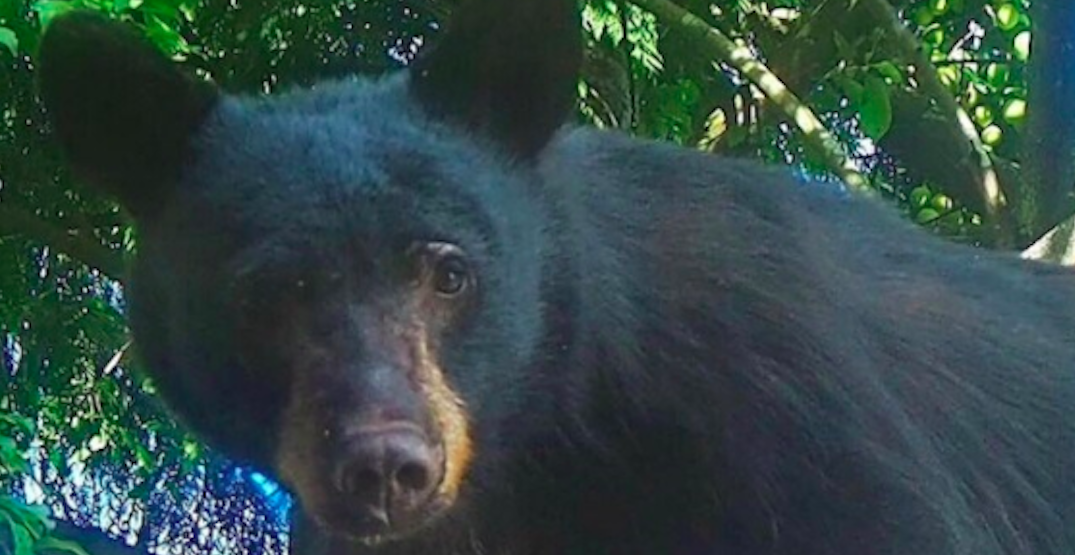 A bear in North Vancouver that was put down after becoming habituated to human food is being remembered fondly on social media.

And according to a Facebook post by the North Shore Black Bear Society, the food was left out on purpose in an effort to entice the bear for photos and videos.

The post states that the bear – affectionately named Huckleberry – was first spotted on July 2. “You were eating scraps from an organics cart – the enclosure had been left open,” the tribute states. “Even though you were eating, you were very easy to move on. We walked you back to the forest and hoped to see you again on the trails.”

The bear was seen again not long after, eating berries by the roadside. “As we walked you back to the forest, you stood and sniffed a garbage can,” the post continues. “We used a firm tone and told you to leave – you listened. As you walked away, you left a bright pink scat full of huckleberries! We were so proud of you for eating natural foods, despite all the tempting treats residents had left available to you. From that moment, we named you Huckleberry!”

Afterwards, the bear was spotted “many times” and “would roll your tongue out at us to smell the air as we walked together back to the forest. Residents told us you passed through their property, but you were easily moved on. You were such an easy-going, calm bear. The perfect Deep Cove resident,” the post states.

Sadly, though, that would soon change.

“Reports started coming in of you finding easy rewards from garbage and organics carts. People admitted they allowed you to do that for a video and they neglected to move you on…a death sentence,” the post states. “If only people had used a firm voice with you, you would have listened. Or respected you enough to not have any garbage or food scraps accessible in the first place. We did you a disservice, Huckleberry.”

Things came to a tragic end on July 31, when Huckleberry was eating berries at the edge of the forest. “We headed out to make sure you were not being crowded or chased by dogs,” the post states. “By the time we reached you, you were being followed by residents who wanted a video of you eating organics from an unlocked cart. Due to the crowd of people, it wasn’t safe for us to move you on. When you finished eating, you calmly walked by and left our gaze. That was the last time we saw you.”

Later that day, the post reads, “you were tranquilized by the Conservation Officers and taken away to be killed. You were willing to coexist, but people were not.”

The post concludes by stating that every encounter with Huckleberry showed “that you were a good natured bear, we are deeply sorry that we couldn’t save you. We’ll always have a place in our hearts for you, sweet boy.”