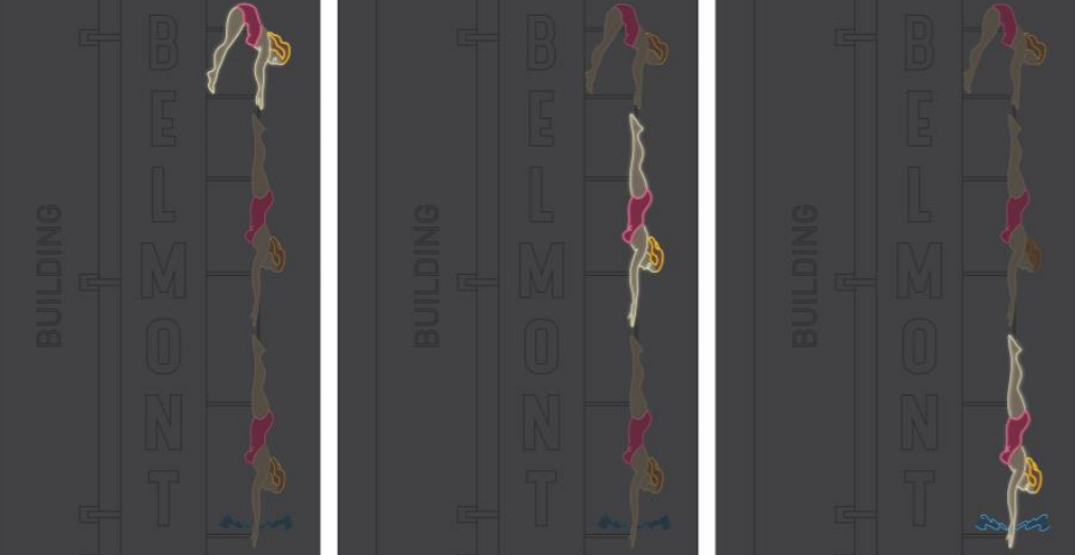 Artistic rendering of the animated sequence for the diving girl sign at Hotel Belmont. (Hotel Belmont)

If the owners of the newly renovated Hotel Belmont on the Granville Entertainment District (GED) in downtown Vancouver want to install a new neon sign, it will need to have a stationary illumination, at least for now.

The hotel operator wants to install a new replacement vertical “Hotel Belmont” text neon sign at the building’s prominent corner with the intersection of Granville Street and Nelson Street, complete with neon figures of a diving girl.

The sign with the diving figures was approved by city staff in 2019, but later in the year, the operator returned to the City with a request to create an animated sequence — a chasing light system — for the diving figures.

While the sign bylaw for the area permits neon signage at this section of the entertainment district, animated signs are not. But the boundary for where animated signs are permitted is only feet away from the proposed location — just north of Nelson Street.

Artistic rendering of the animated sequence for the diving girl sign at Hotel Belmont. (Hotel Belmont) 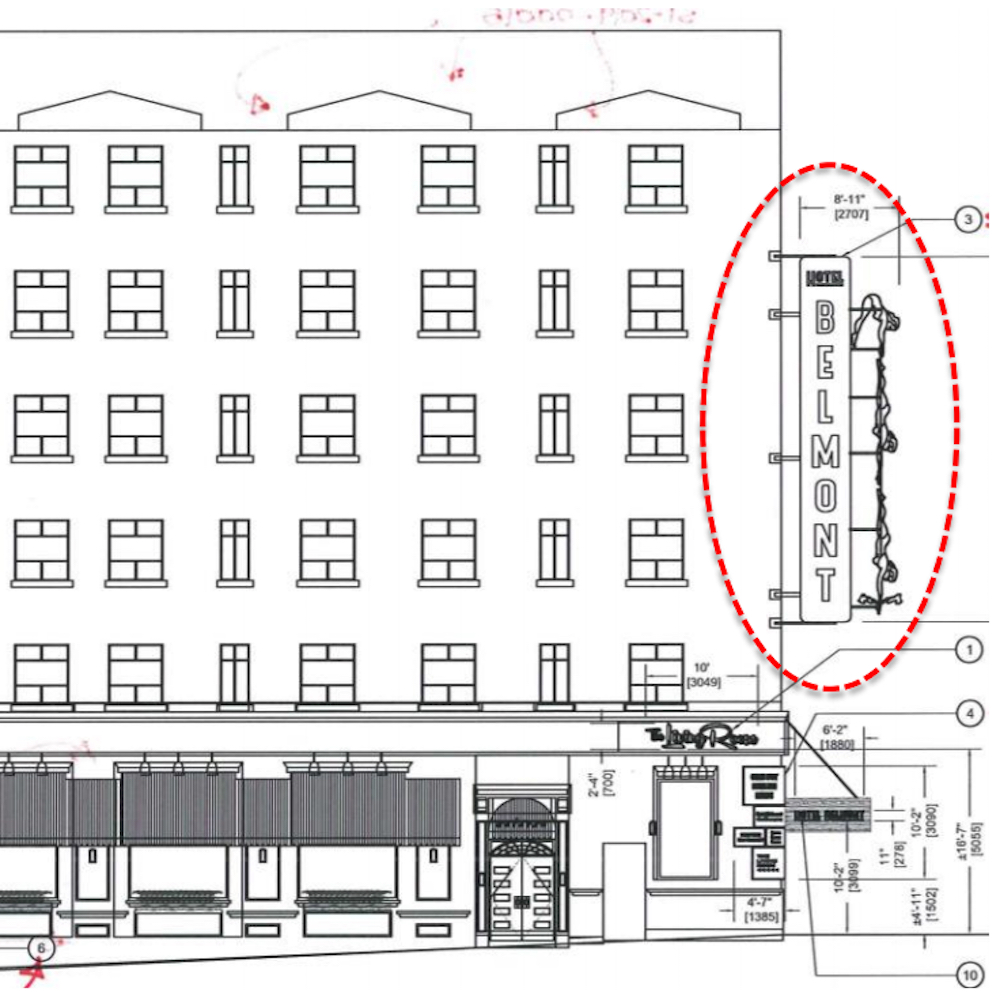 The operator then requested a relaxation of this sign bylaw based on “unnecessary hardship,” with the applicant asking city council to reconsider the director of planning’s decision to not grant an exemption.

During a public meeting earlier this week, city council voted to uphold the decision by city staff, with councillors Sarah Kirby-Yung and Michael Wiebe siding with the applicant.

Jeff Leung, the general manager of Hotel Belmont, and the regional manager for Pacific Reach Properties told city council the business has already spent over $60,000 on the associated costs of the new sign.

He explained that the diving girl feature is a “tongue in cheek” and “cool retro” element inspired by other vintage hotels, and part of the overall branding of the hotel. Its bathrooms feature a “no diving” text pattern embedded into the titles.

“We truly believe that this sign would provide a much-needed enhancement to the branding and marketability to the hotel by driving more foot and social media traffic to the area, and therefore expediting the curve of recovery,” said Leung, who also sits on the board of directors for Tourism Vancouver.

“Without having this chasing light feature, it would definitely result in unnecessary hardship because of the failure to physically execute the unique sign concept as intended. It would also lead to further hardship with a delayed recovery projection. The neighbourhood would also experience hardship as the community would not benefit from the elevated vibrancy.” 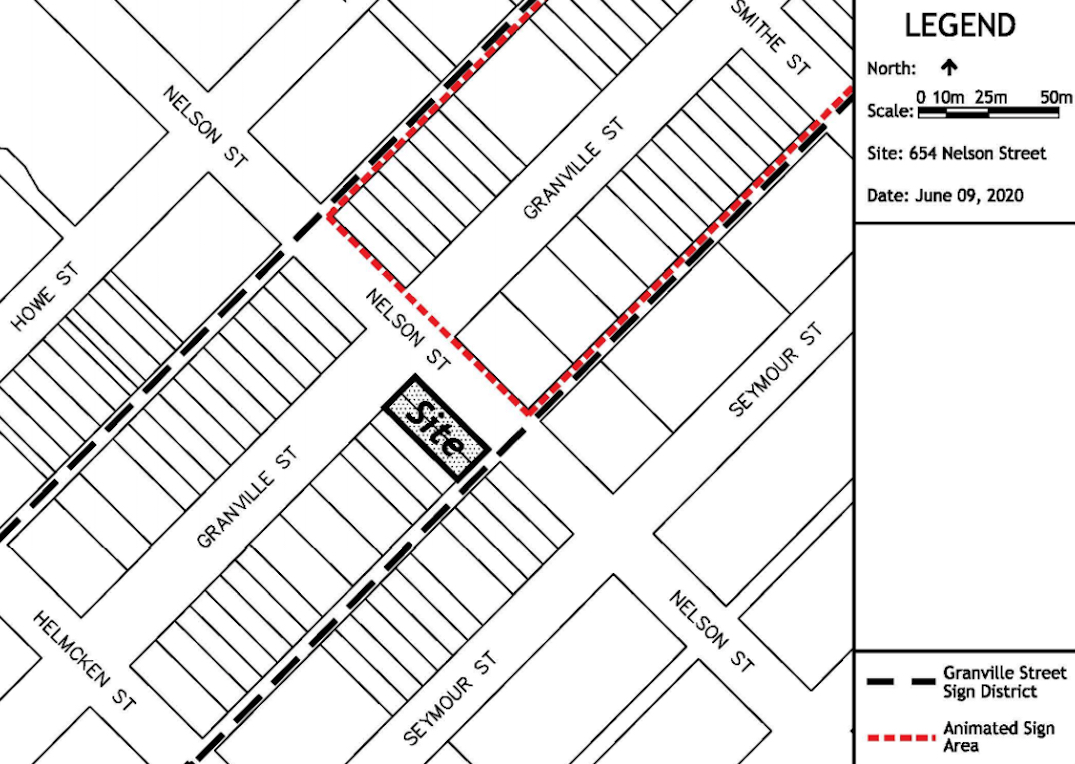 Location of the animated sign boundaries on the Granville Entertainment District, which stretches between north of Nelson Street and south of Hastings Street. (City of Vancouver)

This theming is subject to a certain degree of controversy after female employees submitted a human rights complaint last year for “gender discrimination, an overly-sexualized work environment, and failure to respond appropriately to incidents of harassment or assault in the workplace.”

Some councillors asked whether the sexually suggestive content of the sign was a consideration for the planning department, but city staff asserted the only issue they had with the design was the location on the wrong side of Nelson Street.

City staff also reasoned that their definition of “unnecessary hardship” relates to unique physical circumstances, not an inconvenience for a more lenient standard and financial considerations.

They added there are also concerns with driver and pedestrian safety, and the brightness of the animation, given the proximity of residential developments, specifically just to the east on Seymour Street.

The sign bylaw was last updated in 2017, with city staff noting they have received similar proposals before, and that they think “there’s clearly an appetite for this kind of signage.”

Leung said the hotel could theoretically install the sign but not turn on the animated feature. If it is turned on, the sign’s brightness and animation speed can also be adjusted. 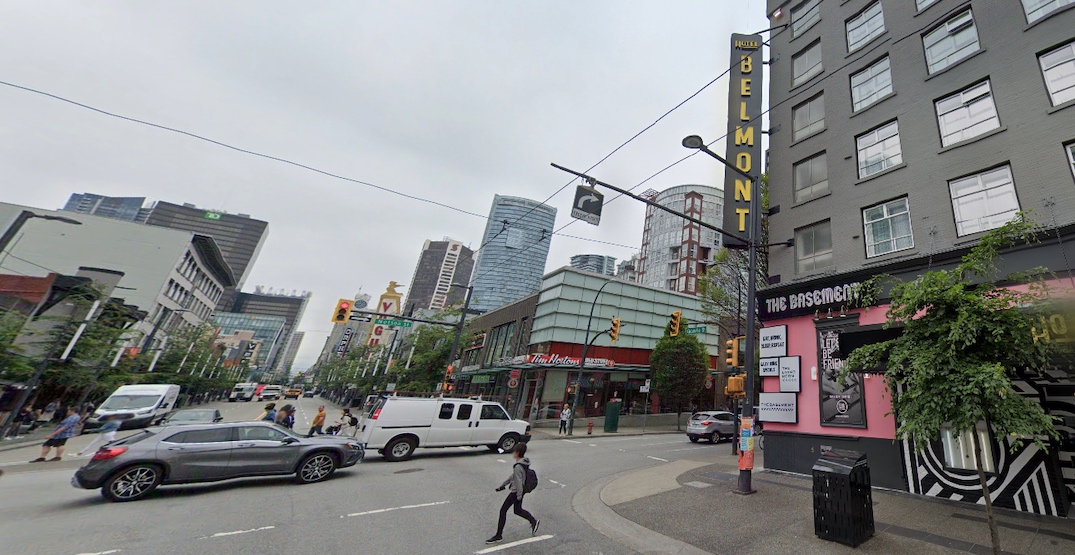 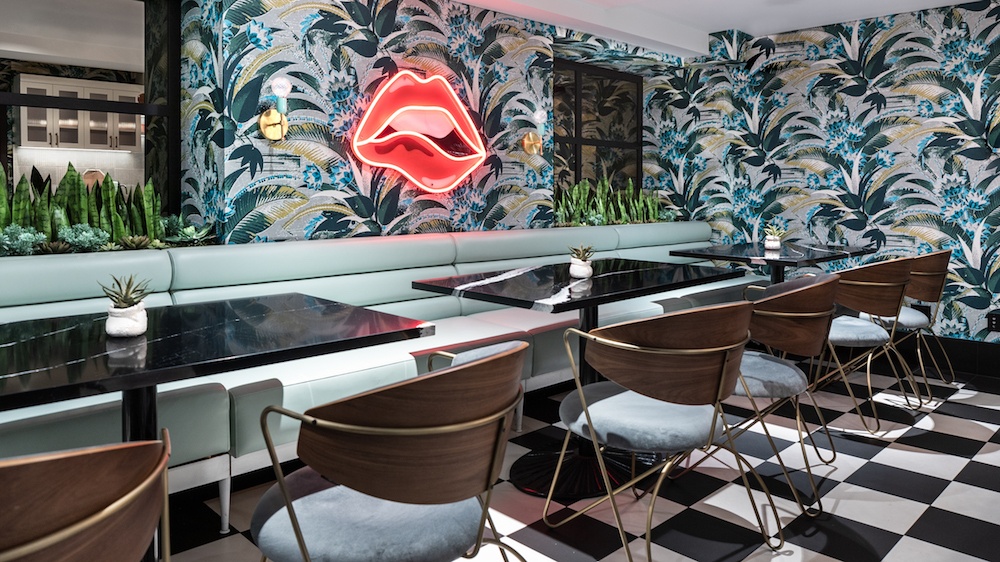 Charles Gauthier, the Downtown Vancouver Business Improvement Association (DVBIA), spoke in favour of the installation and highlighted how businesses and property owners have made significant investments in recent years to revive the GED.

Hotel Belmont is no exception, with Pacific Reach Properties acquiring in 2017 what was previously a Comfort Inn for $32 million. It reopened in Spring 2019 after undergoing an extensive renovation and rebranding into a contemporary, boutique hotel.

“The addition of a chasing feature of a neon sign would not only pay homage to Granville Street’s roots as a destination that was once renowned for its neon signs, but also introduces strong placemaking elements similar to the DVBIA’s laneway activations,” said Gauthier, calling the predicament merely an “imaginary line on the map.”

“These investments have greatly assisted in elevating the stature of the street, changing people’s perception of the street, and attracting customers back.” 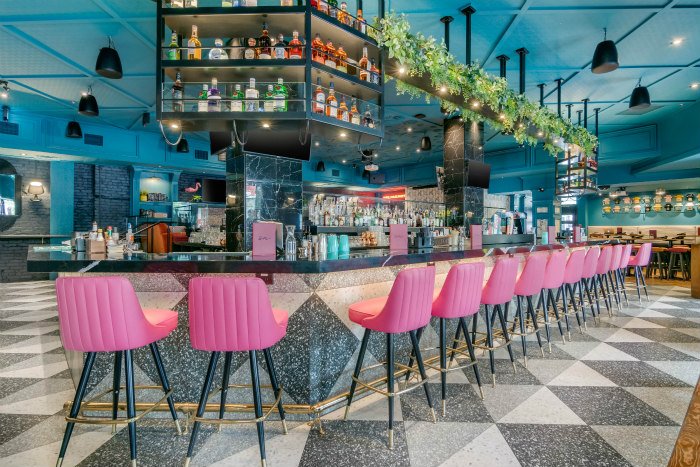 Kirby-Yung had similar comments in her explanation on why she did not support the staff recommendation to uphold the rejection, noting the context of the street for neon lights, the close proximity of the boundary, and the upcoming review.

“I think the spirit of it certainly fits in with the street, but it happens to be on literally the wrong side of the tracks, which appears to be the only issue with the animation. I’m pretty familiar with signage, it’s an expensive proposition to produce,” she said.

“I think from a common-sense perspective, it doesn’t make sense, and I think we particularly want to be business-friendly while respecting the policies that we have.”

Leung says the existing sign is old, part of the former Comfort Inn sign. It was re-clad with Hotel Belmont’s name and branding during the property’s recent renovation. The building was first constructed in 1912.