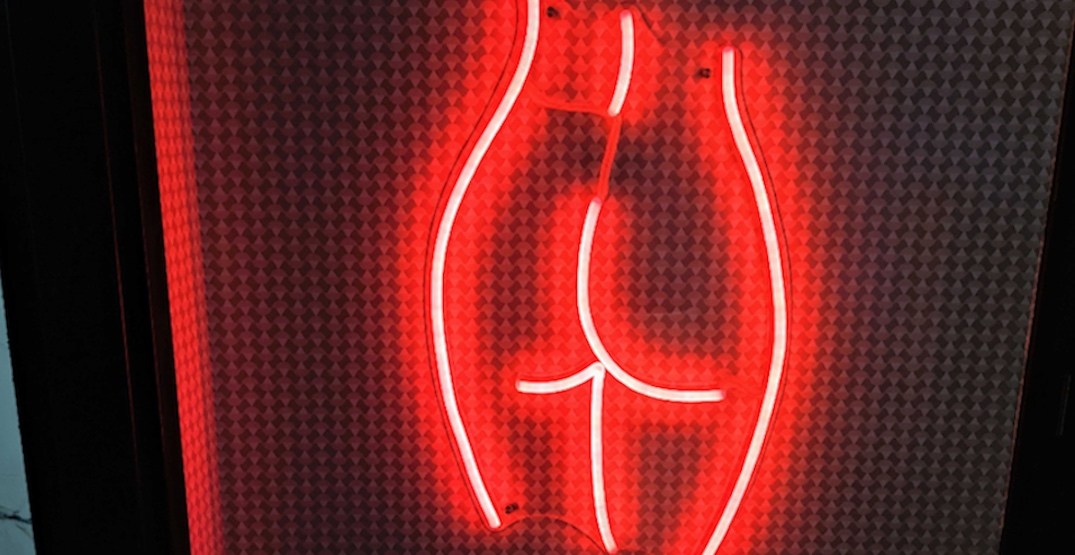 One of the art pieces in The Basement at the Hotel Belmont. (Eric Zimmer / Daily Hive)

Art decor in a downtown Vancouver bar is at the centre of a human rights complaint from a union that represents BC’s hospitality workers.

Located at 654 Nelson Street, the Hotel Belmont features a ground floor bar known as the The Living Room, as well as a basement-level club, called The Basement.

The building which houses the two bars is owned by Pacific Reach Properties, which runs the hotel side of the operation. The bar and the hotel operate independently of one another, but there are frequent crossovers.

Pacific Reach also owns the building which houses The Rosewood Hotel Georgia, where workers are part of a union known as Unite Here, and both sides have been in negotiation talks since spring of this year.

Earlier this summer, the Rosewood was the subject of a human rights complaint filed by Unite Here, which stated  “certain female employees have filed a human rights complaint against the hotel for gender discrimination, an overly-sexualized work environment and failure to respond appropriately to incidents of harassment or assault in the workplace.”

In response, the hotel told Daily Hive at the time it has “worked alongside [the] union to advance safety measures for women working in Canada’s hospitality industry.”

Over at the Hotel Belmont, both the Living Room and The Basement are run by a company called At-Home Hospitality, which has a long-term management contract to run them both. Owned by Jasmine Mooney, the company also designed and decorated both spaces.

“We travelled all around the world to find this,” Mooney said of the decor. “We wanted to build something that was edgy, and out there, and different, and that people would want to check out.”

As a result, she said, the signs and artwork in the bar have now been reposted on social media by people “more than anything I’ve ever seen in Vancouver – and posted by females.”

But now, it’s that decor which is at the centre of the complaint.

The complaint itself states it has been filed “on behalf of workers who have experienced discrimination contrary to section 13 of the Human Rights Code committed by their employer.”

It adds that the premises at the Belmont “are decorated with sexually explicit images including but not limited to images that objectify and demean women.”

And while “while each of these decorations in isolation, or in a different context, could be
acceptable in a workplace, together they create a gratuitously hypersexualized
work environment for the Hotel’s employees.”

For clarity, the complaint says, “the union does not allege that merely displaying an image of the naked human form is a breach of the Code.” 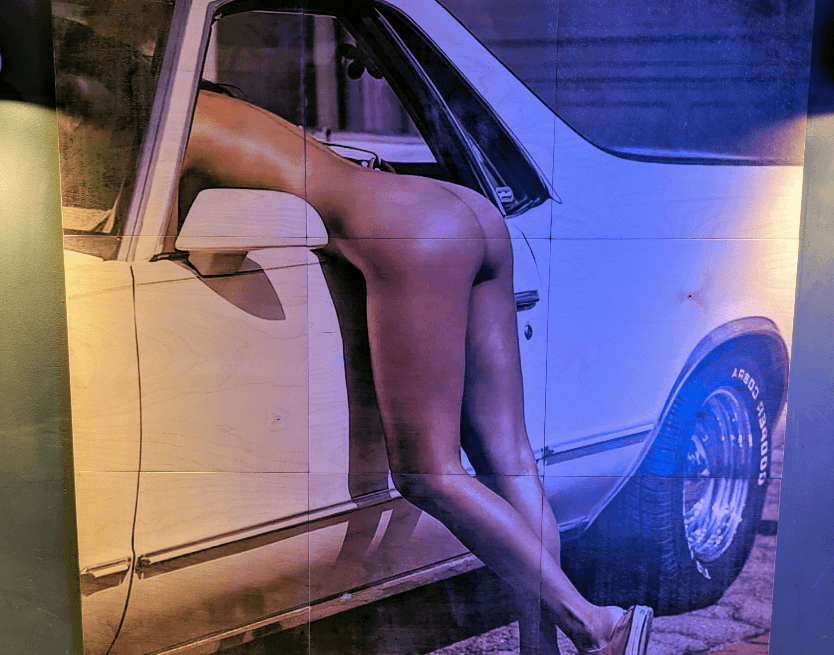 Rather, it says, “the creation of a gratuitously hypersexualized workplace, subjecting employees to a barrage of sexualized imagery as they go about their workdays, is a breach of the code – especially in the context of an industry where workers are already disproportionately affected by sexual harassment and abuse.”

And while the complaint does state the union “is not certified” to represent employees of the hotel, as they are not represented “by any union,” union representative Sharan Pawa told Daily Hive “the workers from the Belmont did come to us, so we are standing with this workers for what they are asking us for – which is support in dealing with the issue in this industry.”

Mooney said a number of her employees told her they have recently received correspondence from the union, primarily on social media – with a message informing them about the situation at the Hotel Georgia, and asking them if they had ever “experienced sexual harassment in their job,” and if so, to contact the union about it.

“This letter was going to staff here, who had no idea where this was coming from,” said Mooney, noting that the messages led to staff being contacted by phone, without being told how their numbers were made available to those contacting them in the first place. 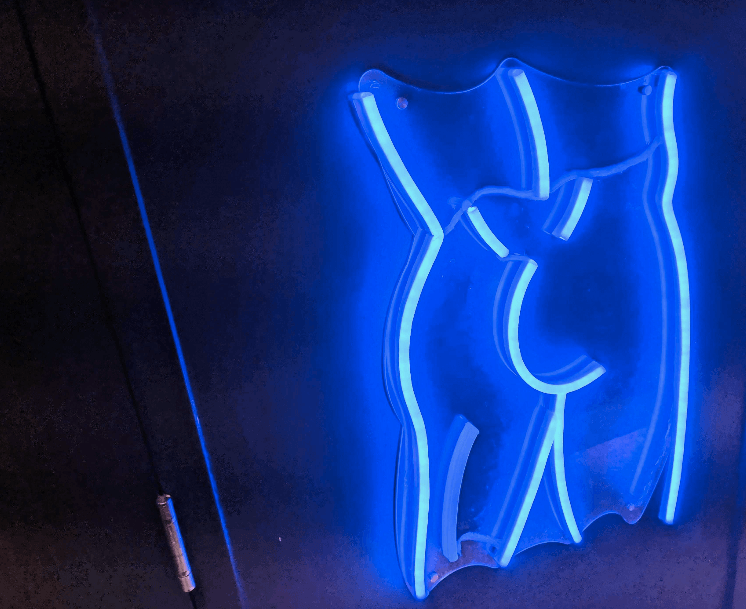 Since then, she said, union workers – or supporters – have entered the Belmont, trying to ask questions of staff, and organized a series of protests outside the bar – protests she describes as “aggressive and threatening” to customers.

“People standing outside the venue, shouting slogans at people waiting to get in,” said Mooney. “They also sent someone  in to the building, trespassing, and handing out flyers to our staff.” 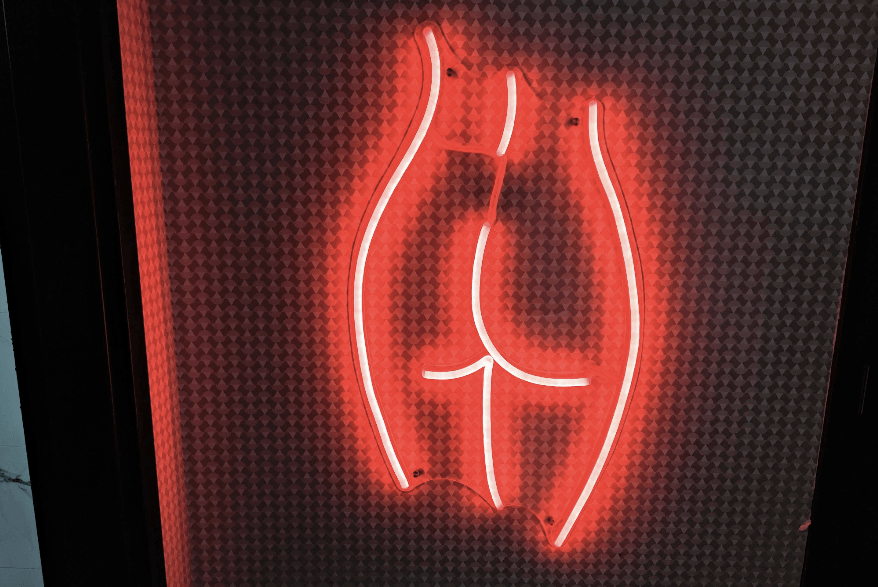 Asked about the nature of these protests, union representative Sharan Pawa disagreed with Mooney’s take.

“We feel like their complaints about us harassing their staff is a diversion tactic,” she told Daily Hive. “They’re avoiding the real issue that staff don’t feel comfortable in their establishment.”

Pawa said at the centre of the complaint are three main asks: 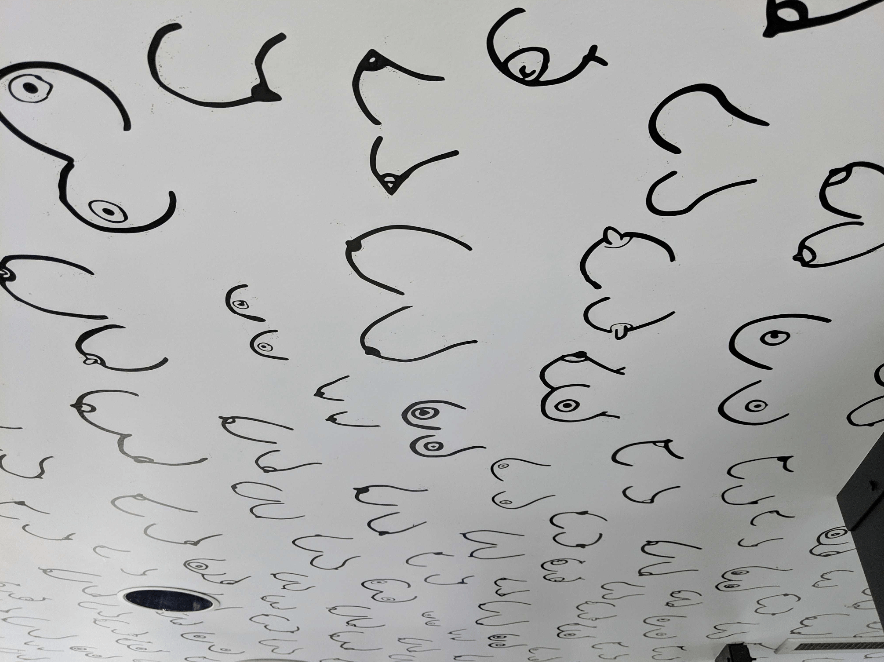 The goal of the rallies, she continued, “is to peacefully inform the public about the issue. All we want to do is  talk to to people. We don’t want violence, and we don’t want people to become aggressive with anyone.”

Asked if she has heard any complaints from workers at other non Pacific-Reach establishments in the city, Pawa said she has not.

“We had workers specifically come to us from the Belmont, so we’ve responded to that,” she said. “If workers at any other downtown establishment – or anywhere else in BC –  come to us about sexual harassment in their workplace we will respond.”

Mooney said the message that workers have received gives background on the Hotel Georgia situation, before stating that the “same owner opened the Belmont with pornographic images objectifying women,” and adds the union is “concerned about the safety of Vancouver’s hospitality industry. ”

For their part, the hotel said that despite the union claiming that it’s Hotel Belmont staff who have lodged the complaints, management has “not received one complaint” from any staff member, regarding the artwork, or around feelings of an unsafe environment.

From a customer perspective, the hotel said that out of the hundreds of reviews it has received from customers, only “one or two” have cast the artwork in a negative light.

And for those who may find themselves offended by the artwork? 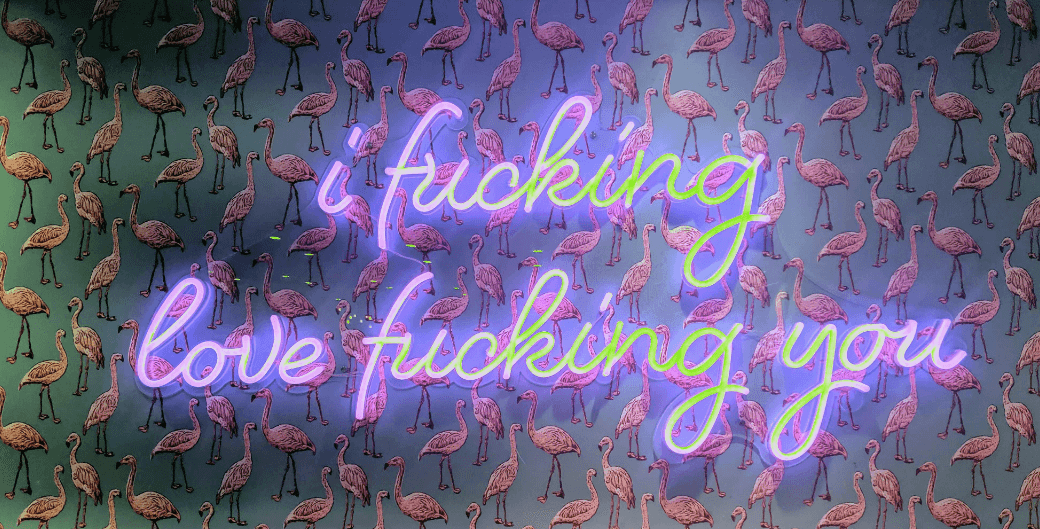