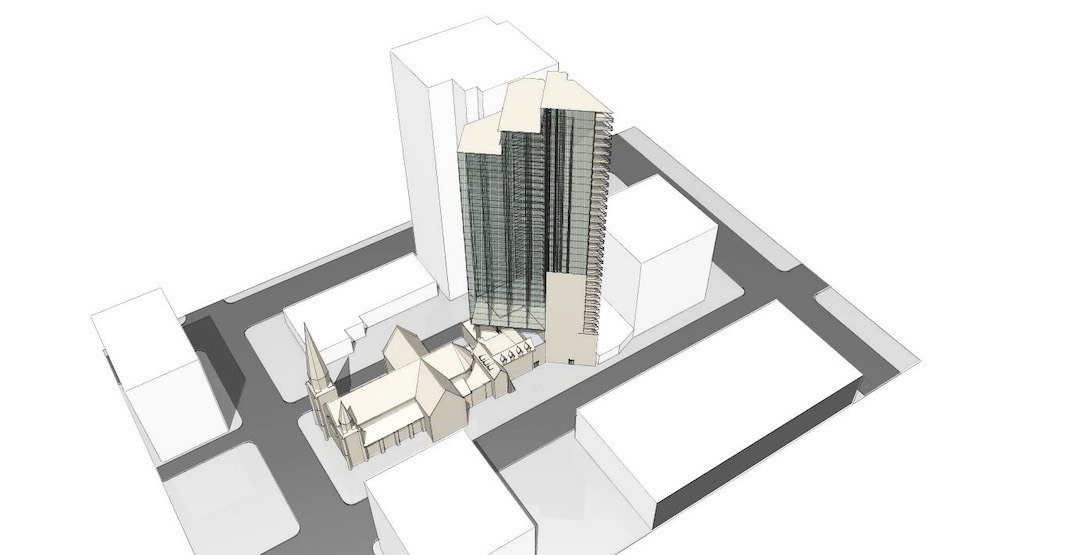 The intent to provide the historic Holy Rosary Cathedral in downtown Vancouver with a developer-funded rehabilitation has been reaffirmed.

In an open letter to the church’s congregation in late August, Father Stanley Galvon says the proposal for a new commercial addition to the church property is now going through the approval processes of both the Roman Catholic Archdiocese of Vancouver and the City of Vancouver. 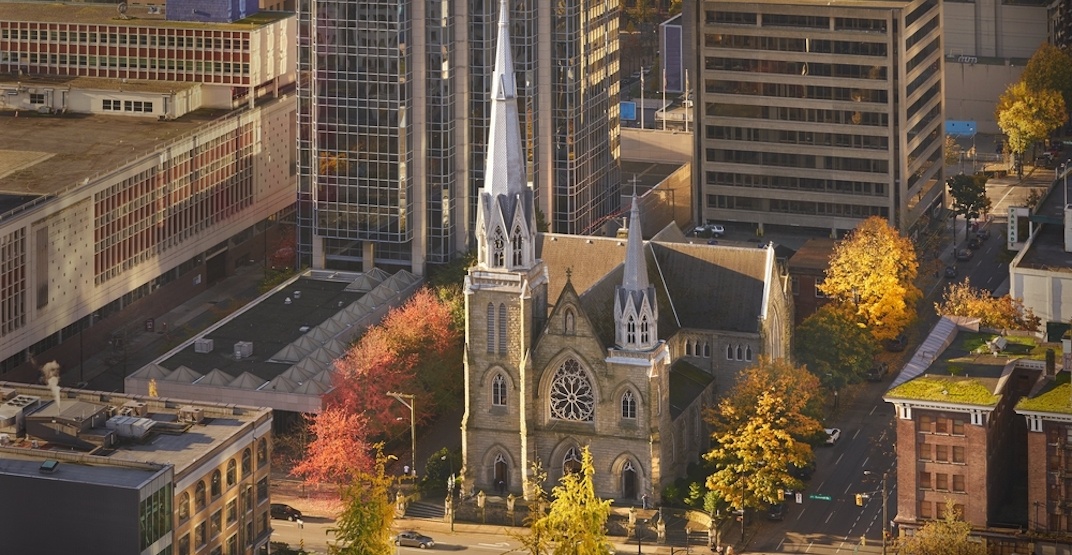 The church, located at 646 Richards Street, began exploring its options in 2014, when an engineering study found the 1900-built cathedral to be “a high risk to both human life and the building itself in the event of a serious earthquake.”

But the estimated $24 million cost of performing seismic upgrades and rehabilitation of the A-listed property in the Vancouver Heritage Register was deemed to be too high for the Archdiocese to fund alone.

“After some five years of diligent efforts, the Holy Rosary Cathedral Building Committee has now proposed a solution that not only addresses the earthquake dangers but also two other problems, the decaying parish hall and the inadequate housing for priests and the Cathedral offices,” wrote Galvon.

The Rosary Hall and Rectory, constructed in 1907 and 1935, respectively, additions to the main cathedral structure would be demolished to make way for the commercial redevelopment.

Five of the 12 building lots, where these two additions are located, that encompass the entire cathedral site will be made available to a developer. The title for these select mid-block lots would be exchanged with the developer for permanent title of several floors of a new commercial building on the lots.

As part of a potential deal, the developer would provide the necessary funding to conduct the extensive cathedral renovation and a long-term “legacy fund” for ongoing maintenance of the structure.

“Despite their age, neither building (Rosary Hall and Rectory) is deemed to have significant architectural or historic value, and both are in need of major roofing, electrical and plumbing upgrades that are also beyond our financial resources,” he continued.

This aligns with the preliminary details of the project detailed by the church in an inquiry to the city’s Vancouver Heritage Commission in February of this year.

At the time, the church said it had established a partnership with local development firm Wall Financial Corporation to construct a new 18-storey tower with 230,000 sq. ft. of floor space on the site of Rosary Hall and Rectory.

Designed by Stantec Architecture, the first five levels spanning 36,000 sq. ft. would be dedicated for new church activity space, while the upper floors would be used as 194,000 sq. ft. of office space. 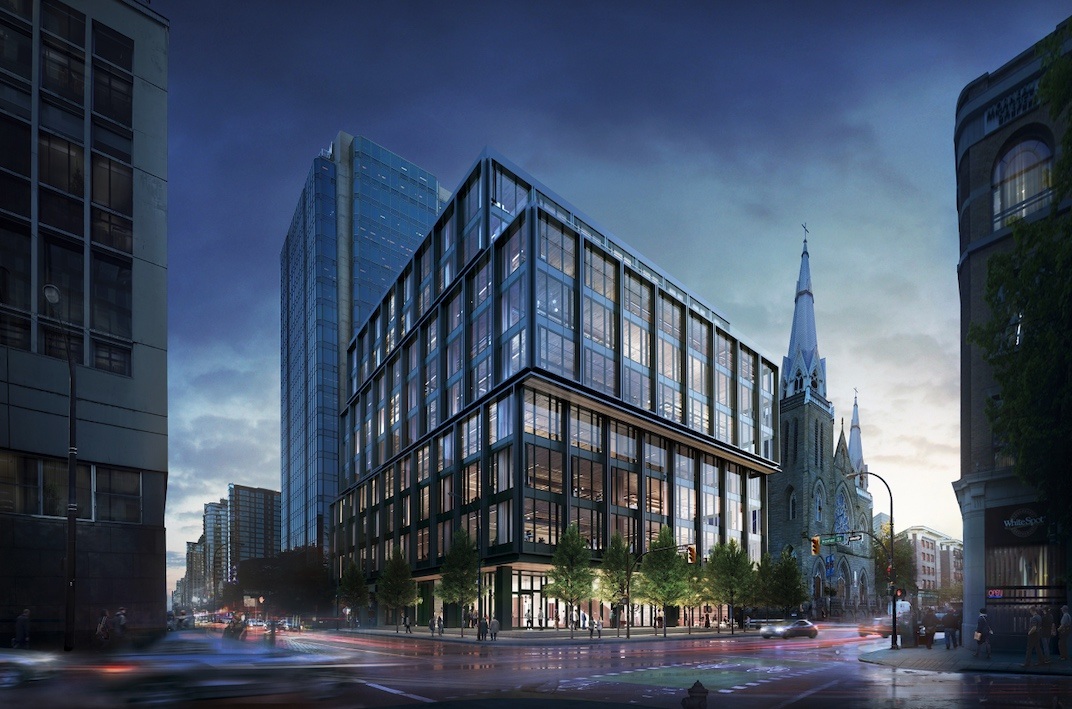 A high demand for office space, largely due to the growth of the city’s tech industry, has sent downtown Vancouver vacancy rates to a level that is amongst North America’s lowest, hovering at around 2%.

Galvon added the church’s Holy Rosary Building Committee will release more information on the proposal over the coming weeks.

“There are many aspects to this proposal that are not known yet that could effect its progress through the approval process. These include the requirements of the City of Vancouver for such a project in this location. Market conditions and a possible economic recession influence this proposal as well,” he wrote.

A growing number of churches in Vancouver have been pursuing redevelopment projects in recent years to expand church space expansions and fund building restorations.

For instance, the 1911-built First Baptist Church is set for a years-long closure to allow for a seismic upgrade, restoration, and expansion as part of Westbank’s The Butterfly residential project, which is located on the church’s rear parking lot. The developer is offering close to $100 million in community amenity contributions, with approximately $22 million going towards the church renovation and expansion. 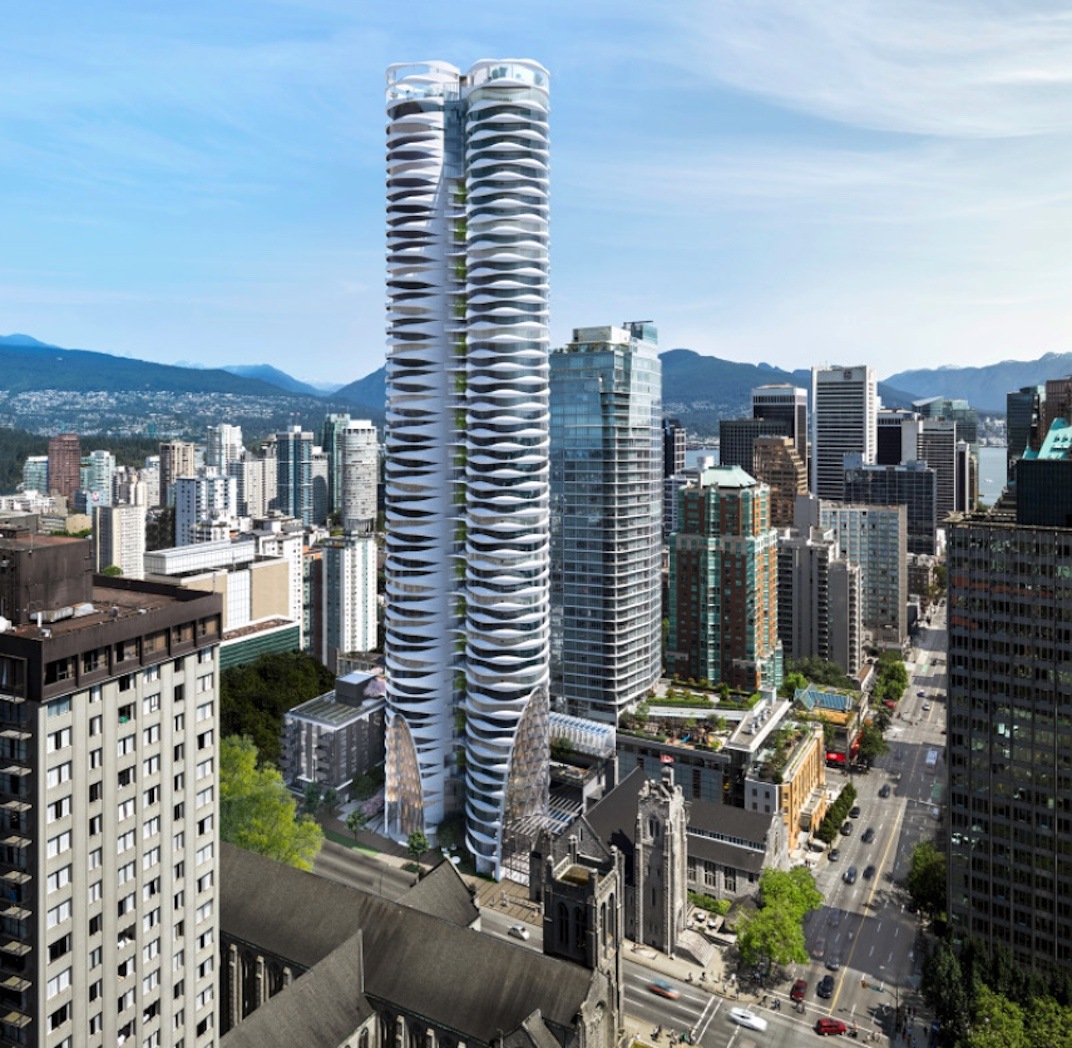 A new 21-storey tower by Bosa Properities in the West End on the site of Central Presbyterian Church recently reached completion, providing a new church space in the base of the tower and 162 rental homes in the floors above.

And in Kerrisdale, Dunbar Ryerson United Church’s 1928-built neo-Gothic style stone church is being restored through a mixed-use redevelopment of the church’s annex building.