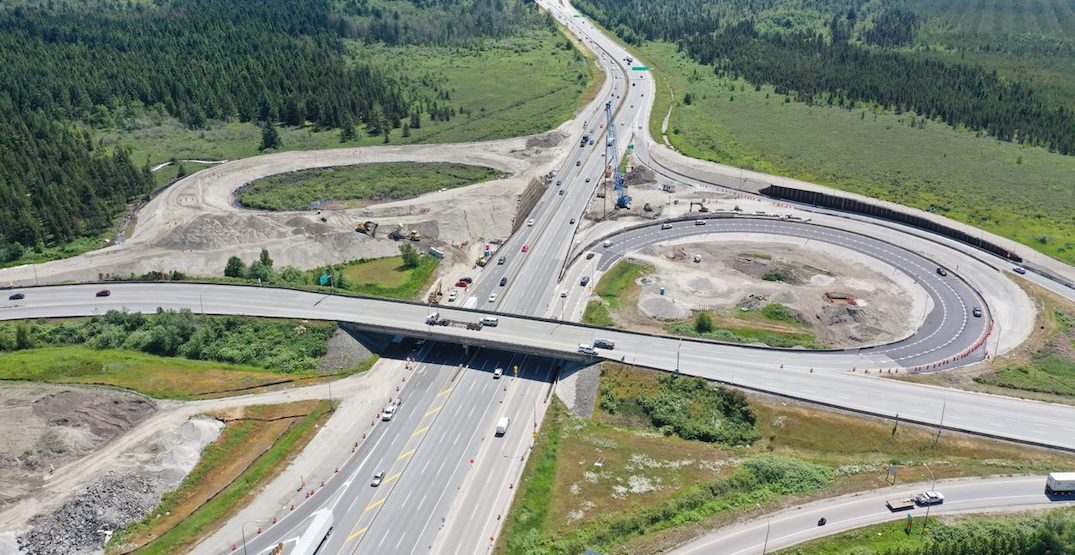 June 2021 construction progress of the new interchange at Highway 91 and Nordel Way. (Government of BC)

In a bulletin on Thursday, the provincial government states the $260-million project is on track for completion in Spring 2023.

When finished, the highway connections south of Alex Fraser Bridge will become free-flow routes, with two traffic-light controlled intersections — between Highway 17 and Highway 19 Connector, and between Highway 91 and Nordel Way — replaced with interchanges.

For the new Highway 91 and Nordel Way interchange, there will be direct ramps to-and-from Delta, improved acceleration and deceleration lanes, and additional through-lanes for Nordel Way traffic crossing over Highway 91.

The interchange at Highway 17 and Highway 91 will also serve to eliminate the need for an at-grade rail crossing. 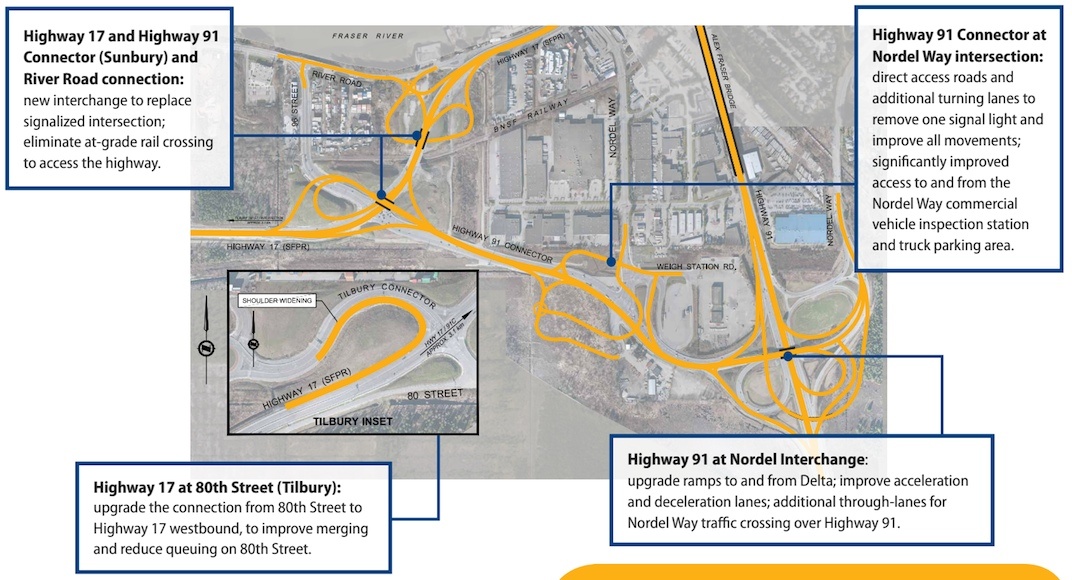 The provincial government has noted that an upcoming construction milestone will be the opening of the Highway 17 River Road Overpass in September 2021, eliminating travel delays for Highway 17 travellers at this location. When this new structure opens, the temporary lane shift on Highway 17 will end and the route will revert to its pre-construction configuration.

The interchange for Highway 17 and River Road is also expected to open this fall for a new direct connection. 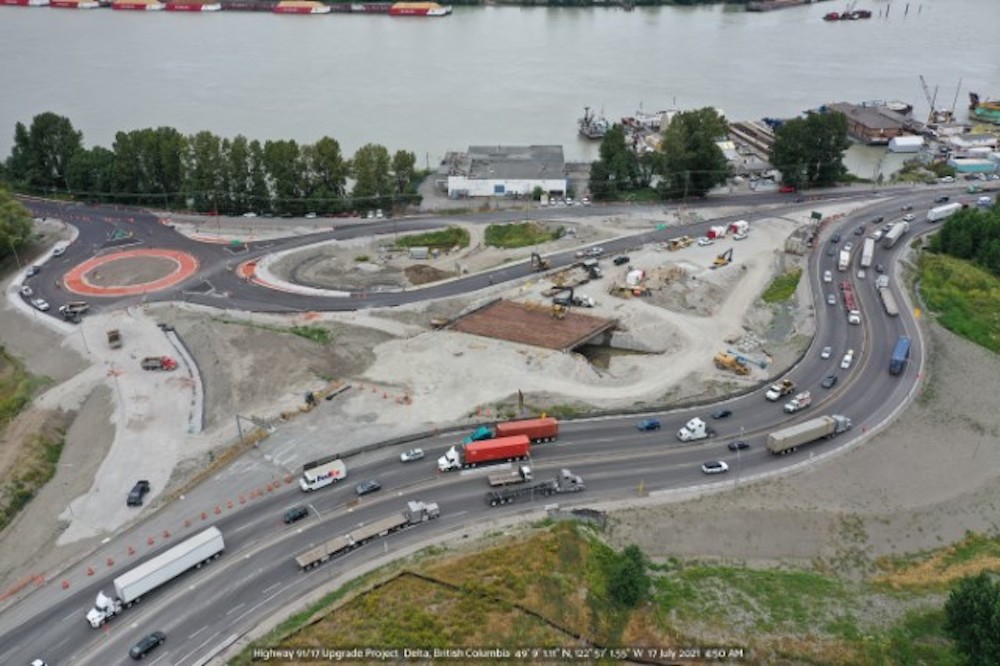 July 2021 construction progress of Highway 17 and River Road interchange. (Government of BC) 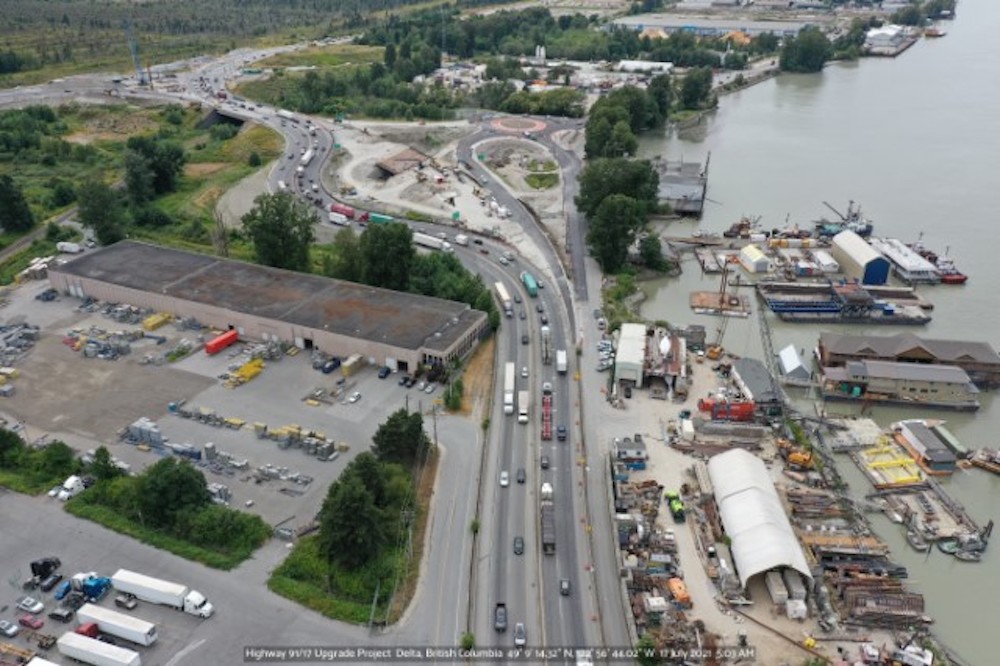 July 2021 construction progress of Highway 17 and River Road interchange. (Government of BC)

As well, upgrades are planned for the access between 27B Avenue and Deltaport Way, with a smoother, safer merge for westbound traffic. Further down on 27B Avenue between Deltaport Way and 41B Street, the roadway will be widened to improve access to industrial lands and the Canadian Border Service Agency’s container examination facility.

The Alex Fraser Bridge typically sees about 120,000 vehicles per day. It is a critical route for the movement of goods and other commercial vehicles. The South Fraser Perimeter Road linking with Highway 91 is particularly a key route for container trucks accessing Deltaport.

In late 2019, more lane capacity was added on the Alex Fraser Bridge, with the opening of a seventh counterflow lane controlled by a zipper-like moveable barrier system.

The improvements are being made to improve the commutes of residents, increase the travel reliability of commercial vehicles, and improve overall safety. 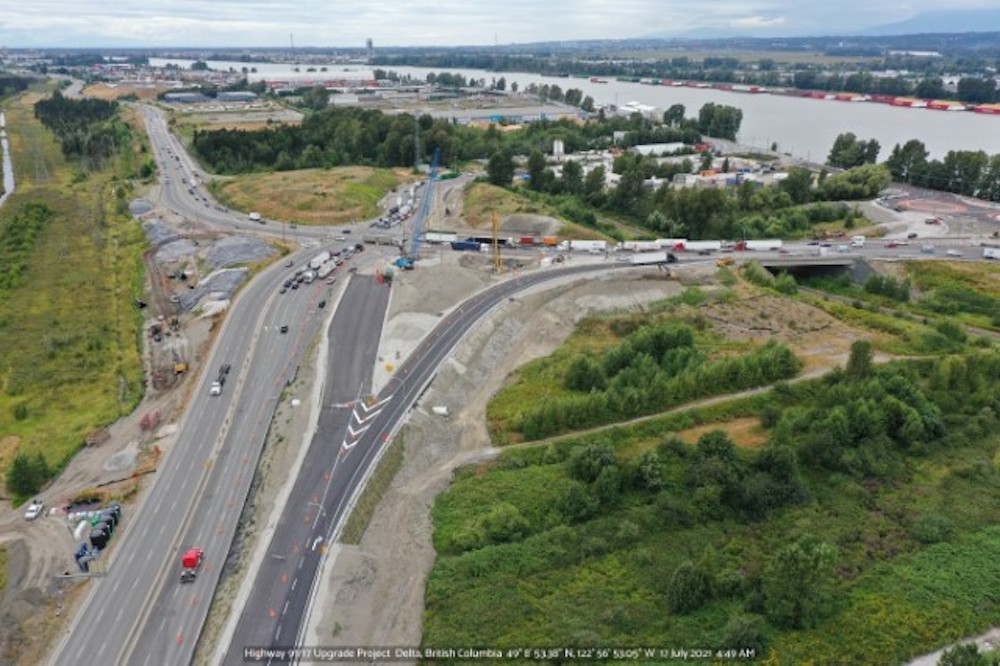 July 2021 construction progress of the interchange at Highway 17 and Highway 19 Connector. (Government of BC)

As part of the project, some improvements have also been made to the Delta Nature Reserve boardwalk in Burns Bog. Late last year, about 170 metres of the west section of the outer boardwalk loop was rebuilt and raised to minimize the risk of flooding. It also features improved accessibility, and new viewing platforms.