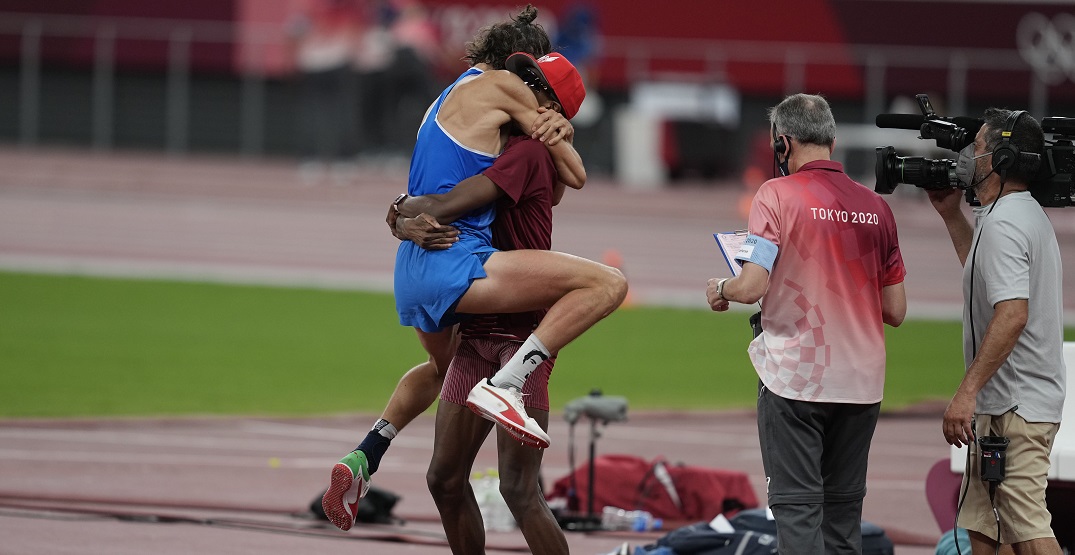 Italy’s Gianmarco Tamberi won the gold medal in high jump at the Tokyo Olympics, but it’s the method in which he was awarded the honour that will be remembered most.

Because, well, Qatar’s Mutaz Essa Barshim won the gold medal as well, in what will surely go down as one of the most iconic displays of sportsmanship in the Olympics’ history.

Facing the chance to match the Olympic record of 2.39 m after clearing a height of 2.37 m, both had already failed three times.

In the final round of high jump, the final two competitors are able to keep attempting to one-up another in a jump off.

Eventually, Barshim just decided to call it a day, and offered Tamberi the option to share the gold.

“Can we have two golds?” Barshim asked the official.

“It is possible,” came the reply.

“History, my friend,” Barshim said, as he and Tamberi came together in an embrace before parading around the stadium realizing they’d just both been named Olympic champions.

"Can we have two gold? … History my friend"

An incredible moment where Qatar's Mutaz Essa Barshim asks the official if he and Italy's Gianmarco Tamberi can share the gold medal in men's high jump 🥇 pic.twitter.com/97y9yEEKr3

No silver medal was awarded, as Belarus’ Maksim Nedasekau took in the bronze. Nedasekau had cleared the 2.37 m height as well, but Barhsim and Tamberi advanced to the final two as they had made all their jumps prior to attempting the Olympic record.

While common in other events, it was the first set of joint Olympic gold medals in athletics since the 1912 Summer Games in Stockholm, where legendary athlete Jim Thorpe of the United States split the Pentathlon top prize with Ferdinand Bie of Norway.

Canada’s Django Lovett came eighth in the final, clearing a height of 2.30 m but failing to get past the 2.33 mark on three consecutive attempts.