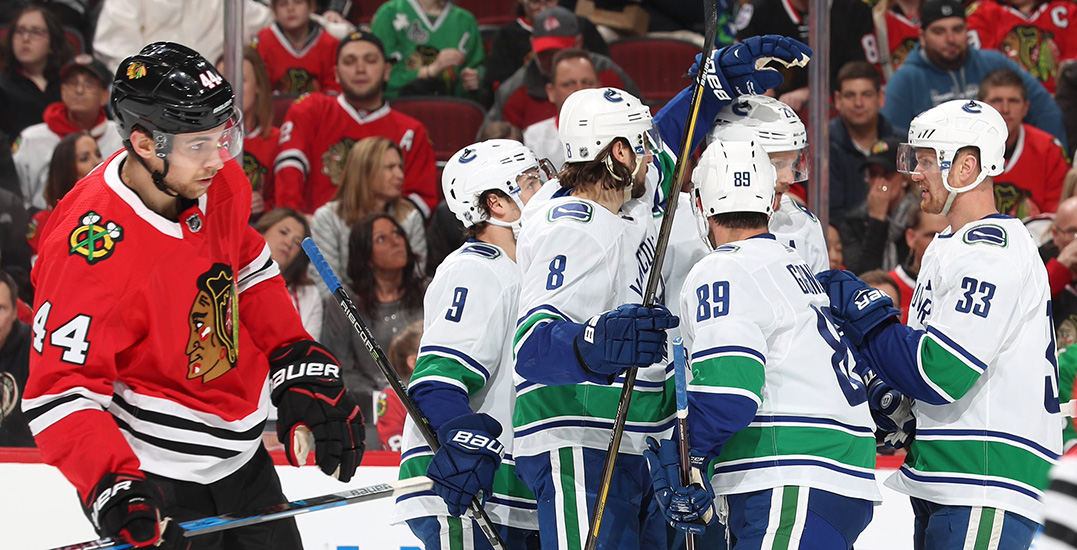 There are a lot of emotions that fans are carrying, as a mostly disappointing season comes closer and closer to the finish line.

Last night’s win over the Blackhawks, if nothing else, was bittersweet. The kind of bittersweet that leaves a weird taste in your mouth.

In a 5 to 2 victory over the Chicago Blackhawks, Canucks captain Henrik Sedin broke a goal-drought of 56 games. His last goal prior to this was on November 14, 2017, against the Los Angeles Kings and brings him up to three goals so far in his 2017-2018 campaign.

While with 42 assists, his point total looks on pace to match or possibly beat last year’s 51-point season, there’s still a lump in the throat of Canucks fans everywhere. It only gives more reasons for frustration when the team’s captain (who’s in the final year of a $7 million contract) has yet to reach double-digits in goals.

The win itself was also lacking. While there’s a relief for both fans and players in breaking a seven-game losing streak, it definitely doesn’t help the “Tankcouver” trend that fans seem to be buying into right now.

The Canucks played the game with the better goalie in net and with the Blackhawks missing several key members. Chicago’s Corey Crawford is on the injured reserve, so J-F Berube and Anton Forsberg filled the crease in his place. Johnathan Toews and Anthony Duclair were also out of yesterday night’s lineup.

With the obvious goal being to secure the highest odds for drafting Swedish defenseman Rasmus Dahlin, last night’s win keeps them in 29th place overall, sitting in front of the Arizona Coyotes and the Buffalo Sabres. A loss would have moved them back to 30th.

The Canucks return to the ice again tonight against the St. Louis Blues, a team still hungry and fighting for a spot in the playoffs.