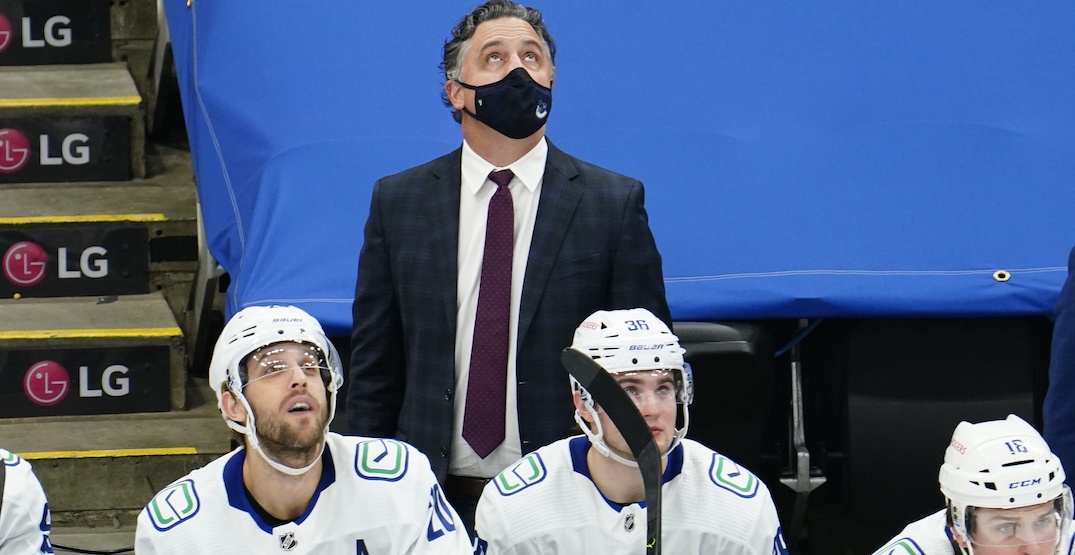 Another Canucks player has reportedly tested positive for COVID-19.

TSN’s Darren Dreger is reporting that a Canucks player tested positive last night. We’ll find out the identity of that player after 2 pm PT when the NHL updates its COVID protocol list.

The number will grow to at least 19 Canucks players on the list, leaving just four players from the active roster not officially in COVID protocol. This will mark the seventh consecutive day that at least one Canucks player has been added to the COVID list, which doesn’t include coaches, staff, and members of the taxi squad.

A total of 25 members of the Canucks organization have tested positive for COVID-19, the team confirmed today.

Dreger added that two players did indeed test positive for a COVID variant. The Canucks later confirmed that the source infection was involving a variant.

That detail has been the source of much confusion since yesterday when BC Provincial Health Officer Dr. Bonnie Henry appeared to refute reports that the more infectious Brazilian P.1 variant was involved in the outbreak.

“I’m not aware that any of the cases in the Canucks organization are related to P.1, I don’t know where that started, but not that I’m aware of,” said Dr. Henry. “It just tells us that once this virus gets hold, it can spread very quickly despite having routine testing protocols, having protocols to try and protect people as much as possible.”

Less than an hour after Dr. Henry spoke about her team, Canucks owner Francesco Aquilini appeared to contradict her, mentioning the variant on Twitter.

“If the Covid variant can knock down a whole team of healthy young athletes, everyone is high risk,” Aquilini said.

If the Covid variant can knock down a whole team of healthy young athletes, everyone is high risk. Please read and follow the province-wide restrictions! https://t.co/vjE1NWXRol

Variant or not, this is still a scary situation for the Canucks, who are undoubtedly concerned about spreading the virus to their families.

Four Canucks games have been rescheduled so far, but many more should be announced soon. The NHL has already rescheduled Saturday’s game in Calgary, which was supposed to involve the Canucks. The Flames are now set to play the Edmonton Oilers instead.