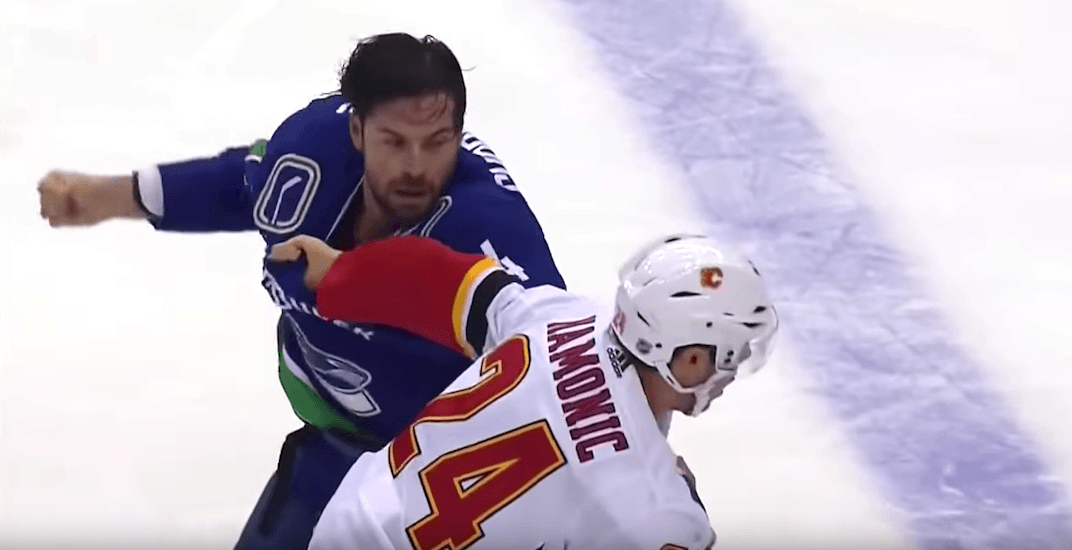 Erik Gudbranson knew he would have to pay the price.

The Canucks’ defenceman lined up Flames rookie Dillon Dube for a big hit in the neutral zone less than two minutes into Wednesday’s season opener. The problem was Dube, who was playing the first shift of his NHL career, never touched the puck.

The next time Gudbranson hit the ice after his interference penalty, Travis Hamonic came to his 20-year-old teammate’s defence.

Hamonic is big and tough, but at 6-foot-2 and 205 pounds, he was undersized against the 6-foot-5, 220-pound Canucks defenceman.

While Hamonic got in a good shot early, which caused Gudbranson to stumble, the Flames blueliner was tagged with a vicious uppercut that did damage.

Here’s the hit and subsequent fight:

The Flames announced on Friday that Hamonic suffered a facial fracture. He’s been placed on injured reserve and is listed as “week-to-week.” Defenceman Rasmus Andersson has been called up from the Stockton Heat to fill his spot on the roster.

Gudbranson expressed some remorse about the bodycheck on Dube after the game, calling it a “bad hit” while Flames players appreciated Hamonic sticking up for their teammate. Remarkably, Hamonic continued playing after the fight, seeing over 14 minute of ice time.

These two teams will play each other again on Saturday night, this time in Calgary, for the Flames’ home opener.