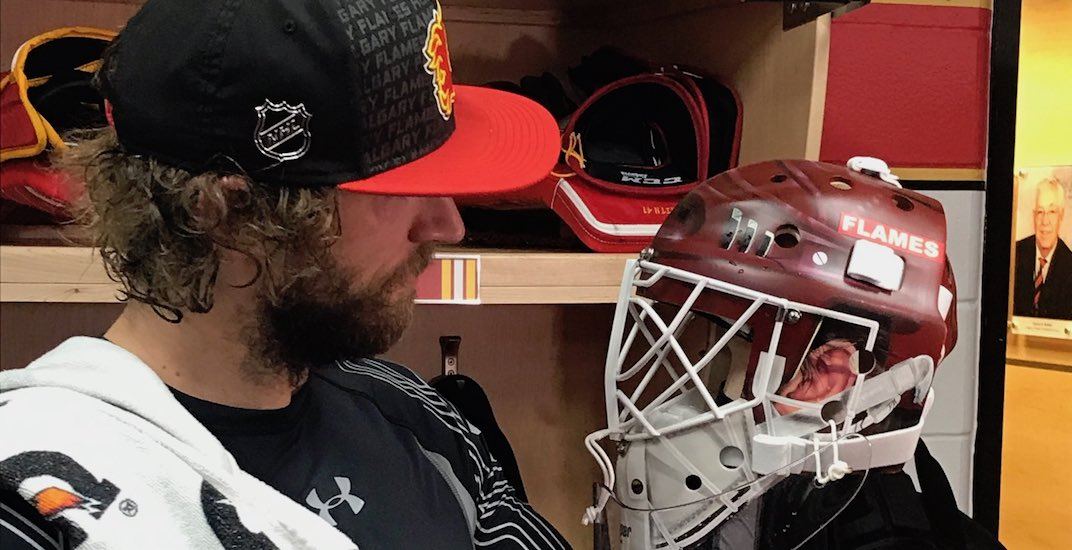 When the Calgary Flames take to the ice in their throwback uniforms for Saturday’s home opener, if you squint, you’ll be able to imagine Theo Fleury, Joe Nieuwendyk, and Al MacInnis on the ice.

You won’t need to squint to imagine Mike Vernon in goal though.

Flames goaltender Mike Smith showed off his new mask to reporters after practice on Thursday. The retro mask looks like Vernon’s classic helmet and cage combo that he wore during the Flames’ glory years in the late 1980s and early 90s.

Mike Smith shows off his new helmet – a throwback to Mike Vernon’s helmet, to be worn when the Flames wear their throwback their jerseys Saturday. “Those are actually my ears.” pic.twitter.com/vJmIq3D5pQ

The only thing that might ruin the illusion is the height difference between the two netminders. Smith, listed at 6-foot-4, is quite a bit taller than Vernon, who is only 5-foot-9.

The Flames will wear their retro uniforms 12 times this season, all at home.

#Flames Mike Smith honouring Mike Vernon with the new mask… Painted as a Vernon replica… those are Smith's ears though. Should fit in perfectly with the retro jerseys. pic.twitter.com/rqz98puedY

Smith will actually debut another mask this season, with a Super Munchkins theme: