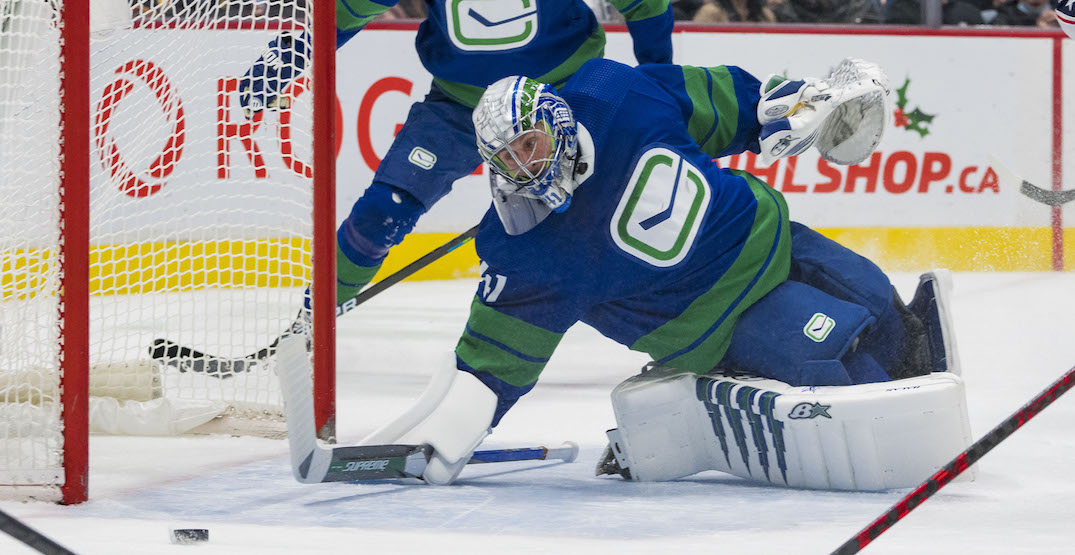 Despite an unfortunate win-loss record, Jaroslav Halak has proven to be a great fit with the Vancouver Canucks this season.

Signed to a bonus-laden contract in free agency, Halak has been a dependable backup behind Thatcher Demko, albeit in limited action.

The 36-year-old Slovakian goaltender has just one win in seven starts, but that’s hardly his fault. He has a 1-4-2 record, mostly due to the fact the Canucks have scored two or fewer goals in six of his seven starts.

The veteran netminder has a respectable .915 save percentage, and ranks third among all backup goalies in the NHL in goals saved above expected (3.7).

Despite this, there is a case to be made for trading Halak soon because of the structure of his contract.

Jaroslav Halak's deal with the #Canucks will carry a $1.5 million cap hit, but could be worth $3 million in total compensation (@KevinWeekes had it first):

Signed to a one-year deal, Halak has just $1.5 million in guaranteed money in his contract, but could make up to $3 million in total if he hits all of his performance bonuses.

Assuming the Canucks are pressed up against the salary cap ceiling at the end of this season, Halak’s $1.5M in bonuses would count against next year’s cap. That would be effectively dead money, given Halak is a pending unrestricted free agent at season’s end.

These bonuses aren’t unexpected, and certainly former GM Jim Benning took it into account before he signed Halak last summer.

But with a new GM in town, perhaps Halak’s value is looked at differently.

Would interim general manager Jim Rutherford consider moving Halak before those bonuses kick in? According to TSN’s Darren Dreger, the answer is yes.

This is interesting. We discussed a bit on the show, so I poked around a bit. I believe the Canucks would consider trading Halak, mostly because Demko is likely to play a lot and the return should be decent for Jaro. The bonus $ likely part of the equation, but not main reason. https://t.co/MnBJPPaJcE

If the Canucks are going to storm back and claim a playoff spot this season, they’ll need Demko to be great, but they’ll also need a capable backup to earn points too.

Michael DiPietro is sporting a .901 save percentage in Abbotsford, and likely needs more seasoning in the AHL after a mostly lost season on the Canucks’ taxi squad in 2020-21. Vancouver could acquire another goalie in a potential Halak trade, though in theory, they would be accepting a downgrade at that position.

If the goal was to squeak into the playoffs this season at all costs, which was seemingly the plan under the previous administration, then the Canucks would be wise to hold onto Halak.

But Rutherford has been more critical of the roster, seemingly using a wider lens to assess his new team.

“We need to get better in certain places, so we can grow into a consistent playoff team and grow into a contender,” Rutherford told reporters last week. “We’re trying to transition the team on the fly, not tear it all down for a total rebuild.”

“If we make trades, it’ll be for draft picks, it’ll be for younger players, so we can bring this team together hopefully within a year or two to be that consistent playoff team,” Rutherford added. “It will be a much different approach for me [than with the Penguins.]”

If the Canucks do decide to trade Halak, he’ll have more value with a non-cap team, as they could fit his $1.5M in bonuses into this season’s budget.

But perhaps there’s a fit with a team like the Nashville Predators, who have leaned heavily on starter Juuse Saros this season. Backup David Rittich, who is on a one-year deal worth $1.25M, has put up a sub-par .884 save percentage this season. The Preds, who are first in their division, have enough cap space to fit Halak’s bonuses in this season.

They could get an upgrade on Rittich, while the Canucks save money for next season, allowing Rutherford to ice a better roster to push for the playoffs in 2023.