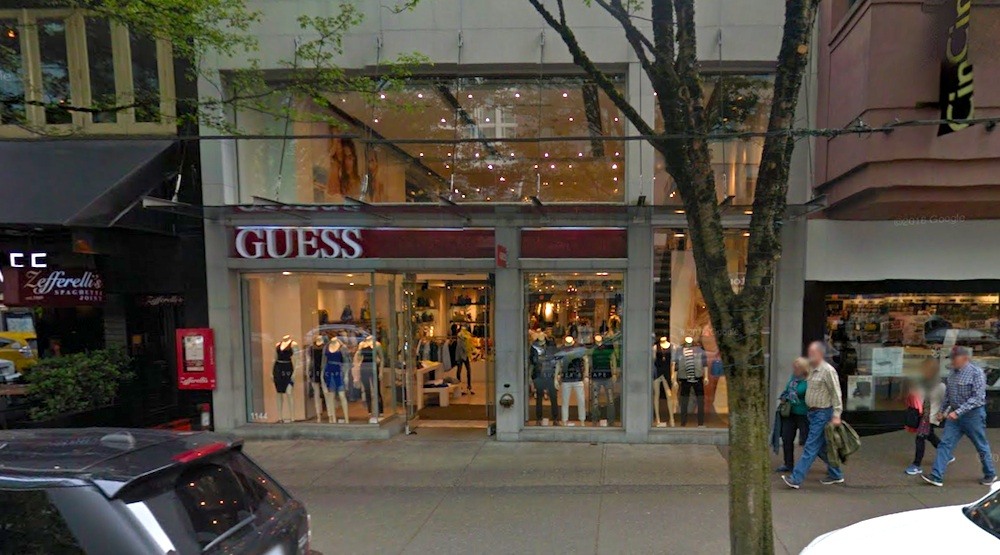 The exterior of the GUESS Store at 1144 Robson Street. (Google Maps Streetview)

In yet another setback on the vitality and vibrance of Robson Street, international retailer GUESS is planning to vacate its space.

GUESS will be leaving its two-storey, 6,000-square-foot space at 1144 Robson Street later this year. There is no replacement tenant at this time; the space has been listed for lease.

Its closure will be a major blow to the 1100 block of Robson, particularly on the south side of the block where large spaces previously occupied by American Eagle, All Star Wings & Ribs restaurant, Joe Fresh, and HMV (as of this week) are vacant.

HMV and GUESS are located immediately adjacent to each other, meaning two wide, mid-block storefronts located back-to-back could be vacant for an unknown period of time, potentially creating a major void in the street’s vibrancy.

Further down on the same city block at 1168 Robson Street, there are no plans to close the GUESS by Marciano store – wedged between the vacant former spaces of Joe Fresh and American Eagle.

Along Robson Street from Burrard to Jervis streets, there are approximately 20 vacancies. The retail strip has been unable to emerge from its downturn, now spanning for nearly a decade, for reasons that include uneconomically high rents, small retail spaces within antiquated buildings, and the shift in the focus of retail towards the area around the intersection of Robson and Granville streets – anchored by Nordstrom and Sportchek – and even Gastown and suburban shopping centres.

While the street has suffered from some heavy losses, there have also been some small yet significant gains. Parisian macaron baker Ladurée opened a boutique location on the 1100 block to much fanfare last year, and at the end of this week French baker L’Éclair de Génie will be opening its first Canadian location one block down at 1210 Robson Street.

And at the end of this year, Japanese household goods and clothing retailer MUJI will open a Robson Street store within a large space currently occupied by Gap, which will close at the end of June.