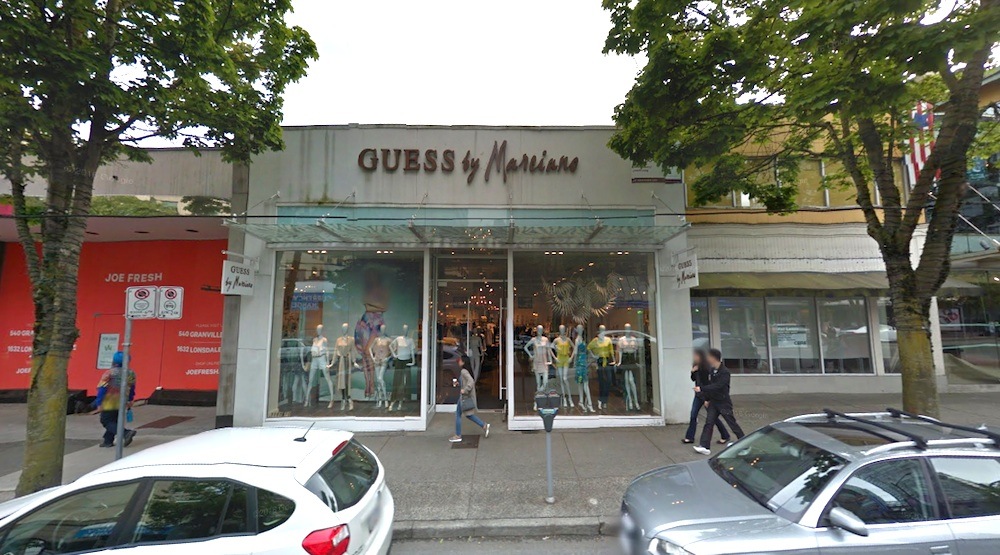 The exterior of GUESS by Marciano on Robson Street. (Google Maps Streetview)

The retailer’s Marciano-branded stores differ from the main stores as they are an upscale version of the GUESS fashion brand. The Marciano store on Robson Street has a floor area of 3,500 square, just over half the size of the 6,000-square-foot main store on the retail strip.

Both retail spaces are listed for lease.

The main GUESS store at 1144 Robson Street, next to HMV which will also be leaving its space. (Google Maps Streetview)

The GUESS by Marciano store on the same city block at 1168 Robson Street. (Google Maps Streetview)

If the Marciano space is left vacant, three stores located immediately adjacent to each other on Robson Street could be empty for an undetermined period of time. Its space is wedged between the former spaces of American Eagle and Joe Fresh.

Moreover, with these changes, nearly half of the storefronts on the south side of the 1100 block of Robson Street could be vacant. This includes the HMV next to the main GUESS store, as it will also close by the end of the week.

Towards the western end of the same city block, the second-level All Star Wings & Ribs restaurants at the southwest corner of Robson and Thurlow streets closed on January 1.

There are a number of factors in play with Robson Street’s downturn, which is experiencing as many as 20 vacancies.. The three block stretch between Burrard and Jervis streets has uneconomically high rents and small retail spaces within antiquated buildings, and it has had to compete with the growth in retail at the intersection of Robson and Granville streets following the opening of Nordstrom and Sportchek and even Gastown and suburban shopping centres.

The last few years have also been a struggle for many retailers as they are unable to compete with the entry of new fast fashion brands and the rise of e-commerce. For instance, GUESS has closed over 50 stores over the last two years, and it plans to reduce its store numbers by potentially another 50 this year.

While there have been some major losses, there have also been some gains as well. Parisian macaron baker Ladurée opened a boutique location on the 1100 block to much fanfare last year, and at the end of this week French baker L’Éclair de Génie will be opening its first Canadian location one block down at 1210 Robson Street.

Additionally, the Gap Store on Robson Street will be replaced by MUJI later this year.