As far as the current state of the Canucks, I’m not sure what’s more unbelievable right now – where the team is in the standings or just how incredible Elias Pettersson has been so far.

Like Rob the Editor Guy said on CBC a couple days ago – expectations for Pettersson were sky high coming into the season. Last year, there were many times Vancouverites were paying closer attention to the amazing things he was doing in Sweden than the team in their backyard.

Yet somehow, he’s come here and blown away the expectations. Just look at this chart showing the points-per-game league leaders: 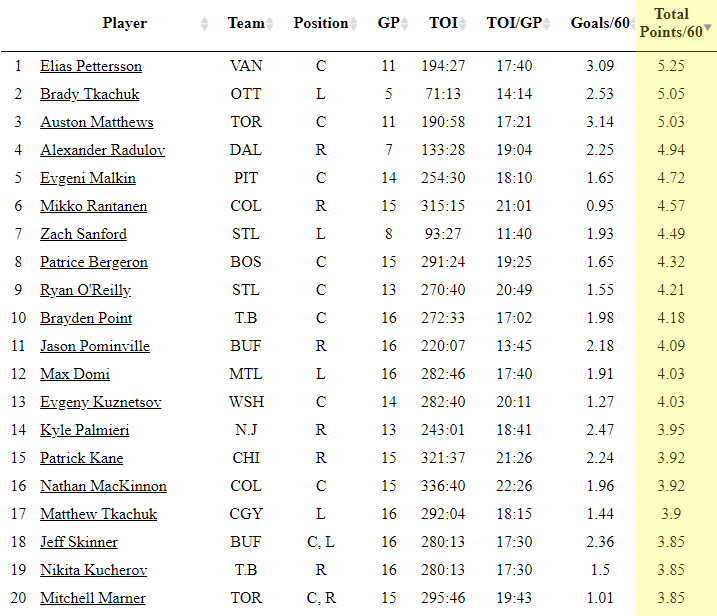 Pettersson leads the league in points/game of players who’ve had at least 60 minutes of ice time so far.

Then there’s the standings: 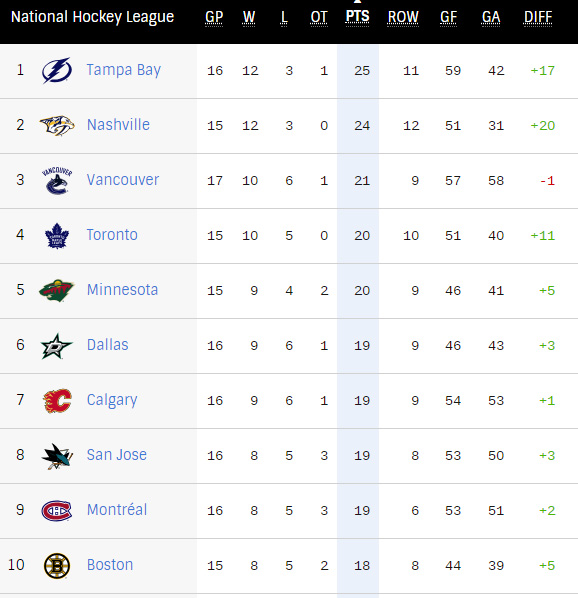 These are the top 10 teams in the entire league right now. Vancouver is third, right below Nashville and Tampa Bay.

As of Thursday’s game against Boston, Vancouver’s taken 664 shots and allowed 770 (at even strength), putting their shot share percentage at 46.30.

By that number, they’re ranked 26th in the NHL – not exactly the recipe for continued success. The wins have come from timely goals and the fact that their game breaker – Pettersson – is able to score and contribute to wins despite the team being outplayed.

So no, that game plan is never going to win a Stanley Cup, but as long as the Swedish Gretzky keeps living up to that name, the team could keep snatching surprising wins.

At some point this season we’ll hear about how injuries have affected the Canucks again, and many will say it’s bad luck.

Honestly, in many cases injuries and ironman streaks are attributable to luck. Look at the Sedins – two players who were probably identical in how durable their bodies were built, yet Henrik played 27 more games almost entirely because of luck.

But with Brandon Sutter, Chris Tanev, and Alex Edler already missing games with injuries this season, should we really give the Canucks the “bad luck” pass?

In the past three seasons, not including this one, Edler has missed 56 games, Sutter’s missed 83, and Tanev’s missed 82.

These are three key players who the team continues to hinge their success on despite the evidence being there that they will get injured and their injuries will possibly derail the team’s success.

That’s just bad planning to me.

Kevin Bieksa – who is still without a team after spending the past three seasons in Anaheim – appeared on the 31 Thoughts Podcast this week. This comment, where he talked about if suspensions and fines are deterrents to players making dirty plays, stood out to me.

Asked if players are scared of suspensions, this was Bieksa’s answer:

“I’ll just tell you from my own experiences – I could care less about suspensions or a fine. When you’re making millions and millions of dollars a year, do you care if you’re fined $2000?

“I mean the only person who would is [Alex] Burrows because he’s so cheap, but mostly you’re thinking if you’re getting a paycheque for $100,000 every few weeks, do you really care if it’s shy a couple thousand dollars because you speared someone or you hit someone from behind? The answer is no, you don’t care at all.”

Best part of the quote: the Burrows dig.

3. Gillis on building a contender

Former Canucks GM Mike Gillis appeared on TSN 1040 with Sekeres and Price for a second time this past Wednesday and I have a couple notes from the show.

First, those who weren’t fans of the Gillis regime are fond of arguing that most of the core that carried the team during his time in Vancouver was there before he arrived.

Can’t argue with that, but this comment from him helped highlight to me that it takes much more than having good players to create a team that contends for the Stanley Cup:

“We created a leadership group in Vancouver and we wanted them to be peer counsellors for the rest of the players. So if someone wasn’t behaving themselves or acting a bit ‘un-team-like’ they had the obligation to go and address it …

“They didn’t have the right to ask to come and see me until they had gone through the head coach about any issue they may have or the assistants. Only then, if it wasn’t going to be resolved, Alain would come to me saying, ‘We think you should speak to this guy.’ But we met with the leadership group all the time. We had various people in that group at various times, but it was always four or five of the senior players …

“It wasn’t a formal schedule, but it was done regularly and it was done particularly when we saw something we didn’t like, and even when we saw things we liked, about how to continue to get better and better …

“There were times they asked for meetings because they wanted to talk to us about something they saw that they thought we could do better. I think there was mutual respect and that’s one of the reasons the team was so successful.”

Since we’re talking about that Gillis team, a quick interlude to include Bieksa’s memories of those years (again from 31 Thoughts):

“It was a really fun group to be a part of, and I think now that I’m at the end of my career and I look back, those are some special years right there …

“We had a really good run there, I think we won Presidents’ Trophies back-to-back, we were competing in the playoffs. Before we made it to the Finals, we lost in the second round back-to-back years to Chicago and I think if we’d got through them we would’ve gone to the Finals too, so it was a super competitive team.

“I think we all came up together – Kesler, the Sedins, Burrows, then Luongo came in, Mitchell, then Hamhuis came in, Scheider, Edler, Hansen – we all came up through the same system and we basically rebuilt the team from scratch …

“We built it from the ground up, we worked hard, and we loved it. We were a close group and the city was so passionate and supportive. It was a great time to be a Canuck for sure.”

It was a great time to follow the team too… (though the Pettersson era is shaping up to be pretty cool as well).

One more from Gillis: he elaborated on something he mentioned a month ago – how he had a plan in place to reload the team when he was let go in 2014.

“We had a plan where we were going to move some players who were at their apex that we thought were going to be declining, and there were teams, much like we were two or three years before, that thought they had the chance to win the Stanley Cup, and those were the final pieces, so they would’ve been prepared to do quite a bit to be competitive in that situation, and that was the plan …

“If it had worked the way we had hoped it would work, I thought we would be back competing for the Cup in three or four years.”

Of course there’s absolutely no guarantee he would’ve managed that, but perhaps we should consider that when Gillis arrived in Vancouver in 2008 and the plan was to turn the non-playoff roster into an annual Cup contender, he achieved that goal quickly and comprehensively.

Now, my point here is not that Gillis should’ve stayed, or anything like that – we’ve talked about all that enough now – my only remaining regret is that in that alternate timeline, the Sedins would’ve had another one or two cracks at the playoffs and possibly a run at the Cup.

But of course, there’s probably no EP40 in Vancouver in that universe…

Since we’re on the topic, have none of you watched the way Pettersson has revitalized this team and wished the Sedins had hung on for just one more year?

…anyone have the stomach to start a comeback Sedins campaign?

Wait, if the team fell back down to Earth, they’d bear all the blame again.

Forget I mentioned it.