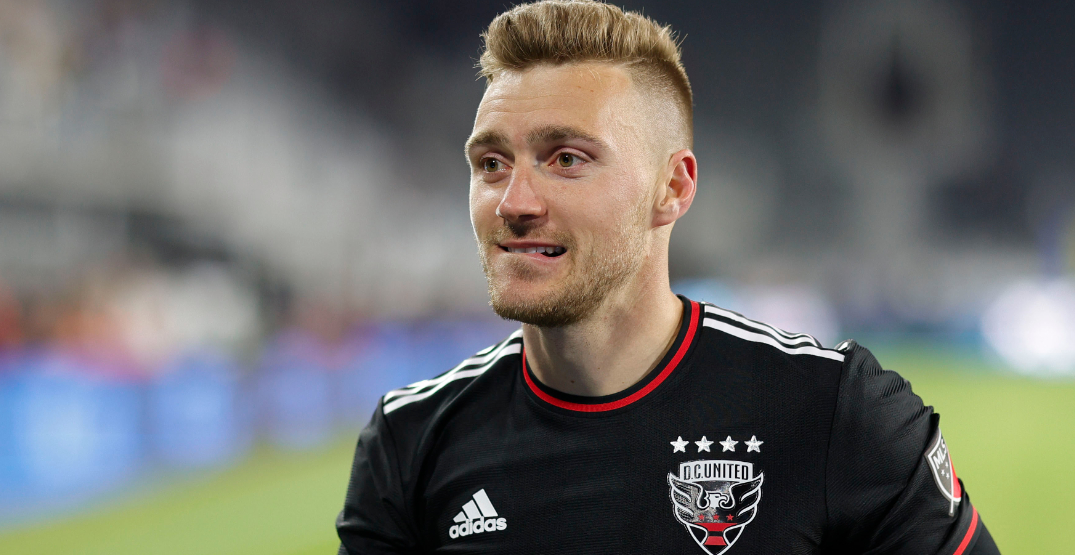 Gresselmania is coming to the Vancouver Whitecaps.

Vancouver has bolstered their attack with the acquisition of wing back Julian Gressel from DC United. The Whitecaps will send $900,000 in General Allocation Money (GAM) spread across this season and the next two seasons.

Gressel will arrive in Vancouver on Monday night, and he is expected to train with his new Whitecaps teammates on Tuesday morning.

The 28 year-old, who has spent five seasons split between Atlanta United and DC United, is regarded as one of the top attacking wing backs in MLS.

Daily Hive has learned that Vancouver has been chasing Gressel for months, dating back to the primary MLS transfer window. At the time, DC United was lukewarm on moving him.

Talks between the two clubs picked up on Tuesday, June 21.

The trade, which was first reported by Steven Goff of the Washington Post, seems to have caught Gressel by surprise.

Glad you found out 2 min after I did… https://t.co/WnieExxGVo

Whitecaps fans can expect Gressel to cut in, deliver crosses, set up teammates, and help with Vancouver’s transition attack.

But where will Gressel slot into the Caps lineup?

“There’s no doubt about it in our system he will be our starting right wing back,” Whitecaps CEO and Sporting Director Axel Schuster told Daily Hive. “Our guys are doing well and we’ve got results, but I think it’s an area where we can upgrade because he will also help us with consistency at that position.”

Injuries have played a huge part this season. Vancouver was missing eight players due to injury on Wednesday night against FC Cincinnati when they earned a 2-2 draw.

Goalkeeper Cody Cropper and Javain Brown both left the match after a scary first half mid-air collision. Neither player will be available on Sunday night against the Portland Timbers.

They will join Deiber Caicedo, Sebastian Berhalter, Cristian Gutierrez, Luis Martins, and Thomas Hasal on the sidelines. Ranko Veselinovic has recovered from a non Covid illness, Andres Cubas is back from abductor strain, and Leo Owusu is out of concussion protocol after taking an inadvertent boot to the head following training on Tuesday.

Isaac Boehmer will become the fourth Whitecaps goalkeeper to start an MLS match this season. The 20 year-old Okanagan Falls product came on to start the second half and made several key saves to keep Vancouver within striking distance on the road in Ohio.

The rash of Caps injuries did not propel Vancouver to acquire Gressel.

“Our injury story is really unfortunate,” Schuster said. “We’re really trying to analyze how all of that can happen. Concussions happen and there’s nothing you can do. A stress fracture happens, a meniscus happens. It’s not like every week we have three new muscle injuries and we’re not training in the right way. Maybe it’s an unlucky moment in the season. A few players are coming back and Gressel will help.”

In 171 MLS games, Gressel has scored 19 goals and added 58 assists. His assist total ranks second in MLS since making his debut in 2017, when he was named MLS Rookie of the year.

Gressel is signed through to the end of this season with a club option for 2023. He is scheduled to earn $969,781 this season.

As the Whitecaps continue to climb back into the playoff race, a cloud continues to hang over the organization with the on going MLS independent review into how the Vancouver club handled allegations of misconduct dating back over a decade ago.

Daily Hive has confirmed the members of the Whitecaps executive team that were placed on administrative leave on October 29, 2021 continue to be on leave.

What’s happening with the investigation?

“I’m asking as well,” Schuster told Daily Hive earlier this week. “I’ve always said to you we are not the lead for that. We’re not even the direct contact to the investigators. The only thing I have heard is, it comes to an end now. MLS expects to get a report soon, but what does soon mean, I don’t know. We’ve supported the whole process and we know that the interviews came to an end. We assume now, we’ll also get to the final report.”

The Whitecaps return to BC Place on Saturday, July 23 when they host the Chicago Fire.