A spirit bear in the Great Bear Rainforest. (Pacific Wild)

The giant OMNIMAX theatre at Science World will be screening Great Bear Rainforest almost every day for the next three months, with most days boasting multiple screening times.

The film, debuting at Science World on Friday, February 15, explores the rich natural ecosystem of the remote Great Bear Rainforest on the central coast of British Columbia.

“This primeval land hosts not only some of the world’s most enchanting animals, but also a rare white bear that is neither polar bear nor albino but a ‘spirit bear,’ a black bear with a vanilla coat so mystically beautiful it is revered by the First Nations people who have lived among the bears and protected them for millennia.”

The Planet Earth-like production is the first giant screen film for IMAX theatres shot exclusively in the province, and it features Vancouver-born actor Ryan Reynolds as its narrator.

This film is a mind blowing experience. Congratulations to the entire @pacificwild team. @IMAX 🇨🇦 https://t.co/ycnnNWNi8q

The film is directed by Ian McAllister, who is the executive director of Pacific Wild, and produced by Jeff Turner, with Byron Horner as an executive producer. It took three years of filming, using 40 cameras, to create the 45-minute production.

Other theatres across the country will be screening the film throughout much of the year. 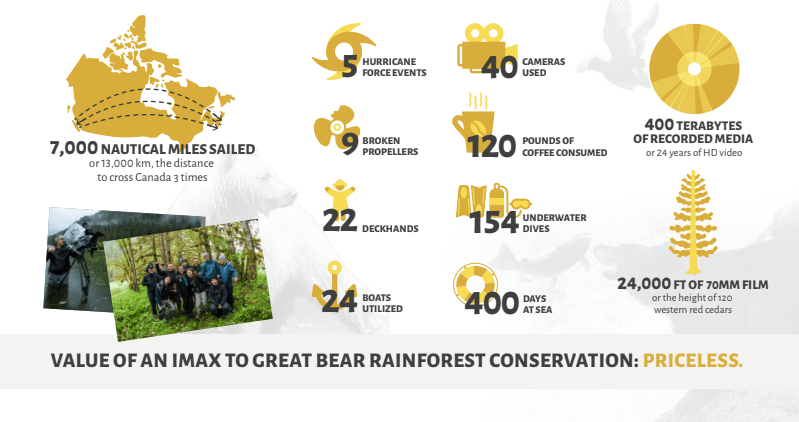