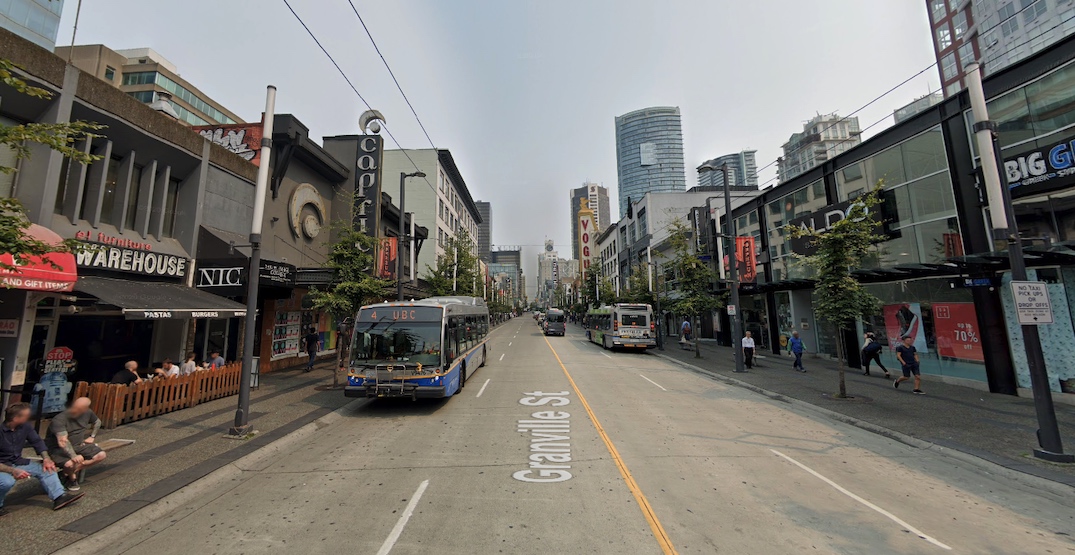 Pedestrians will replace vehicles on a segment of Granville Street in downtown Vancouver over weekends this summer after Vancouver City Council greenlit a pilot project on Wednesday night.

The “Granville Street Promenade” will span two city blocks between Smithe Street and Helmcken Street in the Granville Entertainment District (GED). It provides extra space for pedestrians on busy days and allows businesses to open patios and other fixtures on the street.

Downtown Vancouver Business Improvement Association will be leading the initiative, activating space with events and buskers.

Possible activations will also be explored between Smithe Street and West Pender Street, as this segment of Granville Street to the north is already without general traffic — limited to buses and taxis.

To accommodate the promenade on Friday nights, Saturdays, and Sundays this summer, TransLink buses normally on Granville Street will be rerouted to Seymour and Howe streets.

The cluster of entertainment venues and businesses in the GED are likely to be amongst the last to fully reopen as the pandemic begins to wane.

“The idea here is really to provide a COVID response measure to support the businesses,” said independent councillor Sarah Kirby-Yung, who pushed the motion calling for a pilot project forward, during the council meeting.

“Downtown has been the hardest hit neighbourhood in terms of the reduction in foot traffic, and the highest number of the closure of storefronts.”

The findings from this year’s pilot project will be used to potentially continue similar initiatives in the GED annually.

“I think this is really recognizing that are many struggling businesses and employers down on Granville Street,” said Green Party councillor Pete Fry.

“Granville Street is going through some rather pivotal changes as well as has been contemplated and discussed variously, becoming a bit more of a family-friendly destination. This may present an opportunity to tease out the future aspirations of Granville Street… One thing is for sure, we need to keep it alive to ensure it has a future.”

Prior to the vote on the motion, both COPE councillor Jean Swanson and OneCity councillor Christine Boyle expressed concerns about the potential impact on public transit.

Swanson was also particularly concerned with whether police or private security would discourage homeless individuals from the street.

Prior to the pandemic, the GED’s vehicle traffic, including buses, were occasionally diverted to adjacent streets to help support nightlife and crowd control. The longest diversion of buses from the GED occurred in the years leading up to the Olympics for the construction of the Canada Line and the redesign of Granville Street.

City staff are also planning for the revitalizing and maximizing of the GED as a cultural and entertainment destination.

The DVBIA recently outlined their own long-term GED vision of permanently widening sidewalks for more pedestrian and patio spaces, catalyzing commercial redevelopments, and designating a “restaurant row” from policies that encourage a dense cluster of restaurant businesses.