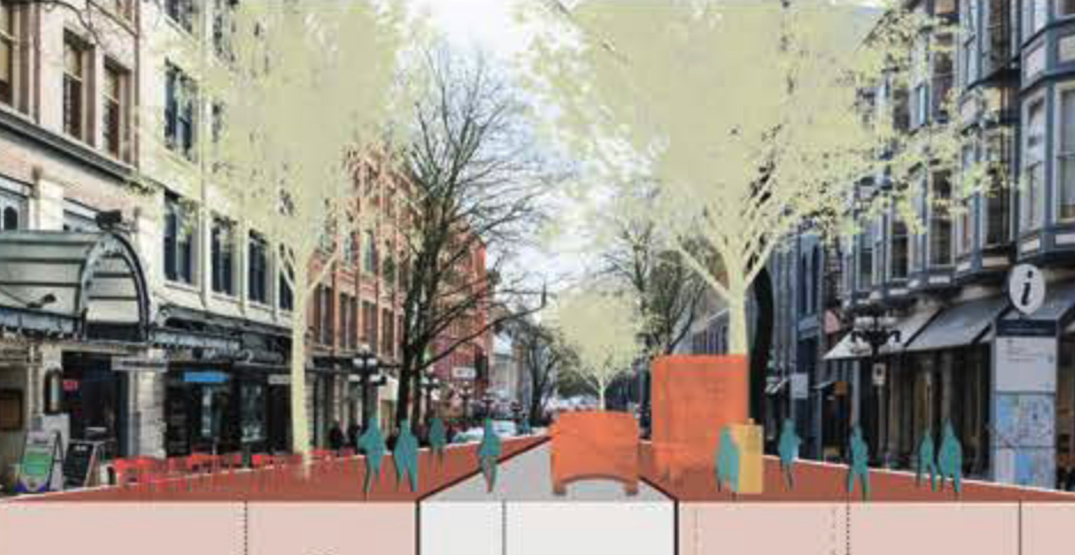 A makeover of the streets in downtown Vancouver’s historic Gastown district would reduce road space for vehicles to make way for a pedestrian-oriented, event-friendly public realm.

“Changes to calm traffic, define places to gather, and create a robust pedestrian network, expand the area, quality and variety of social spaces in Gastown. This is an enticement for visitors, workers and residents to spend more time in Gastown and may have a positive effect on individual and community well-being, as well as, support for local businesses,” reads the study.

“Creating spaces that can easily host events with minimal or no traffic disruptions, provides more opportunities for Gastown residents, organizations, and businesses to express their identities through activities in the public realm. This in turn may help energize Gastown’s sense of community and distinct character.” 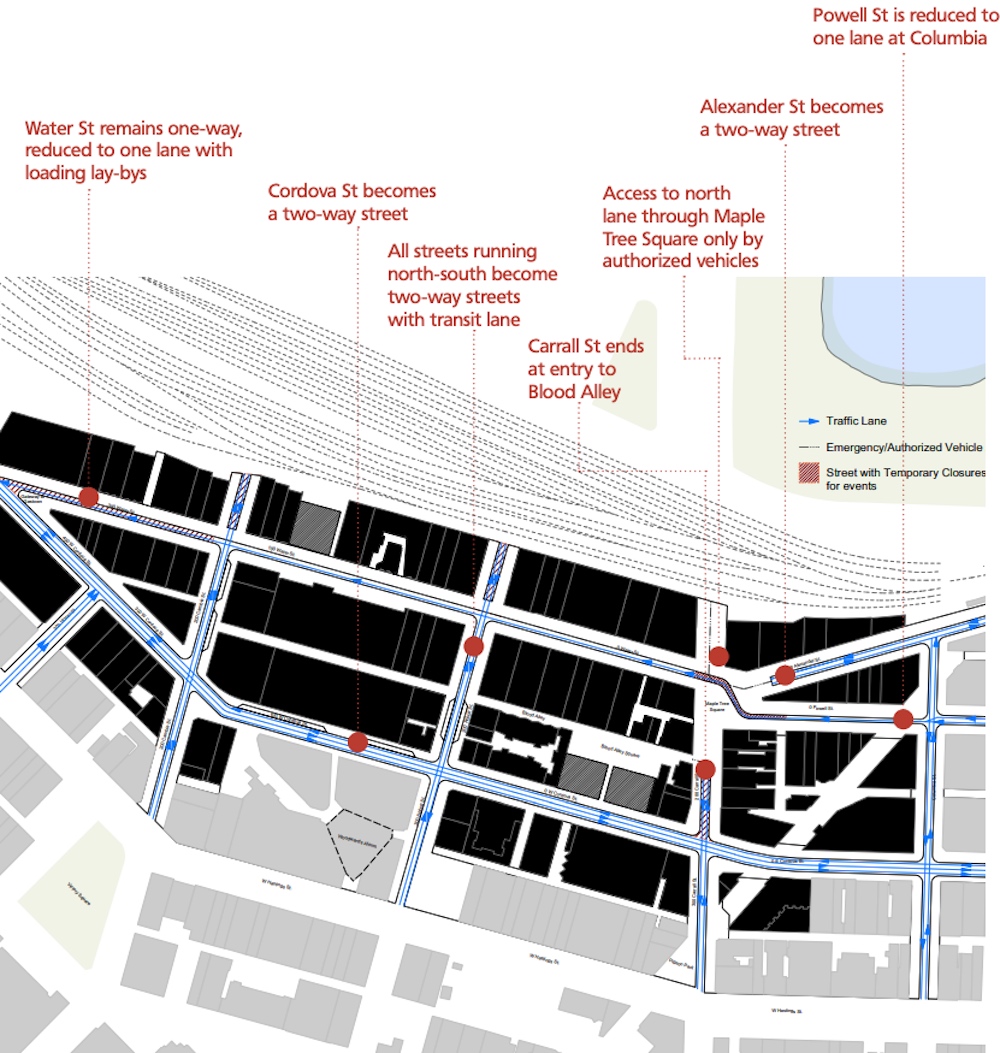 Concept for new traffic pattern in Gastown. Click on the image for a larger version. (Gastown Business Improvement Association) 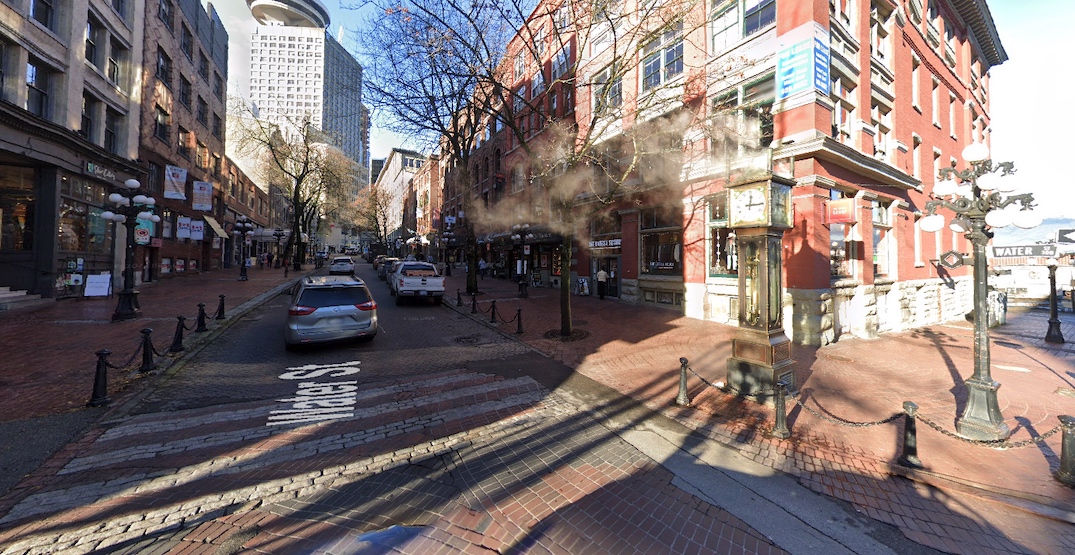 There would be major changes to Water Street, with the road significantly narrowed into a single lane for a wider sidewalk, and the pedestrian area expanded at the western tip of the street where it meets West Cordova Street. Vehicle access is maintained for street loading and deliveries to support businesses.

Special coloured paving on the roadways of the 300 block of Water Street (between West Cordova Street and Cambie Street) and Cambie Street north of Water Street would indicate to drivers and cyclists that this is a busy, pedestrian-primary area. These areas would be redesigned in a way that allows the road space to be temporarily closed to vehicles for events.

This relocation would provide a welcoming landmark for the tip of Gastown, in the same way Chinatown has the Millennium Gate, and a way to redistribute foot traffic. 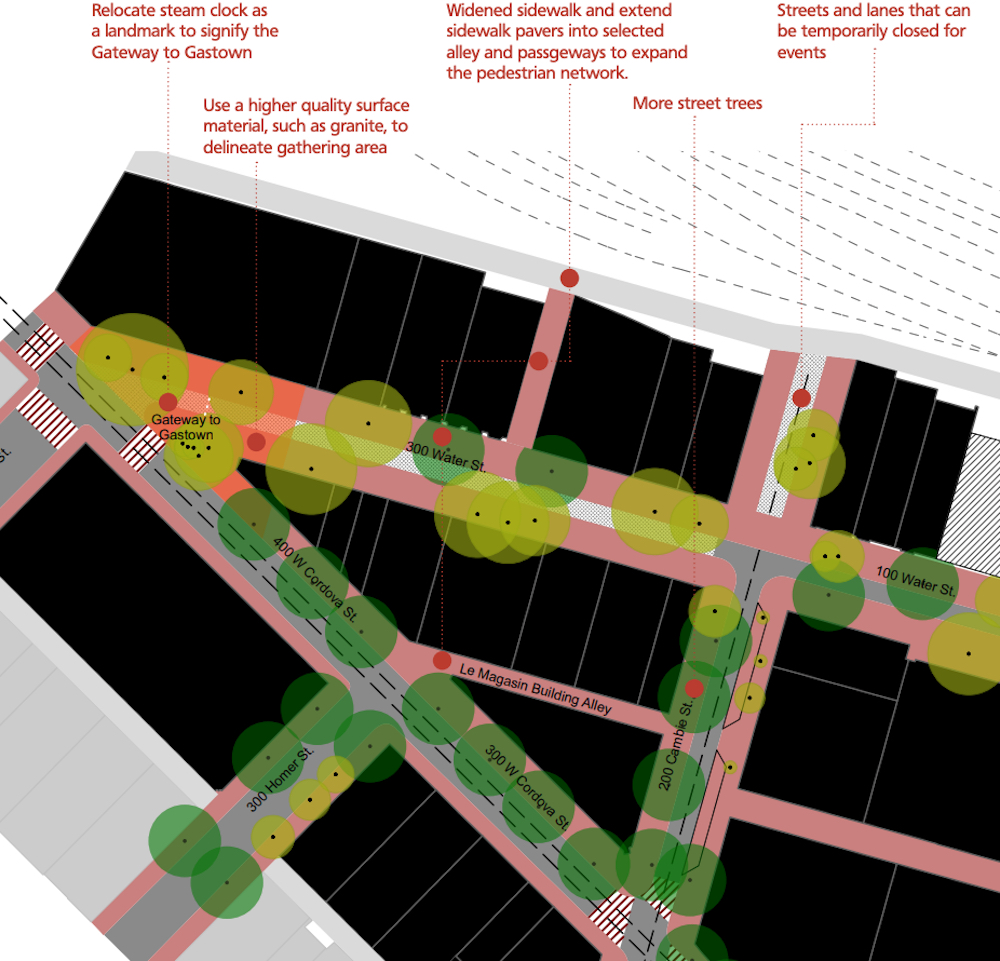 Concept for the changes to the 300 block of Water Street for pedestrians and events, including the new location of the Gastown Steam Clock. Click on the image for a larger version. (Gastown Business Improvement Association)

To accommodate a wider sidewalk and the redirection of vehicle traffic for the occasional closure of the 300 block of Water Street for events, West Cordova Street would see its north curbside parking lane eliminated, and the remaining three lanes reconfigured for two-way traffic, as opposed to the current configuration of eastbound-only traffic.

Under this scheme, tour bus parking is relocated to the West Cordova Street curbside lane in front of the Cordova Parkade.

In the core of Gastown, Maple Tree Square would be further pedestrianized from the permanent closure of Carrall Street to traffic at Trounce Alley and the west end of Alexander Street, but through access on a single westbound vehicle lane from Powell Street to Water Street will remain.

Furthermore, the separated bike lane on Carrall Street south of Maple Tree Square would be removed to truly establish a pedestrian-oriented experience in the area, effectively reducing conflicts. This allows for wider sidewalks and the maintenance of patio space to support businesses.

These changes in and around Maple Tree Square also allow for the ease of its closure to accommodate events. 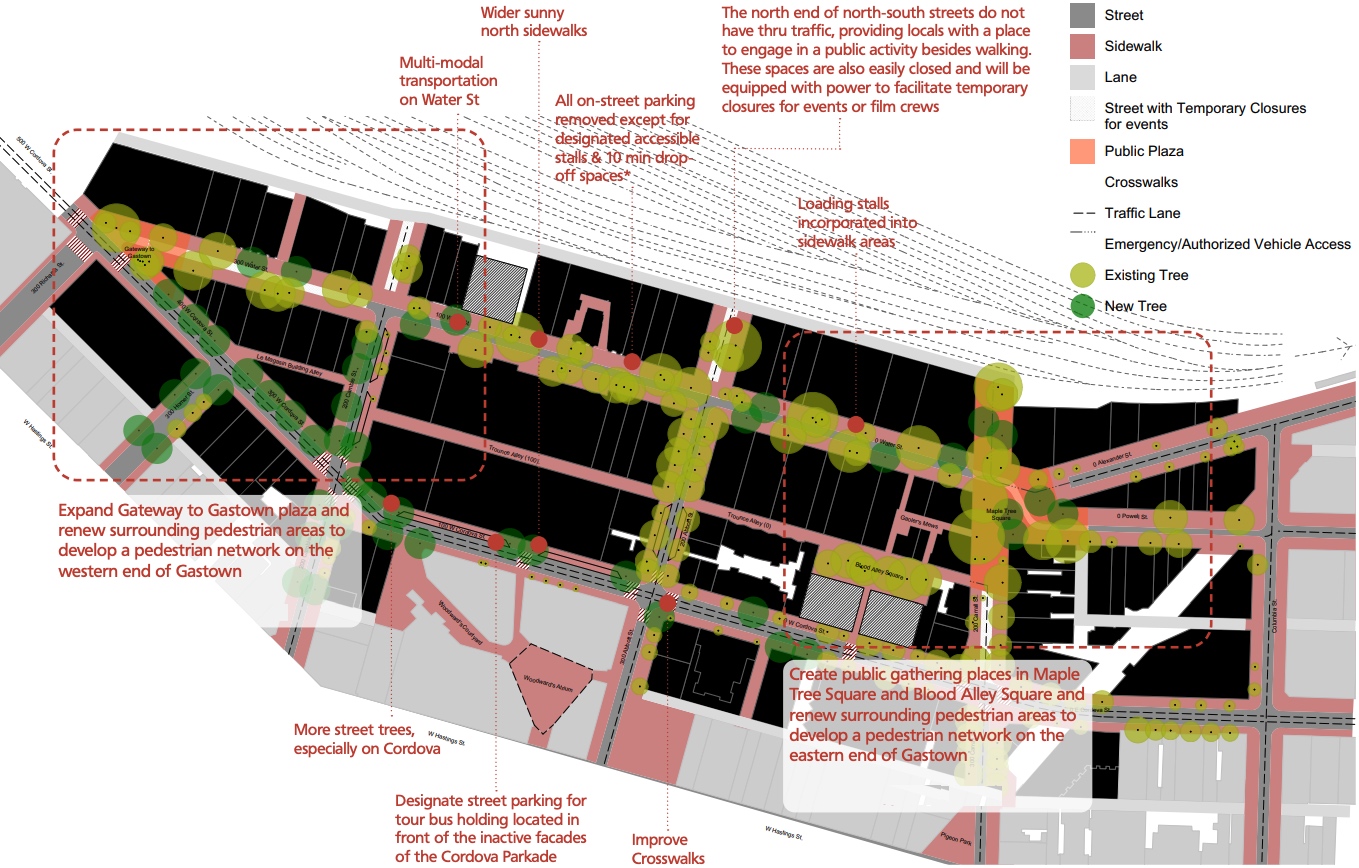 Concept for the new and improved public spaces for pedestrians in Gastown. Click on the image for a larger version. (Gastown Business Improvement Association) 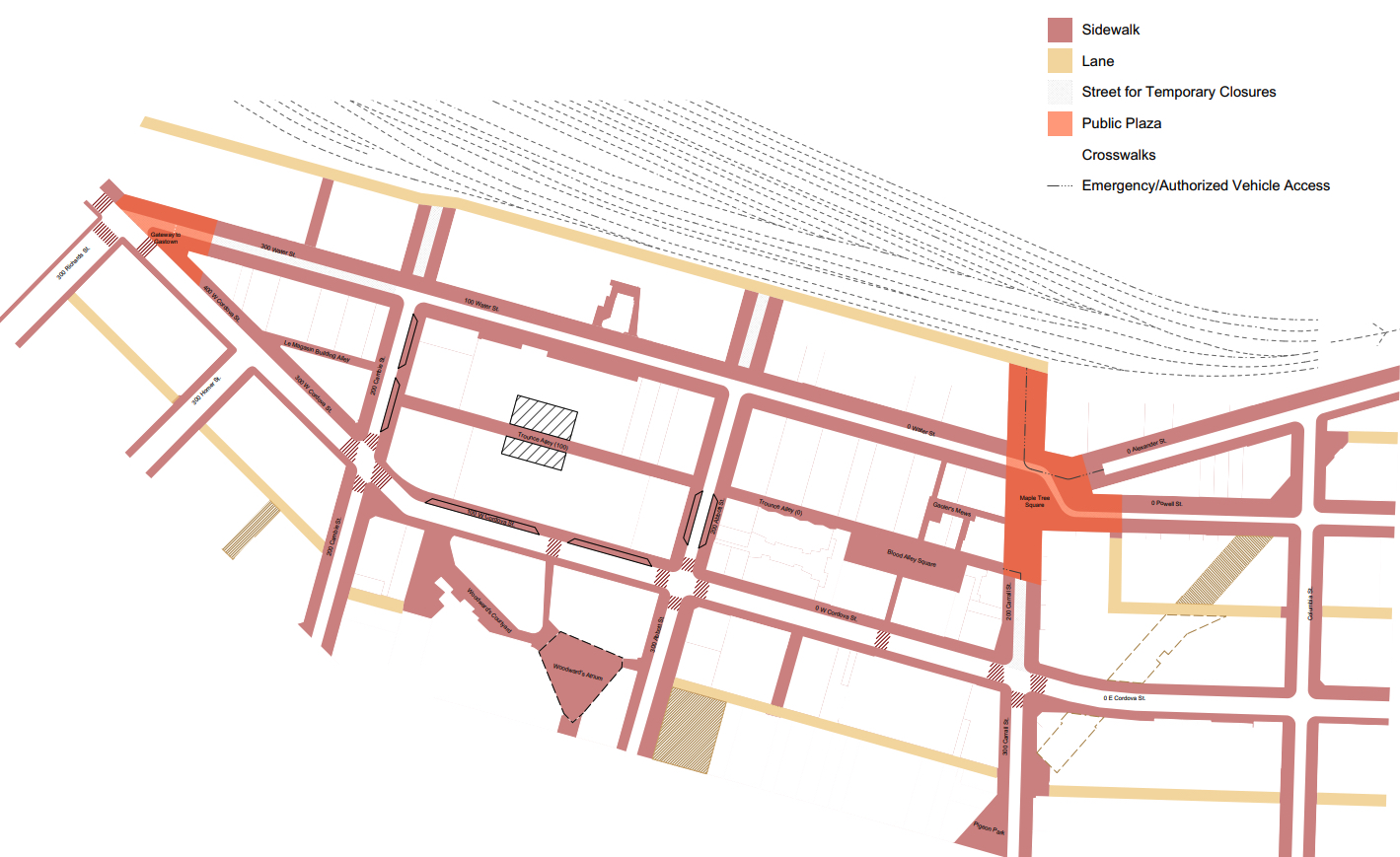 Concept for new public spaces in Gastown. Click on the image for a larger version. (Gastown Business Improvement Association)

The vision acknowledges the long-touted idea of building a pedestrian overpass across the railway to improve access to Crab Park, but the GBIA prefers the overpass to be located at Columbia Street instead of Carrall Street as it “may result in directing tourists to this neighbourhood amenity.”

Additionally, a reconfiguration of Columbia Street would turn it into a two-way street to support the new travel patterns for traffic calming and events.

Prior to the pandemic, the north side of the 300 block of Water Street, near the Steam Clock, saw the area’s highest foot traffic volumes, with up to 15,000 pedestrians per day. For the two block stretch of Water Street between West Cordova Street and Abbott Street, this westbound-only, one-way road sees up to 9,000 vehicles per day, with commuter traffic at peak hours exceeding West Hastings Street in the area.

Currently, West Hastings Street is deemed to be under-utilized, but this will change if the Dunsmuir and Georgia viaducts are demolished, as there will be more pressure on east-west routes from the transplanted traffic onto surface routes that include Hastings, Cordova, and Powell streets. 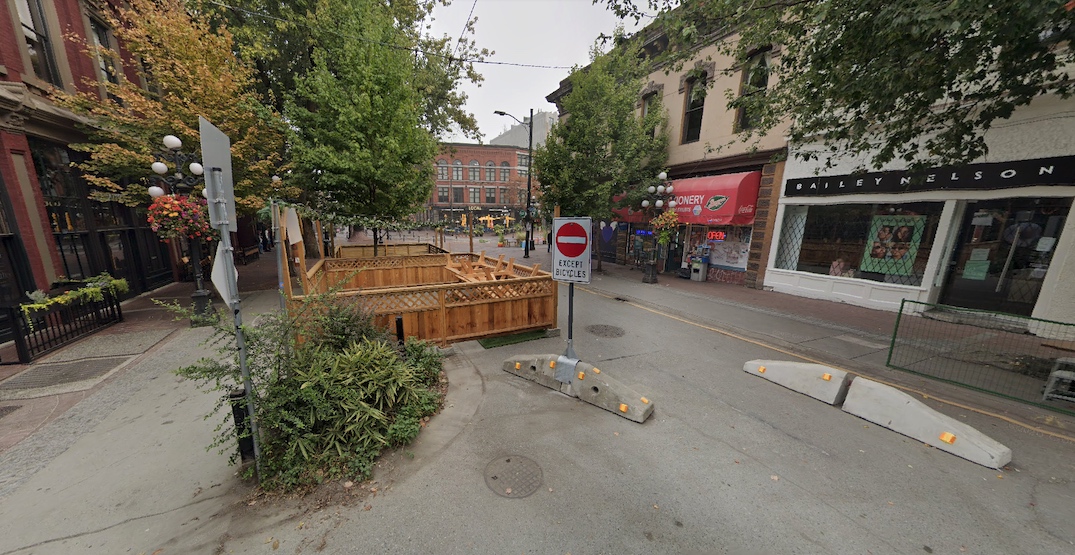 GBIA notes that the changes to curbside vehicle parking will have a relatively minimal impact on the area’s overall parking supply. There are a total of 2,187 parking spaces within GBIA jurisdiction, with 2020 off-street spaces and 167 curbside spaces.

Other notable ideas outlined in the study include catalyzing low-cost vendors such as a $1.00 coffee kiosk, and eliminating garbage dumpsters from all laneways to create a cleaner environment and establish more public space.

The study also notes that private security supporting businesses and a safer public realm is one of the GVBIA’s largest operating costs, as aggressive behaviour and shoplifting are a regular occurrence. Any changes to the public realm should consider public safety and security factors, and establish “eyes on the street” as a Crime Prevention Through Environmental Design principle.

GVBIA’s study is independent of the municipal government’s “complete streets” planning work for the district.